We had a wet morning on July 4th in Northern England but I was desperate to get closer to visiting all the Southern Pennines Marilyn Summits On The Air by activating two more over the border in my home county of Lancashire.

With an improvement in the weather forecast at 2.00pm I left my QTH in Pickering North Yorkshire, for Hail Storm Hill, SOTA G/SP-009. The hill lies between the Rossendale Valley and Rochdale to the south of it. I allowed TomTom to direct me via the fastest motorway route to the north side of the hill, opting for what I believed was the shortest route to the summit on foot with the least ascent. I needed to save as much time as I could for later in the day for an evening activation of Fairsnape Fell G/SP-007.

It was just after 4.00 pm when I parked up on Rooley Moor Road at SD 8466 2038, well away from any housing or industrial compounds. The parking place so far up that road is only really suitable for at least a "softroader" with higher ground clearance, fortunately that is what I now drive. Vehicles with lesser ground clearance, like my last motor, would be better parked further down the hill around the radio mast I would suggest at SD 8442 209, or even before that, as the road is narrow in places and quite steep.

On arrival I realised that there was now a large wind farm on the plateau of Hail Storm Hill, my map dating from 2005 of course did not show this. Now to get those turbines up there they must have come from the opposite side of the hill as there was no way they were taken up on the tracks on which I walked to gain access to what is a rather wet and boring summit. So these days there may well be an easier access point with safe parking from the Rochdale side - go on, go find it and report back on the SOTA Forum or put on a link next to this one on the SOTA Summit Page.

As I made my way up to the plateau above the small reservoir shown on the map as Cragg High Level Tank, I came across a couple of interesting features. After joining the Pennine Bridleway I reached the undulating mountain bike trails of Cragg Quarry and took to these on foot on my ascent. 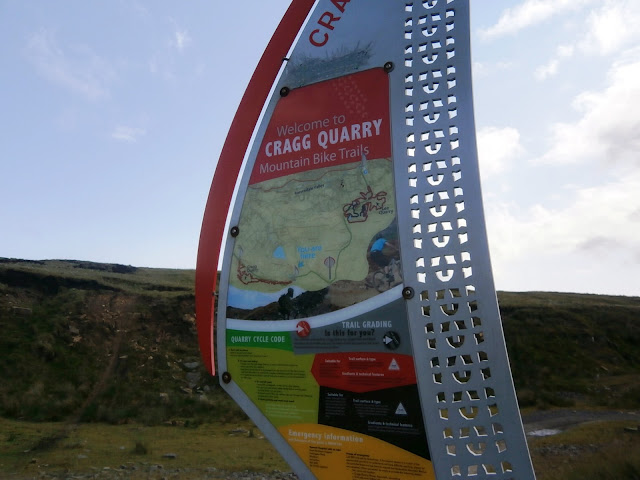 Soon after, I left the track to pick my way around the less boggy parts of Hail Storm Hill where I tried to establish the highest point, which I found quite difficult on the top, which was featureless apart from the wind turbines. It had taken me 22 minutes to "reach my destination", and then later 19 minutes to return to my car after qualifying the summit for SOTA.

So I stood there for twenty minutes in the middle of the moor with my vertical dipole rucksack special and VX-170 and made seven contacts on 2m FM before retreating back to my car:

I left the parking area by 5.30pm and drove across Lancashire via Whalley for my evening activation of Fairsnape Fell in the Forest of Bowland, almost 40 Km and a 70 minute drive to the north west of Hail Storm Hill. I made a wrong turning near Chipping and that added a good 10 minutes to my journey.

Would I return to Hail Storm Hill?

No, once bagged soon forgotten and the hill is not so good on VHF compared to other summits in the north west. Its great to visit new places though and say you've been there and experienced the location for yourself. That's one of the things I like about Summits On The Air.