Our departure day of a 6 night stay near Edinburgh, and the day after the English late summer August bank holiday. I wanted to drive back to North Yorkshire on the east side of the country avoiding the Penrith A66 route and the Lake District traffic. The most appropriate unique summit was GM/SS-148, Meikle Says Law, which I have avoided in the past owing to its fairly long walk in. There was ample roadside parking near to grouse butts at NT 612636. The walk starts with a steep descent to Faseny Water, Faseny Cottage and a black stockholding barn, pictured here on our way back: 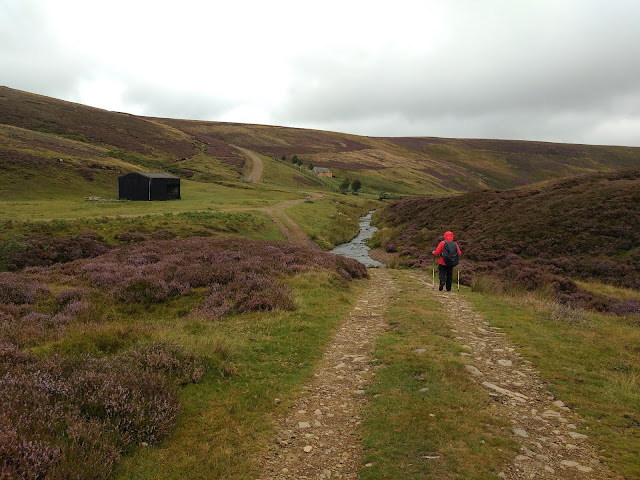 We forded the burn, as the water on the day was shallow enough, although there was a footbridge 150m east of the crossing that one could have used. A track goes up on to the moorland from here which peters out around NT 590629 and from then on its sheep tracks and a faint rough path in parts to the summit at 535m ASL, where there is a trig point. Although the picture above shows fair weather, it wasn't like that 3 hours earlier on our ascent when we were had a "dreich day" up until the time we lifted the umbrella and headed back down the hill, when the wind farm near to the summit exposed itself. 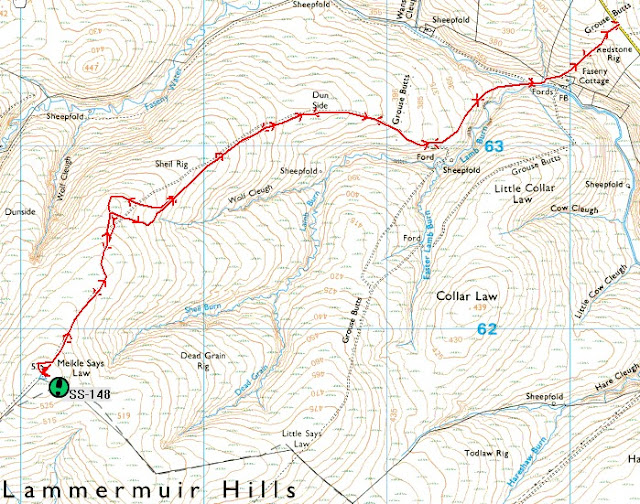 It took us 72 minutes to reach the summit, over a distance of 2.75 miles. Judy had her walking poles, I decided to carry a golf umbrella which proved very handy for settling down underneath with my station and Judy's book when we were on the summit: 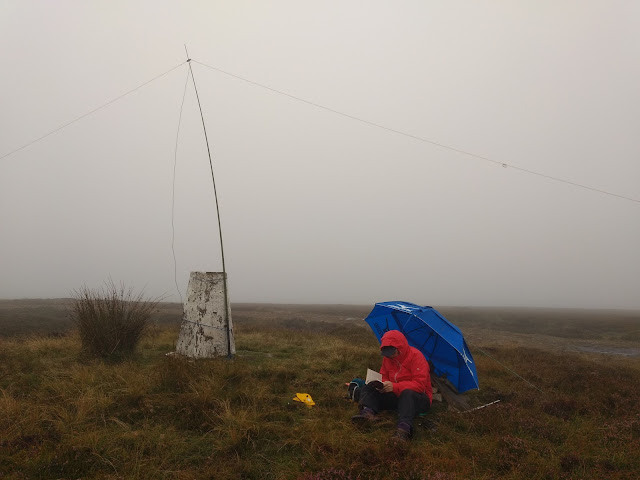 We weren't intending to stay long in such miserable conditions as we had a long drive home and an arrangement to collect our dog Treacle from the kennels before 6.30pm. The 60m band did not sound very good, with QRN to S7 eminating from the wind farm (I assumed) nearby. Terry GM0VWP/P who was on a Shetland summit was waiting for me to start up on 60 metres using 5354 KHZ. We got the S2S no problem. I followed this with the usual supects, including my friend Nick G4OOE in Scarborough on both CW and SSB. When 60m dried up I went on to 40m where the QRN static was not as noticable, but it was there all the same. I finished my final 16th QSO on 2m FM with Christine GM4YMM, having earlier worked her other half Ken GM0AXY on 60m SSB. 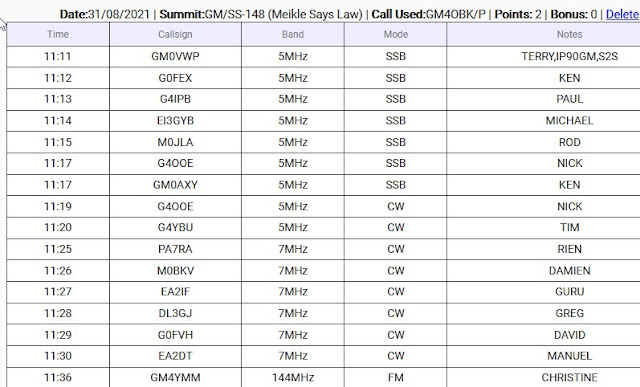 Packing up we headed back down much the same route - taking us almost the same time as it took us on the outward journey.
Haste ye back to Scotland.... and I will, and soon enough, after what had been an enjoyable short break with some mostly good and a couple of not so good walk routes.
Posted by Phil G4OBK at 23:59