After staying and operating SOTA with Geoff (now 2E0NON) in the Welsh Borders for a few days I was homeward bound. With limited time due to the journey, just two summits were scheduled, and we took both cars out as Geoff had to return home to Malvern and I home to North Yorkshire. 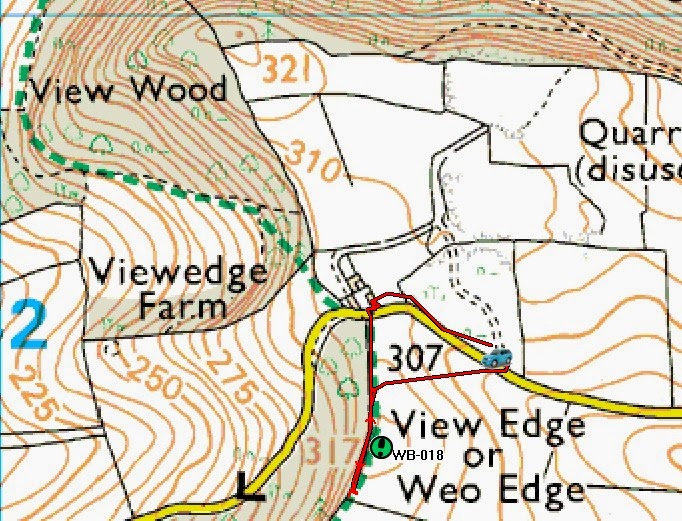 Also known as Weo Edge, this summit lies 2 Km south west of Craven Arms. The highest point is in View Wood on private land. A public road traverses the col which is in the activation zone. There was room to park both cars at the track end at SO 42628057 this was gated but it had not been used for months as far as we could tell and there was nowhere else within easy range to park.

It was a beautiful morning and there was a lift on VHF extending the distance of the stations we worked and creating some interference. Our signals on 2m FM reached Essex when we worked Selim M0XTA in locator JO01bo, a distance of 225 Km. It was early morning and only six stations were worked in the 25 minutes we were on the air. We left the summit and headed north of Craven Arms to activate Callow Hill WB-015 next.

There was plenty of parking space at spot height 214 and we had a steady walk up Callow Hill to reach Flounders' Folly, a most interesting and prominent Shropshire landmark.

The history of the Folly which was built in 1838, can be found here. The tower is locked, however there are open days shown on the website. I'm sure with an extra 80 feet and clear air all around you it would be well worth a visit with a 2m radio and rucksack special on one of the open days when it should be possible to operate with permission from the top. A charitable trust looks after the tower. It is now in excellent condition after a major restoration in 2004/5.

We operated about 100m from the tower on the public footpath. The first contact was Summit to Summit with Allan GW4VPX/P on the highest summit in South Wales, Pen-y-Fan.  We followed this with seven more contacts and went QRT after 20 minutes.