Shining Tor, Gun, The Wrekin and Walton Hill in a day

Midday on Saturday 13th July 2013 and I met up with Geoff M6PYG who disembarked from a train at Macclesfield Railway Station. I'd driven there from my home in Pickering for a few days activating Summits On The Air with Geoff. We were en-route to his place near Malvern, and in the Welsh Borders, but we activated four summits on the way down there. Our first stop was:

We parked across the road from the Cat & Fiddle Pub and walked up the 1.4 miles to the summit in 25 minutes. I've worked this summit from home so many times so it was interesting to see what it was like up there for myself. We made 16 contacts each on 2m FM with five watts and a simple vertical dipole fixed to an old fence post just down from the trig point, before making off back to the car for our onward journey to Gun, a summit near to Leek.

We arrived at the parking place for Gun which is at spot height 358 on the map and made our way up the moor to the summit. It was most pleasant and was easy to access. We stayed 30 minutes.


It was 3.30pm when we left the Gun parking place to head south. Our intention was to make for Walton Hill near Halesowen, south of Birmingham, however the traffic news on Radio 2 changed all that. With the M6 being blocked by an accident we decided to detour to a prominent hill we had both driven past many times - The Wrekin G/WB-010.

It was 5.25pm before we reached the parking place, partly due to the tailbacks of traffic caused by the RTA south of Stone.

I don't think we chose the best parking place but there is plenty of room in the lane which passes Wrekin Farm so we left my car there. The views are excellent from this summit which was scarred by a wide gravel track right to the top. Shame about that. We again used the VX-170 and dipole. There was a degree of de-sense from the transmitters nearby on the summit but we found that by changing channel we could eradicate the problem. 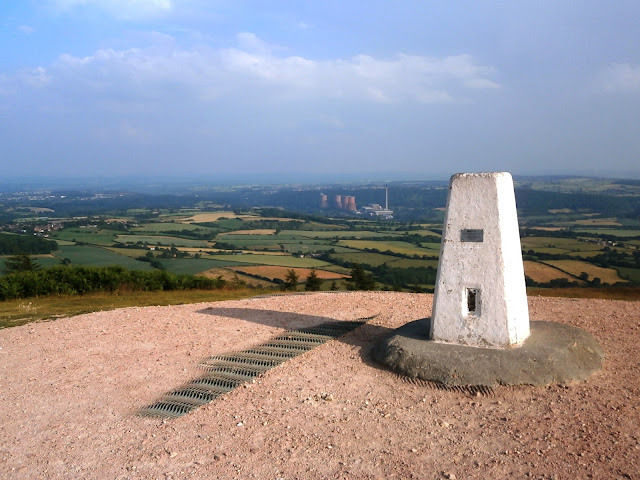 We'd spoken to another SOTA enthusiast earlier in the day when he was operating from Titterstone Clee Hill WB-004 and from Stiperstones WB-003. This was John M0JZH who lives close to The Wrekin in Telford and we made contact again with him again as he drove home. We subsequently met up with John at the bottom of the Wrekin for an eyeball, and to exchange stories, before proceeding on to our final summit of the day Walton Hill CE-002 where we again worked John back at home having had his dinner!

The M54 and M6/M5 were now free of congestion and this took us to the Clent Hills in just over an hour. It was only an eight minute walk from the car park at SO 943802 to the summit.

There were plenty of objects to fix our antenna to and we chose a rough hewn fence near the trig point. We stayed 35 minutes and had no difficulty completing 13 contacts on 2m FM with the extra power afforded by a Yaesu FT-857.

Arriving in Malvern later in the day due to the extra summit being added to our planned itinerary, we decided to purchase a chinese takeaway meal. I was delighted with my Special Fried Rice while Geoff tucked into his Sweet and Sour Chicken. We needed to fortify ourselves for our eight summit road trip the following day in the Welsh Borders.