SOTA in the Estremadura Region of Portugal - Day One

As a SOTA Chaser the area around Lisbon in Portugal attracted my attention. I had made contacts on HF with eight out of the ten summits in the CT/ES area from my home location, so when an opportunity came to take a 4 night break in Lisbon arose in January 2016, I flew out there to activate all ten summits over three days. 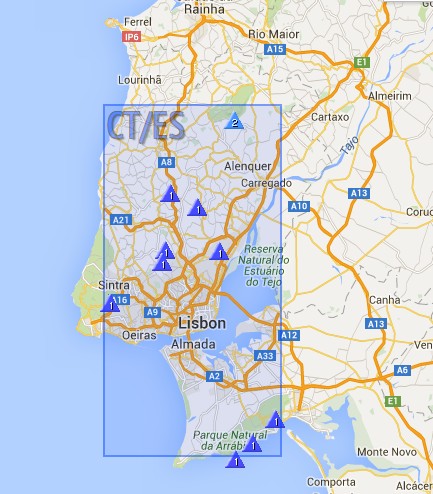 Day One - North of Lisbon

After arriving at my Lisbon Hotel the previous night in the dark I woke to a dry day. I breakfasted at 7.00 am and then fought my way through the traffic north of the city beyond the airport, to a parking place on a rough track in a col close to Monte Serves.

The summit with its obelisk like trig point was reached in less than 10 minutes from the car without problem. I made 15 contacts with European stations on the 10 and 14 MHz bands. My friend in Scarborough Roy, G4SSH was first into the log, as often happens...
After just 20 minutes using low power (FT-817 with 5 watts) there were no more callers so I packed up and returned to the car for my onward journey to CT/ES-001 Serra de Montejunto.  This was around 25 miles drive away. I was able to purchase some food and drink at a Lidl supermarket en-route to keep me going for the next three days....

At 666m above sea level (ASL) Serra do Montejunto is the highest summit in the Estremadura region and is worth two points for SOTA - all other summits in the area are worth one point.  The summit area is accessible by car. There is no winter bonus available as this only kicks in at 1000m ASL.

After leaving the A8 motorway (tolls payable at the booth on exit or later by credit card if you have a transponder fitted in the car, as I had) it was a most enjoyable drive through the countryside. I set the TomTom to Praganca, the nearest town to the hill, and then continued up the hill from there to the enormous communications network of masts and radomes on the summit.  After a reconnoitre of the whole area (which is administered by the Portuguese Air Force) I parked near to the large chapel and walked up the hill to the smaller chapel adjacent to the remains of a ruined convent. There was a seat here and this is where I set up my station for a comfortable activation over the lunchtime period.  The winter sunshine and 15c temperature were most welcome...


The contact rate was good from the summit as was the propagation and I able to reach AC1Z (CW) and N1GB (SSB) in the USA and 37 other europeans stations before I departed for the long drive to Sintra and the nearby summit of CT/ES-002 which was my last port of call on day one of my tour. 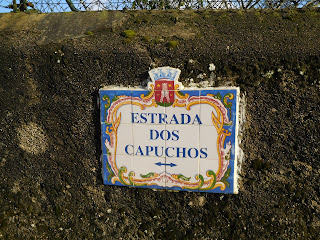 It took me well over an hour to reach the tourist trap of Sintra and then I found myself stuck in the middle of the afternoon on a hilly and narrow lane - part of an extended one way system. Unfortunately I was on the wrong side of the hill I intended to climb... After pulling over I realised after studying the map that I wasn't all that far from the summit of ES-002 Serra de Sintra after all, so I pulled over on to side of the Estrada Dos Capuchos and set off walking this route: 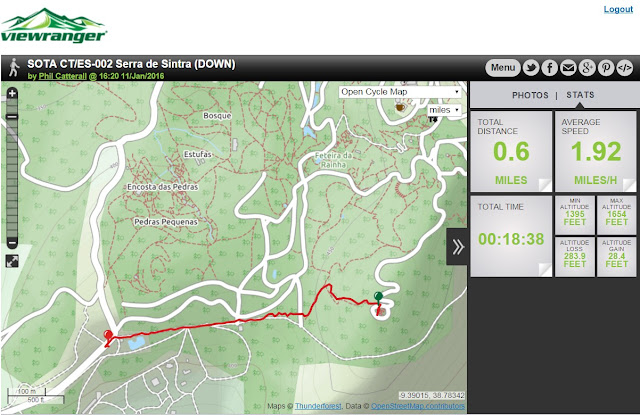 The Royal Park near Sintra is a tourist trap and I was able to avoid all of the people until I reached the summit using this route. The short route was interesting - a rough track and then a landscaped cobbled footpath. It was obvious that work was going on deforesting parts of the park which had become overgrown: 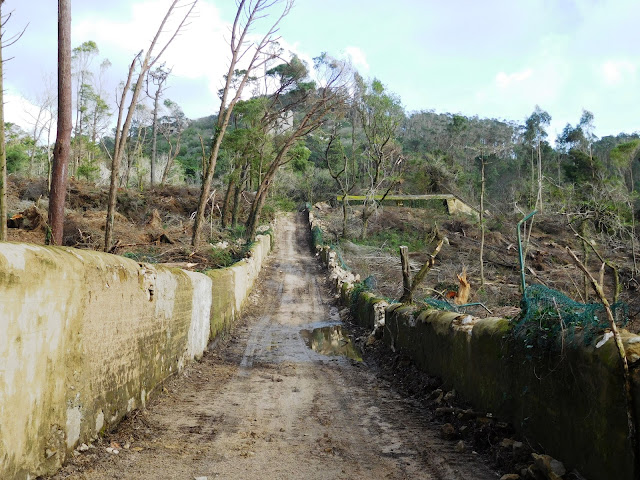 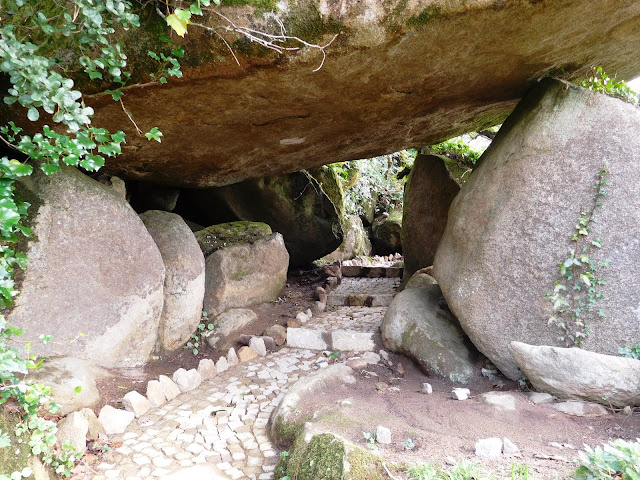 A large stone plaited cross was mounted on the summit near to where I set up my SOTA station. There were many visitors of various nationalities during my activation and I gave a demonstration of sending Morse Code to several people. I also attempted to explain how SOTA fitted into the hobby of amateur radio, pointing out that what I was doing wasn't citizen's band radio! 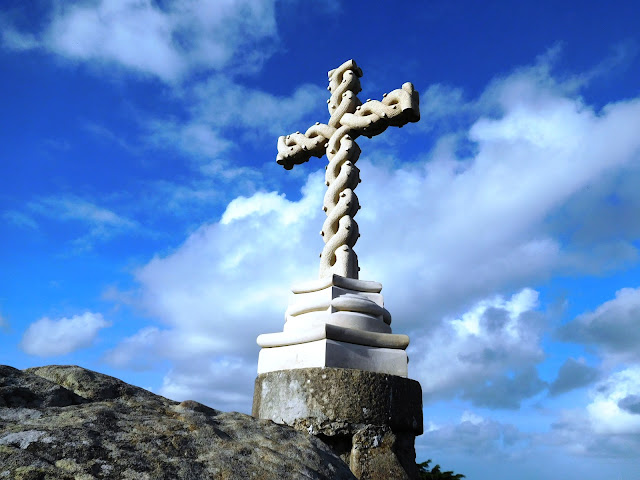 I had an appointment with local hams in LIsbon at 18.30 so after 18 contacts on the 20m band I closed down the station.

The evening meeting was most enjoyable, with David CT1DRB (fellow activator next day), Pedro CT1DBS/CU3HF and Joao CT7ABE attending. We met outside my hotel, with the locals having travelled into the city via the metro. The guys took me to a small restaurant down the street where we had a meal and some beers:

This was an opportunity to talk about SOTA, the equipment we use, low power operation, the antennae and batteries etc. I made arrangements to meet up with David CT1DRB the next day on CT/ES-004 and activate together on three of the four summit activations on day two of my tour.
Posted by Phil G4OBK at 23:59