From my digs in Creetown I drove for an hour to reach a good parking place for activating Grey Hill GM/SS-256. It was an enjoyable early morning drive via Newton Stewart and then north on the A714 via Barrhill. There must have been over 20 Wind Farm installation staff in their oncoming vehicles going to work on the latest project in the area, and they weren't hanging around... I parked on the backroad between Pinmore and Lendalfoot near Knocklaugh Farm and walked down the hill to start my walk. A field gate 100m off the lane takes you on to open fell and there was just one wall to climb to reach the summit.
The view from the top towards Ailsa Craig GM/SS-246 took me back to the memorable trip organised by Jimmy M0MGY and his Dad Tom M1EYP in August 2009: 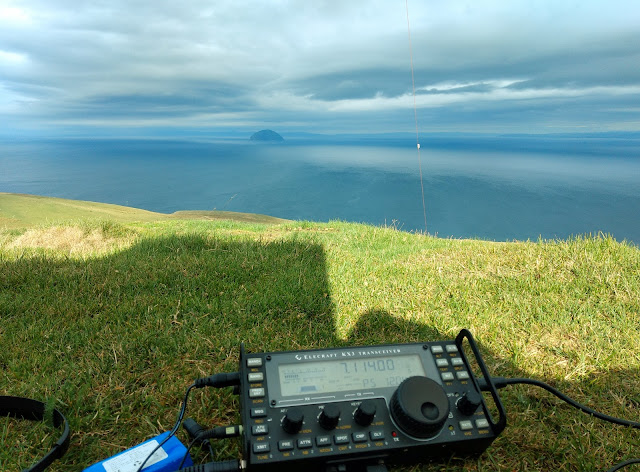 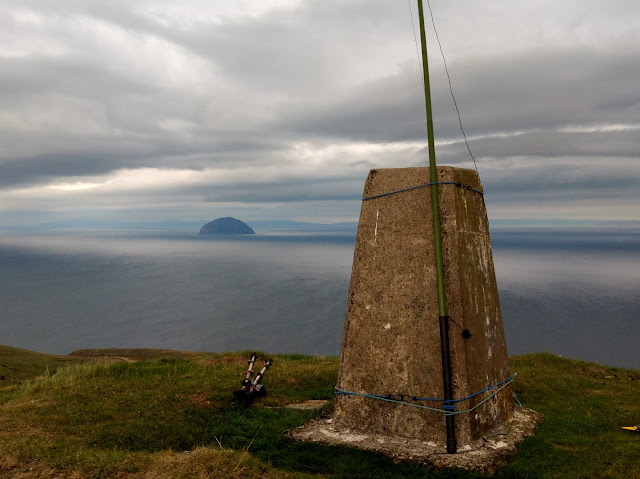 I pegged out my link dipole for 60m-20m into the strong wind, which was coming from the south. It's quite surprising when the land falls away like it does on both sides of Grey Hill and the dipole ends fall close to the ground on a 5m pole, how well you can progagate a signal on HF - my best DX with 10 watts CW on 20m was Indonesia, with a contact with YC2VOC - operator Galih who penned me this message after our QSO, very nice:

I started operating on 60m at 0822z. My friend Victor GI4ONL was waiting for me on 5354 KHZ CW. I finished at 0907z on 20m CW with another good friend, IK2LEY Fabio (I always think of ILKLEY whenever I hear Fabio's call - a town in West Yorkshire!).  There were a nice handful of S2S contacts including Armin EA/DL6GCA/P on his holiday in the Navarra region in the Basque area of Northern Spain. 40m SSB was dissapointing with only one QSO with GM7NZI Ray, who lives near Glasgow, then there were unanswered CQ calls on a clear frequency. Yet minutes before I had scored 11 contacts on CW on the same band.
It was time to move on so the DXer headed back down the hill after 34 QSOs.  There were two more activations planned for later in the day some distance away from this one so I had to get going... 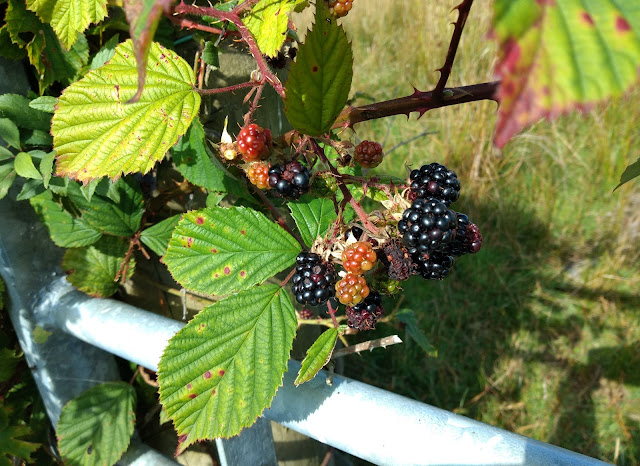 At the gate near the road I feasted on a few ripened blackberries before getting back into the car and driving north to Largs for my next summit.
Posted by Phil G4OBK at 22:00