My experiences with Weather Stations from 2009-2021

I've been running amateur weather stations at the two homes I have lived in at Pickering North Yorkshire, for more than ten years. Since I started with the first cheap Watson unit the technology and web content which can be viewed via the internet by the general public, has changed considerably. After spending more than £500 on five stations in the low to mid budget category over the years, it seems that the stations susceptibility to the very thing they are measuring, the weather itself, is their "achilles heel" of the outdoor sensors. So I thought I would catalogue my experiences of the different units I have used over the years in my blog...
My first weather station was made by Watson and cost less than £100. This Watson station which came as a christmas present, cost less than £100, and the unit has long been discontinued.  The Watson lasted less than three years before there were problems with two of the outdoor sensor units, so I decided to replace the whole thing. Over the next six years I ran two identical WMR88 weather stations made by Oregon Scientific: 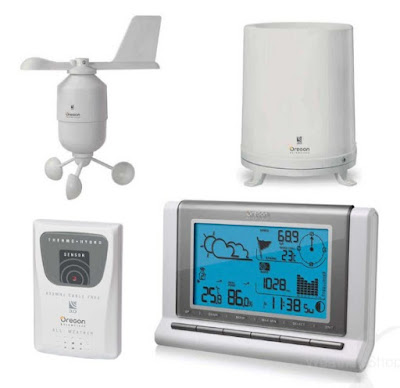 I had problems with the first control panel after around three years, so I purchased another WMR88 set as the cost of that was close to the cost of a new panel. The seperate spare sensors for wind, temperature and rain later came in handy to replace the first set when they became unreliable. After six years operation I still had a servicable weather station from the two I originally bought, so I took it out of service, repacked it and sold it in 2020 as a servicable station for £80 on eBay.
These early stations relied on software running on my own PC. I configured them to upload data to my own website and to the the public website Weather Underground.  This was achieved using the original Cumulus software which was written by a guy on Sanday in the Orkneys.  This software writer has now retired but an updated  version called Cumulus MX is available from another writer. If you try the updated version yourself - good luck, I could never get it to run on a Windows 10 PC.
In 2020 three of of us, all radio amateurs, decided to all purchase identical stations from a company called Youshiko that is trading in the UK now, selling weather stations and other items, such as radio clocks and battery chargers. The company is based in Romford Kent. We all decided to purchase their top of the range "professional" unit the Youshiko YC9391 at a cost then of £299.  The YC9391 has a 7in1 unit with all sensors contained within the roof mounted outdoor unit, which in my case was mounted on on a 30mm diameter pole on my house roof:
The only external sensor to the main external unit was the indoor thermometer which was seperate to the control panel. There was no internal thermometer within the panel itself: 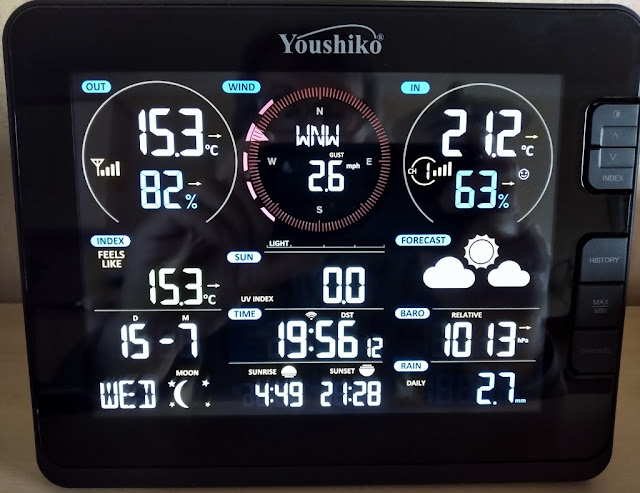 With technology and internet connectivity of devices continuing at great pace over the last decade, these latest amateur weather stations operate in a different way to the earlier models I had which relied on a home PC 24/7 to perform the upload function every few minutes using software on a PC. The latest units such as this Youshiko and others by Bresser, National Geographic, Explore Scientific and other branded similar stations, utilise the users own WiFi router to upload weather data to the internet directly, so no longer does the user have to rely on connecting their panel to a PC to upload their data to the internet. The panel communicates directly to the router and the router then sends the data every few minutes to one or more publically viewable websites.
Unfortunately it appears that the three of us were unlucky in purchasing the YC9391 unit, and only one out of the three of us are still using these. Within four months of installation one of my friends 7in1 units stopped functioning completely. The support provided by the Weather Shop where he purchased it was excellent. They told my friend that the units had been unreliable and that they weren't able to repair the unit. They also told him that they had stopped retailing the Youshiko YC9391 on account of its unreliability. He was asked to return the YC9391 to them. To their credit they supplied, at no cost, a similarly priced Davis unit. My other friend was also unlucky with his unit which stopped working after around 4 months - in his case he like me, had purchased direct from Youshiko, who replaced the 7in1 unit. Six months later I'm able to report that the second replacement unit is providing reliable service.
In my case problems with the 7in1 unit developed after 5 months when the UV sensor stopped working. Up to this point the unit had been reliable. At the same time as the UV sensor failed to read, the 3 x AA batteries in the 7in1 unit expired and these were replaced by lithium ones. These lasted just three weeks, so that meant another climb on the roof to replace them! This lithium set lasted less than two weeks so once again it was necessary to climb on the roof and replace the batteries again. This time Duracell Ultra AA were fitted, and yes, you guessed it - these lasted just three weeks!
So after an awkward and protracted email discussion with the man at Youshiko about my faulty unit with no offer of replacement I lodged a Section 75 claim through my credit card company against the company. After five weeks Youshiko offered to refund my money and provided a forwarding address. The unit was returned to them boxed with all the original documentation. With the £299 back in my account I had now to decide to buy a replacement, my 5th weather station in twelve years.... so what did I buy? I got the National Geographic WIFI Weather Center 7in1 from Bresser UK costing £189 and I will write up a review in my next blog entry. Happy weather watching folks...
Posted by Phil G4OBK at 14:02