The summit is also known as Cairnsmore by some - but as we also have Cairnsmore of Fleet (GM/SS-065) eight miles away, I'll stick with the alternative name for the summit of Black Craig of Dee. My advice for this summit is stay away unless you have to. As a SOTA Completist I felt I had to go there - but there were other summits in the area offering more points that would have been much easier to reach than this meagre one pointer. My choice of route was bad for sure - I wish now that I had noticed the route notes of Gerald G4OIG on the SOTA website before I went there rather than after... In 2007 Gerald wrote that he used a parking place on the Raiders Road beyond The Labyrinth and walked from there, rather than using a bike as I did, from the Clatteringshaws Reservoir Visitor Centre. Here is my route:

The 3 mile route took me almost 3 hours to negotiate, despite using my bike for the first mile! Here I am on the car park (£3 for the full day) preparing to set off at 10:20am on the Sunday of the G/LD weekend, in the hope that from GM/SS-170 I would work some of the Lakeland stations across the Solway Firth, which was 23 miles south of my summit: 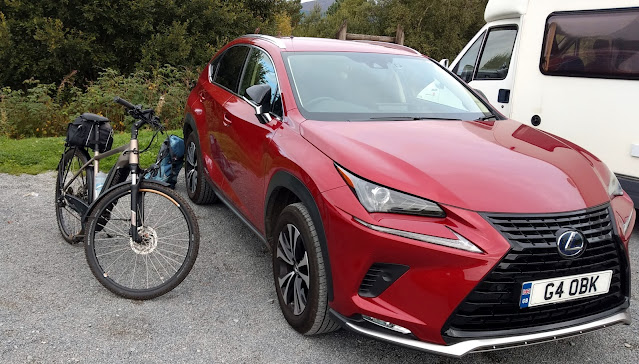 My plan was to ride to the Rocks of Laggan (see map above) lock my bike there and cross the Nick of Benniguinea to reach the summit via a wide ridge. I chose a bad route for the bike section though and should have continued on the graded track to the hairpin at NX 565766. I could then have ridden up to the Rocks of Laggan no problem. The rocks are just below the radio mast on Benniguinea. However, I turned right at NX 559764 and went south - thinking the track was a goer on the bike. At around NX 561760 the track became an unrideable path, so after pushing the heavy e-bike uphill for a few hundred metres it was ditched amongst the bilberries and locked up:
It was 10:44am when I rejoined the graded track at NX 563761. I walked the rest of the way to the summit, reaching the top at 13:10pm!  It wasn't so much a walk as a stagger - stop - rest - stagger - fall over - stop - rest - stagger - fall over. It took me almost two and half hours to stagger the two miles to the trig point due to the horrible terrain. Coming back was a little easier, but not much, and I never saw a soul all day. The ground was almost pathless after leaving the track near Benniguinea, amongst tussocks, bilberries, bracken and marsh grass. I've activated the majority of summits in Dumfries and Galloway region but this was undoubtedly the hardest for me, although my level of stamina and overall health is now diminished from what it was a few years ago.
The trig point had the theodolite fitting cap removed so the hole provided an orifice for my 5m pole fitted with 2m vertical dipole. I was carrying a "pocket rocket" - the old Yaesu FT-1500m 2m FM radio with a 4.2 Amp LiFePo battery, which I flattened whilst running 50 watts over the 50 minutes I was on the air, making 21 contacts. The log contained only four G/LD activators though, which was a little dissapointing. Using the higher power meant I was able to work M0NOM/P, M0JKS/P G4OOE/P and G3TQQ/P in the southern part of the G/LD area. The best DX contacts were another Mark - G1PIE who lives between Chorley and Preston, an area I know well. Then John GW4ZPL came in, who lives near Anglesey. Mark M0NOM/P was on Whitbarrow Scar, who was not as strong as the other G/LD stations. Hardly suprising when you look at the path profile, 78 miles is not exceptional - but the path goes straight through the large lump of Great Gable G/LD-005:

I was hoping to go to nearby GM/SS-181, Fell of Fleet by late afternoon, however as it was 14:45pm when I left the summit the alert was deleted and I took the re-ascent over Benniguinea at a slow pace, lying down from time to time amongst the sweet and tasty bilberries.
After collecting my bike and enjoying the one mile ride down in just a few minutes, I reached the car at 16:53pm before heading to my accommodation in Creetown, where I was able to cook myself a meal and enjoy an Amstel lager, purchased from the nearby convenience store - open until 8.00pm on Sundays.
Analysing my day I questioned my reasoning to continue SOTA activating after such a gruelling day, with over 200 miles of driving, the cycling and the gruelling walk. Fortunately the next day, when I ventured north, was much more enjoyable and productive and this restored my interest in continuing with what is three hobbies combined into one in what we all call SOTA.
Posted by Phil G4OBK at 23:59