Its now 1.00 local time and after an 18 mile drive from Ruardean Hill we have arrived at the parking area for Garway Hill, grid ref SO 444248. This is at the end of a white road which is shown as Mount Pleasant on the map. The road is accessible without problem in a normal car. A 12 minute walk and we are on the summit. On the way up we passed a pond on our right which was full of horses and ponies drinking: 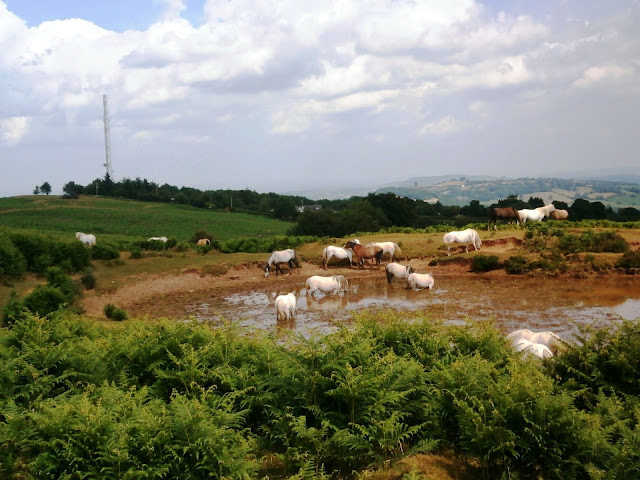 The trig and the remains of a World War Two radar unit soon presented itself at the summit and we set up the gear. 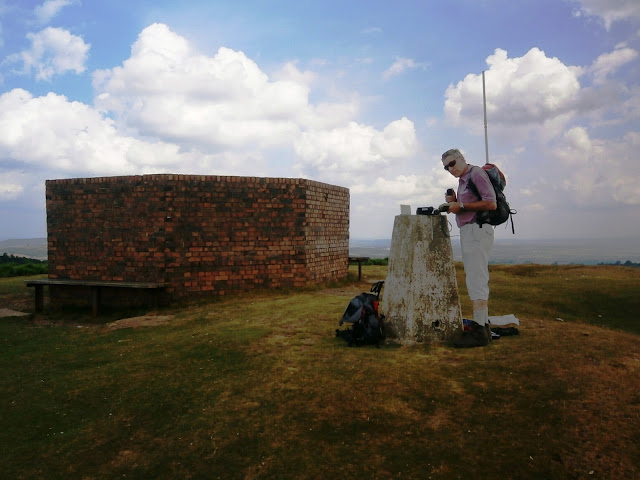 On the summit were two other "hobbyists". The guys were flying radio controlled gliders and we had a chat with them about ham radio, propagation and LiPO batteries. One of the guys knew a lot about radio propagation - he'd been a short wave listener in the 1980s.

We left the summit after 40 minutes.

A 22 mile drive from Garway Hill found us parked up on a grass verge alongside the B4230 at Shoals Bank, grid ref SO 389494. This was the start of the 20 minute climb up the track (a private road) to the heavily wooded summit of Burton Hill. 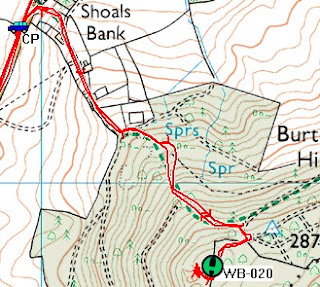 We decided to locate the highest point of the hill which was in thick woodland WSW of the trig point.  I think this was probably a mistake, we should have gone left to the trig. We set up in the wood instead and found it difficult to both hear stations and propagate a signal. Towards the end of our 20 minute activity period we were called by G6UYG/P on Long Mynd G/WB-005. After that highlight we headed back down the hill to the car (15 mins). This is unlikely to be a summit I will return to.

A further 20 mile drive took us to our final roadside activation of Hegdon Hill. Geoff parked the car on the verge and we set up the station through a gate at the side of the bridleway leading to Little Hegdon.

An unremarkable activation (never to be revisited) but we made eight contacts and bagged another unique Marilyn for the SOTA tables. 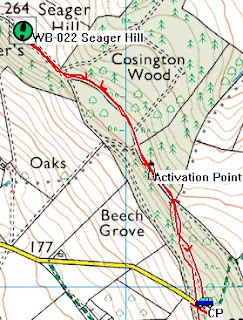 A 16 mile drive took us to our last one of the day, 7 miles east of Hereford. We parked by a locked gate at SO 622379 and walked for one mile uphill in our determination to reach the actual summit at the trig point. After we went through a gate it became very overgrown but we ploughed on through the brambles and nettles until we could see the trig point the other side of hedge about 10m away from where we stood.

We shouldn't have bothered going further than we needed to as it was so overgrown, so we returned down the track to a place we had spied on our way up at SO 6206 3832 where we had an open view where the trees had felled. This was at 250m ASL so we were well within the activation zone.  A 10 minute session produced five QSOs. We were happy with that so we went QRT and headed down to the car (5 mins) and back to Geoff's QTH near Malvern. If you visit Seager Hill then I advise against going as far as the trig point, at least during the summer. when the undergrowth is so thick.

We returned to the M6PYG QTH near Malvern to enjoy a BBQ.

It came as quite a surprise that Geoff still had the energy to cook after all the driving, and we enjoyed a bottle of wine to finish off a satisfying day on the SOTA road, whilst we discussed our plans for the following day when we intended activating two more summits in the Welsh Borders region on my way back home to North Yorkshire.

Overview of the day:

8.1 miles walked
1550 feet climbed over 8 summits (3 "drive on summits")
Each operator completed 58 contacts on 2m FM
162 miles driven in a clockwise rotation from Cradley near Malvern

Link to Welsh Borders Road Trip (Part One)
Posted by Phil G4OBK at 11:53