I was really fortunate yesterday in many ways in my effort to go SOTA Cycling in Scotland - I activated 4 unique / complete summits but only needed to cycle to one of them! 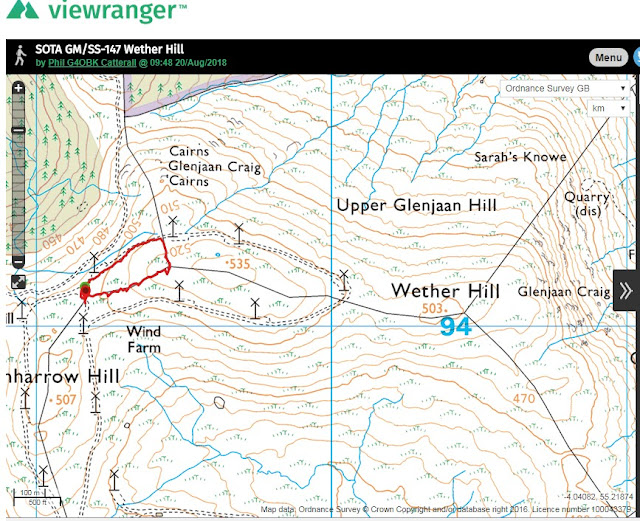 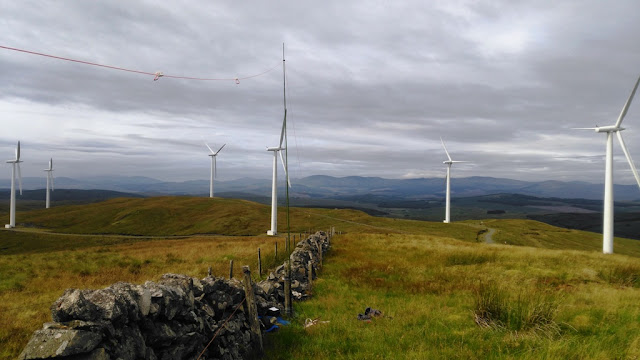 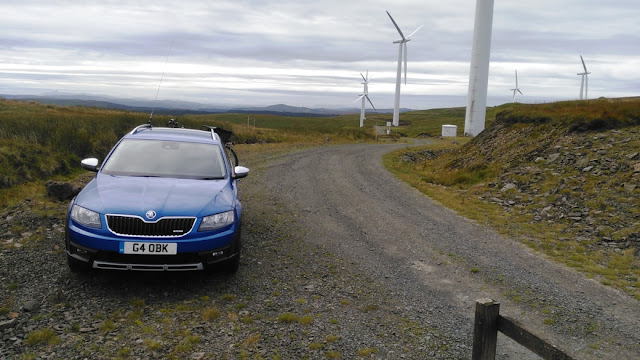 I got to the gate from the B729 at NS 684912 which leads up to the wind farm on SS-147 Wether Hill - a workman opened the gate for me and waved me through... I took that to be the granting of permission, so I drove smartly through with a wave and this saved me cycling to the top. I parked near to the summit and walked a half mile from the car rather than cycling up the hill.   2 points, a SOTA Complete and 20 QSOs including Derek 2E0MIX in Cumbria on 2m FM with my handheld and RH770 whip.  I took some pleasure out of working my friend Jan OK2PDT operating as DL/OK2PDT/P on DM/BW-008. The short skip propagation conditions for inter UK communications were poor - the stronger stations were south of Bristol - the likes of G4WSB, GW4VPX and G0RQL were logged. On leaving the site the man came out of his cabin again and opened the gate for me - the workmen had been regrading the road up to the wind farm but their machines were resting. I complemented him on how good the work on the road was, and he thanked me in return... 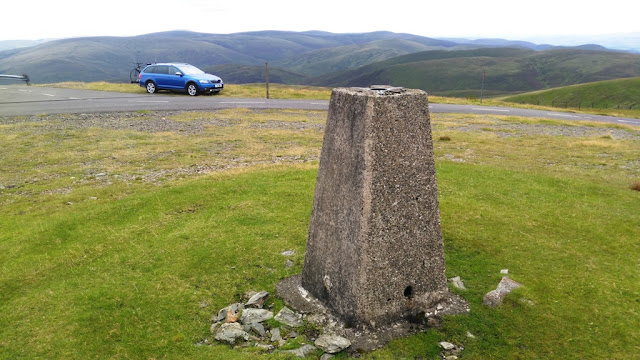 The radar station on Green Lowther near Wanlockhead was next. I went there some years ago with Geoff M0PYG one late afternoon and the security gate was locked. Yesterday the gate was open, which was an invitation for me to drive to the summit. I saw two contractors vans up there and a cyclist and drove to within 100m of the trig point where I set up the KX2 and link dipole on my 5m fishing pole. No problem and no questions asked, even though a contractor went to the nearby transmitter building. 16 QSOs were completed including another with Derek on 2m, which is when I discovered that the “fully charged” battery on my FT-270 was worn out and needs replacement. We did complete the contact but my radio was cutting out due to the worn battery at the end of our QSO - I was using 5 watts output with the RH770 whip antenna. Jan DL/OK2PDT/P came on again, this time from DM/BW-003 and we made our 2nd and final S2S contact of the day.

Another wind farm and no closed gates. I drove almost to the top - total walk to the trig was around 300m. 11 QSOs on 40m CW/SSB from this summit, and I was finished by 1300z. 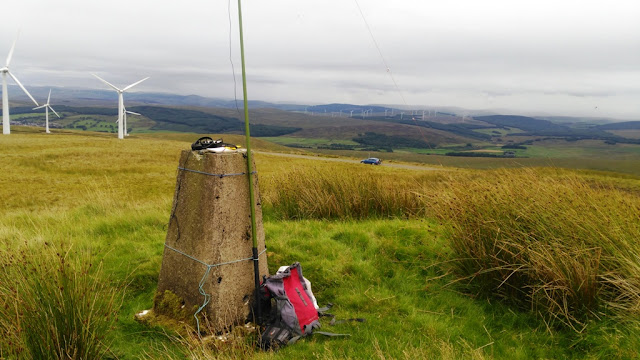 However, this was supposed to be a SOTA Cycling day and it hadn’t been. I felt like a cheat having walked less than one mile bagging three SOTA Unique Completes.  I had some time left before heading back south and home so I studied several summit locations using Viewranger on my phone and on the local OS 1:50000 map I had with me. I opted for a nearby summit called Nutberry Hill SS-156 not far from SS-174.

I saw on the map there was a track leading into the forest - the nearest village was an old mining community I had never heard of named Coalburn. From there I drove beyond a derelict farm called South Cumberhead until I reached a locked gate at NS 777337 where there was just room to park my car off the track. This parking place left me with a 5 mile journey to the summit, mostly on the bike with the last half mile from a quarry being a moorland walk.  It was 3.30pm when I set off on the 10 mile round trip - it would have been too late to walk it and get back home before midnight, but it was feasible on the bike. It wasn’t the best surface for SOTA Cycling and there was a significant amount of ascent, descent and then re-ascent, but I managed to ride 4 miles out of the 4.5 miles, pushing the bike for a half mile, before leaving it and walking the final half mile over the wet moor. If I had taken the time to plan this route at home I would likely have decided it was not worth it. 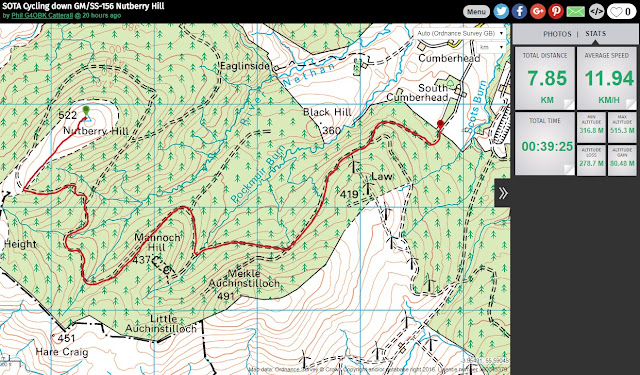 In the event, it took me 70 minutes to reach the trig point after the 5 miles of cycling and walking and when I got there it was raining. This was that wetting, misty drizzle that soaks you in time at all. I operated my KX2 on CW in a small pack bag which I use to carry my headset in. After just six 40m contacts (including Victor GI4ONL) there were no more callers and I packed up. 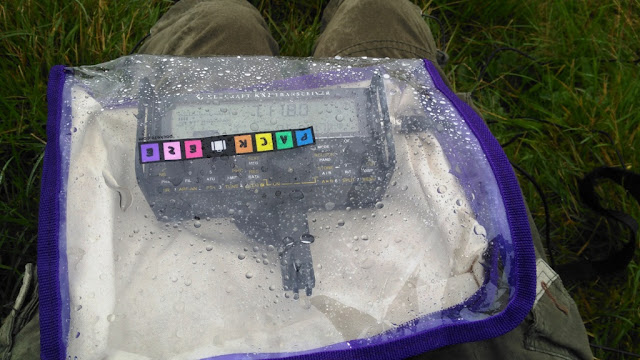 The walk and ride back I was not looking forward to, however I actually enjoyed it, reaching a maximum speed of over 27 mph on the downhill rough surface without falling off the bike! I was wearing my helmet as a precaution..... The journey time back, including the half mile walk to the bike took me 47 minutes for the five miles. I got back to the car at 5.54pm and promptly changed my sweaty T shirt and socks which were soaked. I was cycling and walking in my leather walking shoes rather than the usual Scarpa leather boots and the boggy moor meant I had returned with wet feet. This did at least remove some of the hard skin which I suffer from on my feet!

This left me with a 200 mile drive back to Pickering, which included a stop at KFC Penrith for the usual feed. The A1 was closed so I purposely diverted early from the A66 via Richmond onto minor roads and then on to Brompton on Swale and Northallerton to Thirsk. The detour cost me another half hour and I reached home in Pickering at 10.40pm having driven 458 miles.
Posted by Phil G4OBK at 14:25