Here we are at last - resuming our amble at our own pace on Wainwright's Pennine Journey....over two years since we first started the 247 mile walk!


Once again we parked two vehicles at Appleby Railway Station for several days, leaving there at 1.30pm for a short walk to the Sandford Arms, a country inn in the village of the same name just off the A66 where we would spend our first night. The other hostelries which we had pre-booked were at The Nateby Inn and The Moorcock Inn at Garsdale, from where we would walk the following day into Sedbergh (at least some of us would - more on that later!).  We had also left one car at Sedbergh, where Yvonne and Chas have a caravan, and one car at The Moorcock Inn, Garsdale. Vehicles which were strategically placed to assist us at the end of this four day section.

We followed the valley along the River Eden for the next two days right up to the watershed in Mallerstang when we met the River Ure. Unlike on the last section of the PJ (as we have become to know it) I was not monitoring the conditions of the route or the waymarking, which on this section was looking complete. The work had already been covered by another volunteer. This fingerpost at Great Ormeside displays the attractive Pennine Journey Waymarker:

As we neared Sandford late afternoon we were confronted by an unusual blockage of the public right of way. A barrier using a JCB and its buckets had been placed across the bridleway. This was temporary and was being used as a means to keep cattle in a specific part of the yard! We managed to negotiate it without problem.

At Sandford bridge we left the route to head up to the village to the pub where we stayed the night. We had enjoyed lovely hot weather on our walk from Appleby and it was set to continue for the rest of the week.

Our route continued to follow the River Eden through to top of the Mallerstang Valley. As we headed towards Brough where we were hoping to buy our lunch, we could see Nine Standards Rigg and Wild Boar Fell to our right. This was another hot day and we took our time on the paths, tracks and byways, skirting the village of Warcop and passing through Little Musgrave on our way to Brough.


Brough Castle came into view and we were pleased to see it had its own tearoom - Brough Castle Farm, something we were not aware off. This saved us having to deviate from our Pennine Journey route - we thought we may have needed to cross the A66 to find a cafe.

The lady in the cafe thought it odd when we said it was a six mile walk to Kirkby. She said it was only 4 miles but failed to grasp that we were taking the scenic route via the villages of Kaber and Winton to Frank's Bridge in Kirkby Stephen.

The route then led us across the town cricket pitch (there was a match taking place) and then on to Nateby on a well maintained bridleway. The bridleway forms part of a poetry path here. Twelve short poems were written by the local poet Meg Peacocke and these have been carved on to blocks of stone by artist Pip Hall. You can find more details here.

My navigation went a little off south of Hartley Castle and we somehow found ourselves in a small wood having left the bridleway. We wasted around 10 minutes, but by retracing our footsteps we found we had gone wrong by not climbing a ladder stile. After crossing the former railway line we reached Nateby for a refreshing drink served by Hannah who warmly welcomed us to tThe Nateby Inn. She was in charge as the landlady who is called Gaynor, was away for the day with her family at Alton Towers. We met her the following morning when she served us breakfast, when she recalled a recent visit by David Pitt the Author of the guide book, so she knew all about Wainwright's Pennine Journey.

We enjoyed staying at The Nateby Inn, the food was good. A tearoom for walkers and cyclists has been created at the rear of the pub and this doubles as the breakfast room. The bedrooms were quite small but adequate for a one or two night stay. The pub was formerly known as The Black Bull but Gaynor told us that changing the name gave the pub more of an identity.

Having driven down the Mallerstang valley many times on the B6259 since I took moved to Yorkshire in 1993 I was really looking forward to actually walking through it on our way to The Moorcock Inn at Garsdale Head. For Jennie and me the boots we were wearing were named after where we were walking - Altberg Mallerstangs!

Enjoyable it was to walk, in the company of my wife Judy and friends, on a lovely hot summer's day. But not everyone in the group found it so comfortable as we made our way up the valley....

Just as we were about to leave the Inn the voice of our friend Nick Langmead (Callsign G4OOE) came crackling through on our VHF radio (Geoff and I are radio hams). We both called Nick and made contact - he was on Cross Fell and was later heading for Nine Standards Rigg.

From The Nateby Inn we followed a bridleway through to Croop House on the west side of the Eden. From here we used a BOAT (Byway Open to All Traffic) which took us to a C Class road near the remains of Pendragon Castle. Cumbria County Council maintain this byway and on the day of our visit were busy installing a new cattle grid where the byway joins the tarmac road at grid ref NY 779030:

Continuing on we reached The Thrang, crossing over the B6259 to join another BOAT which is in fact the old road which we followed for 5.5 miles across the side of the fells. This is known as The High Way and it also forms part of the long distance walk called Lady Anne's Way.
We'd read about the Eden Benchmarks. These are a series of sculptures marking out the path of the Eden. We knew there was one such sculpture on the High Way called The Water Cut and decided that this would make a good target to aim for to have our lunch. We arrived there at 1.00pm for a half hour stop.
Continuing on we reached the derelict farm buildings at High Dyke just after 2.30pm. From here we descended to Blades and having crossed the watershed leaving the Eden behind, encountered the River Ure. From here it was a short walk to the Moorcock Inn where we stayed overnight.
The pub was very comfortable with large settee's. Food wise large portions were the order of the day, and the rooms were very fairly priced. Jennie and I chose from the Tapas menu and we ordered far too much, whilst Geoff stuck to one of his favourites, Steak and Ale Pie.

This was our last day and it was hotter than ever as we left the Moorcock at 9.45am. After crossing the railway we crossed South Lunds Pasture. Due to the heat most of us were wearing shorts and we managed to negotiate the nettle beds we were warned about in David Pitt's guidebook without too much difficulty. What followed was a most remote section of the walk - a five mile stretch of moorland before we reached Uldale House.

Continuing on we reached the A683 Sedbergh to Kirkby Stephen road. The heat of the day was really getting to us now and the climb up to Murthwaite was a grueller. Jennie was starting to feel quite ill at this point but she soldiered on via what is an excellent bridleway to reach the Cross Keys Temperance Pub at ten to three. On account of how she felt it was wise for her to leave the walk at this point, so Jennie, Yvonne and Chas opted to catch the next service bus back to Sedbergh and to walk that final section on another day.

We all had plenty to drink at the Cross Keys at Cautley, some of us enjoying a few glasses of 'Owd Oldham's Sarsaparilla, produced by the Mawson family of Oldham. Geoff (who hails from Oldham) recalled visiting the shop in his youth where this drink was made and sold. The drink comes as a cordial, and here is Geoff negotiating the purchase of a bottle from the proprietor of The Cross Keys: 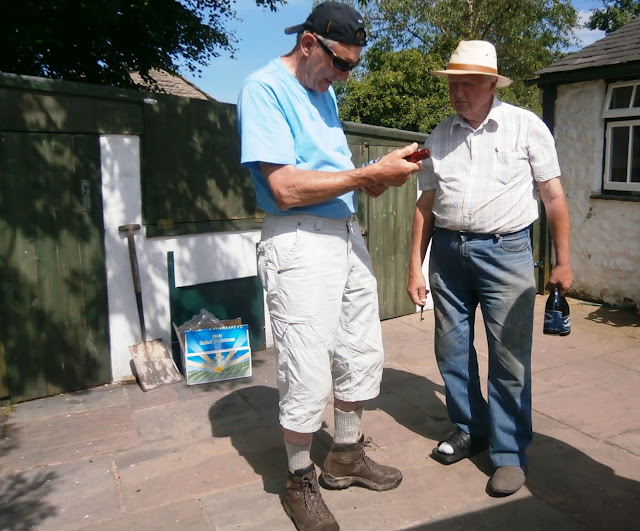 The three of us then set off to cover the four miles or so back to Sedbergh on the path and track above the River Rawthey. We met up with the others at their caravan just after 5.00pm. Jennie was feeling much better and was able to drive herself back home to York. She returned in August to The Cross Keys at Cautley to thank the staff for their hospitality on the day we passed through, and whilst there, walked the section of the Pennine Journey into Sedbergh which she had omitted.

We intend completing the walk from Sedbergh to Settle sometime in September.
Posted by Phil G4OBK at 23:59