I hadn't been to Wales to activate for SOTA since summer 2017 so when the chance to return came in mid January 2018 I took it. I stayed overnight at the QTH of my friend Geoff M0PYG, who lives near Malvern. We planned to activate four summits in Wales over two days. On the second day we had dry weather throughout the morning after expecting forecasted rain, so the extended dry spell enabled us to activate a fifth summit before I returned home to North Yorkshire and Geoff headed back home to Malvern...

1. GW/MW-006 Pegwn Mawr
Driving in convoy as two cars, we left Cradley near Malvern in fog at 0620z. On the journey to Rhayader the temperature fell to -5c. There is a convenience store with toilets at Crossgates on the A44 and we made good use of it. We left Rhayader via the B4518 which took on a motorised climb to the entrance to Pegwn Mawr Wind Farm in Powys, just beyond the farm called Cloesffynnon. We parked on the side of the track below the 2nd gate at SO009809 and were walking by 0905z.
The ground was hard and frosty and now that we were above the bank of mist looking like cotton wool below us in the valleys, the temperature had risen to a comfortable 0c. It felt warmer than that in the sunshine. In passing we had hoped to speak to the farmer at Cloesffynnon out of courtesy, to let him know we were intending to park by the track above the gate leading out of his farmyard, however there was no one at the farm when we passed. In the event, we met him once we were walking. He came down the hill on his quad, returning from feeding his huge flock of sheep grazing among the wind turbines on the summit. He was very friendly so we had a chat before proceeding to the summit. He didn't object to us parking the car where we had, so long as it was off the main track. The way to the top is easy with no obstacles in the way and we reached the trig point in less than 30 minutes. Being above the mist we weren't banking on any tropospheric propagation using 2m FM...
In the event we were rewarded with 11 contacts on the 2m FM band whilst running a Yaesu FT-1500M at 40 watts output from a 4 amp LiFePo battery to a vertical dipole aerial at 4m AGL before returning to the car. I say car - for convenience we had left Geoff's car nearby in the Chapel Car Parking area at SO000801.

A large car park is provided by the B4518 near to the Llwyn Clywedog Reservoir. If it wasn't for today's mist we may have seen the reservoir....no chance. We set out from the car park SN821882 hoping that the mist would either burn off or that we would rise above it. Burn off it did not, all day, however we did rise above it to capture this lovely photo near the summit of Bryn y Fan with the reservoir below us in its shroud: 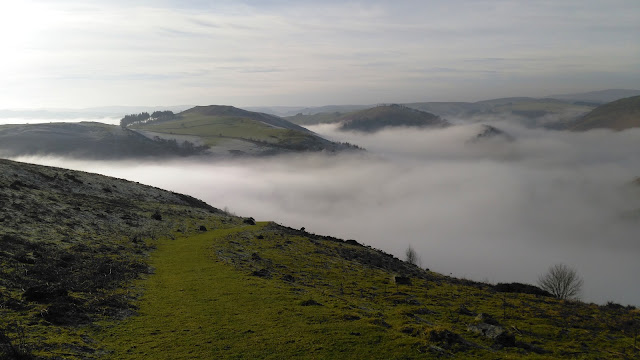 We took the shortest route up which involved climbing a low fence - I would recommend using our down route though and walk to the switchback, it was easier that way on the knees as well coming down. Our up/down tracks are shown here  - taken from my Viewranger account:

This was the only summit out of three today that did not house a wind farm. The trig point is located on a piece of moorland, typical of many others in the UK. Here is M0PYG posing for the camera by the side of it: 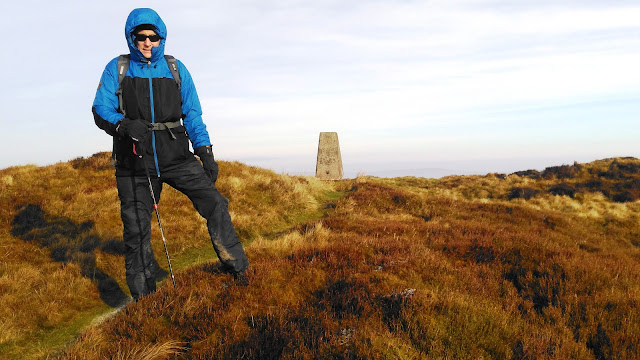 The 145 MHz coverage from MW-018 on 2m FM wasn't as bad as we feared, with the summit lying 100m lower and behind the earlier activated Pegwn Mawr ridge (MW-006) to the south east of Bryn y Fan. We logged nine stations in 15 minutes in England (mostly) and Wales before packing up to head off to our last summit of the day at the Carno Wind Farm which was five miles north of our current location. The same set up was used on this summit as was used on Pegwn Mawr.

A short drive now to the village of Carno where there was a convenience store and a most convenient place to park Geoff's Subaru. We went up the lane in my Skoda and parked at some buildings that supported the Carno Windfarm installation across the valley where the summit of Bryn Amlwg is located. This was our longest walk in of the three summits done today - a shade over two miles each way.  It was still cold enough for hats and gloves and there was no winter bonus available on this one either, but more importantly for me, this was my third SOTA Complete of the day.... 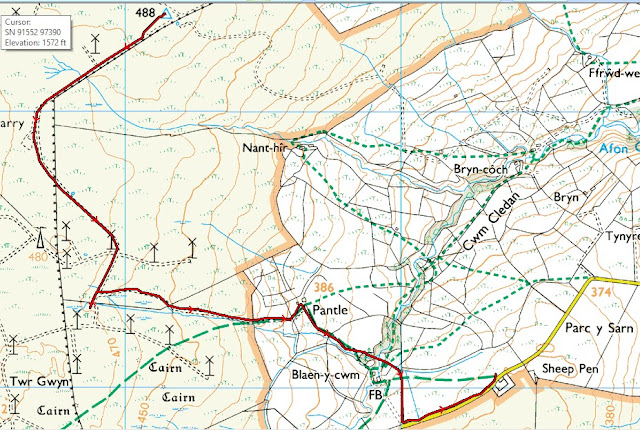 The bridleway going west from the buildings is over rough land and not worth trying. Better to continue to walk down the public road and turn right to head downhill past Blaen-y-cwm farm and over the bridge, and then continue the long way round on the graded service roads rather than be tempted into cutting across what is very rough terrain. The farm at Pantle is unoccupied and becoming derelict - the left side front of the roof has gone in. Shame that, as once the water gets into a stone building like that it soon gets completely wrecked.  This picture was taken on our return leg after the activation: 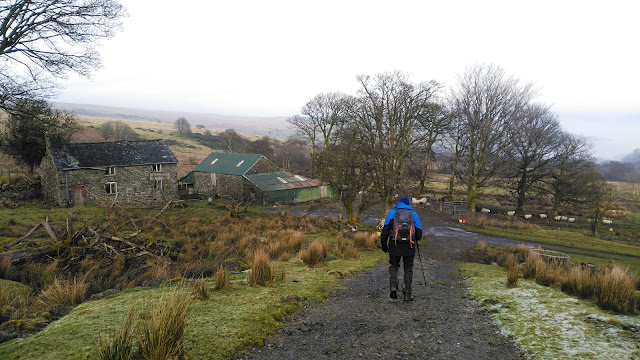 Continuing on the higher ground above Pantle the tracks took us to what appeared to me to be the back entrance gate to the wind farm. The gate lies just within the 25m drop activation zone. We continued on to the trig point and set up there. We never saw a soul, the same as on our previous summit Byn y fan. It was a Friday, so maybe Saturday would have been different....
So, onward then to the trig point amongst the sound of the turbines that were turning well in what was a light wind. As on the two previous summits today, we were carrying HF QRP equipment that would have been deployed had we needed to, but with the journey time to reach our first summit and the shortness of the January daylight hours, our endeavour was to work all comers on 2m, qualify the summit, and then move off to the next place. That way it was easily possible to complete three summits in the day and then finish off by arriving in daylight at a village pub for the night.  It worked out well for us on Bryn Amlwg and we made six QSOs in fifteen minutes and then it was time to pack up. Looking at the six stations worked for evidence of a QSO on all three summits, we just had Allan GW4VPX/M in the log on all three. Allan had been on some business in Mid Wales for most of the day and was in his car and in the right place for a QSO every time we landed on a summit. Nice one Allan!

The walk back to the car took 45 minutes. We drove to an interesting tearoom and museum at Llanbrynmair on the A470 for a brew of tea and some marvellous Welsh Cakes. We left there at closing time (1630) and followed the satnav via a ridiculously narrow country lane which led us to the village of Cemmaus and the Penrhos Arms, where we had a room reserved for the night. We'd seen on road signs that the nearest town was Machynlleth. We didn't pass through it but I'm fairly certain that I'll get there one day in my quest to activate all the summits in Wales. 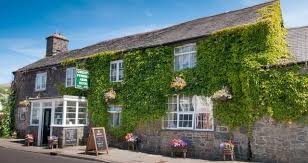 The Penrhos Arms at Cemmaes was average in more ways than one, the main gripe was that the shower mounting was broken and the water pressure extremely low. The staff were welcoming and friendly though, and that made up for what were minor issues. If you order Whitebait here as a starter what you get are small pieces of fish in breadcrumbs, not whitebait.  It still tasted good though after a day outside on the hills of Mid Wales....as did the enormous Celtic Burger and nice chips. I didn't finish the burger on account of over-indulging on the "Whitebait" of which there was enough for two servings. We had another part day to go tomorrow when we were to tip into the North Wales Association. I expect to be back activating in Mid-Wales in April when I am staying with eighteen other members of Ryedale Walking Group at the Elan Valley Lodge.
Posted by Phil G4OBK at 23:59