After our visit to the securely locked gate leading up to Green Lowther GM/SS-056 the previous evening, we decided to restructure our final day in Southern Scotland and attempt the activation of four one point summits on HF/VHF before returning to England.

We were parked up and setting out at 8.30am on the 35 minute walk to the top.

The barking dogs and flying guinea fowl at Kirkbride farm were no problem, thanks to a fairly new cattle grid which had been installed at the gate entrance to the farm.  We passed the remains of an old church covered in ivy - there was little of the church remaining, but the cemetery was substantial and was obviously being maintained to some extent: 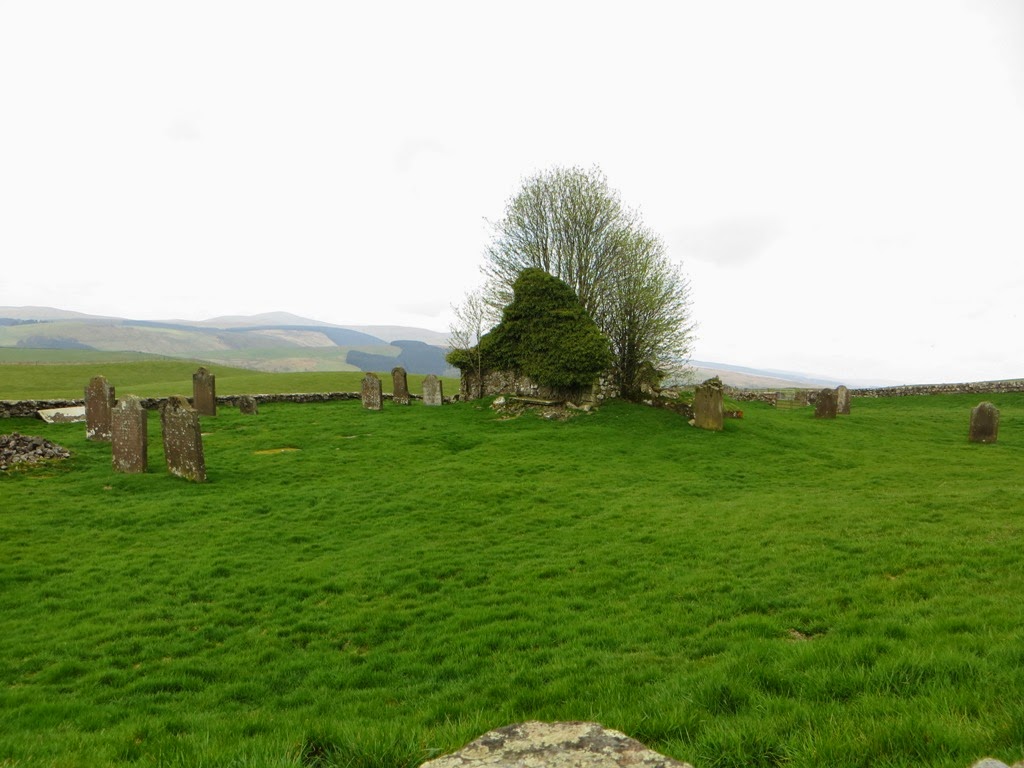 After leaving cultivated fields a short walk over the moor led us to the top which featured another fence, gate and large pile of stones where we could shelter from the wind.

Between the two of us we made 33 QSOs. 40 watts from the FT-1500M on 2m FM produced a disappointing result, with two contacts into Cumbria with M0XSD and 2E0MIX. Using QRP power with my FT-817 on 40m CW and SSB made up the remaining quota. G4ASA/P and 2E0YYY/P were contacted for Summit to Summit QSOs with my own part of England, where I am the SOTA Area manager. They were active from G/TW-004 Bishop Wilton Wold. We left the hill 50 minutes after our arrival and used a slightly different track steeply downhill across a field, to reach the car in just 26 minutes. An 11 mile drive via Penpont took us to spot height 143 on the A702 road for our next walk to the summit of Wauk Hill GM/SS-241.

Groundworkers were on with repairing the potholes in the roads of Dumfries and Galloway and we parked behind one in his JCB at spot height 143. A brief conversation was necessary to explain what we were up to and I was surprised to find out that he was aware of the summit names of where we were visiting. We went through the gate to undertake a walk of (again) 35 minutes duration. This brought us to the trig point of Wauk Hill at 357m.  This is the highest point in the Keir Hills which overlook Nithsdale. If you go there I would suggest crossing the ladder stile at the intersection of walls (NX 8376 9097) to place yourself north of the wall when reaching the summit.

31 contacts were made from here, and this time Geoff qualified on the 2m band using FM working as far as the station of Colin G4UXH in Milnthorpe 80 miles away. After a swift 40m and 2m activation we left the summit 47 minutes after arriving there. Working together in the setting up and taking down of the antenna and radio equipment and the use of just one HF and one VHF band was proving to be an efficient way of covering the maximum number of summits in the day. The heifers in the field on our way back to the car did not prove a problem as we gave them a wide berth.  Next stop after some lunch was Bogrie Hill GM/SS-205.

A nine mile drive took us down some narrow lanes to the parking place for Bogrie Hill SS-205 on the tarmac road which leads to the farmstead of Shillingland. A 2 Km walk had an ascent of less than 200m and I found this to be the most enjoyable climb of the day, picking our way along the quad tracks and animal tracks on what looked to be a well maintained piece of moorland.  We landed on the summit after a 31 minute climb and remained on the summit for just 53 minutes all told. We completed contacts with 30 stations, with 2m FM being easily qualified with seven QSOs. On 40m I had an almost even split of Phone and Morse contacts.

Parking by the roadside near Shillingland NX 783846: 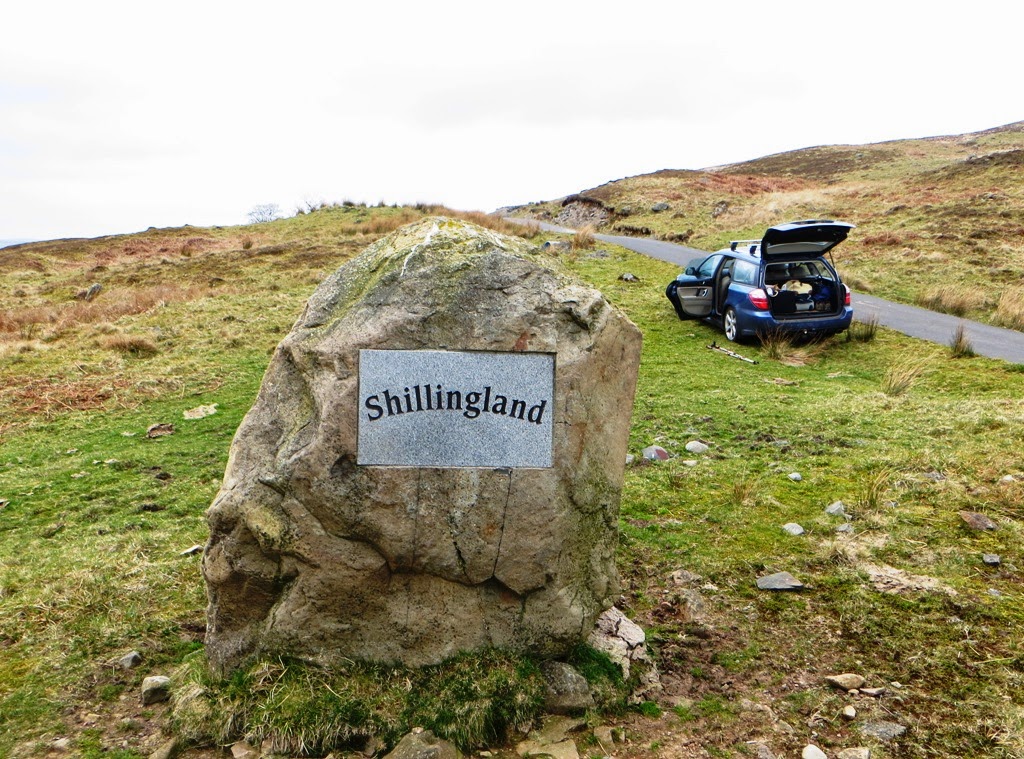 A drive of less than four miles took us to the other side of Loch Urr and the parking place for Fell Hill GM/SS-217, a summit six miles north east of the village of Corsock.  After we already climbed three summits today and being on our fourth day activating for SOTA, we were both suffering a lack of energy, however we decided to give Fell Hill a try and so we set off from the car parked at Fell Bridge at 4.45pm: 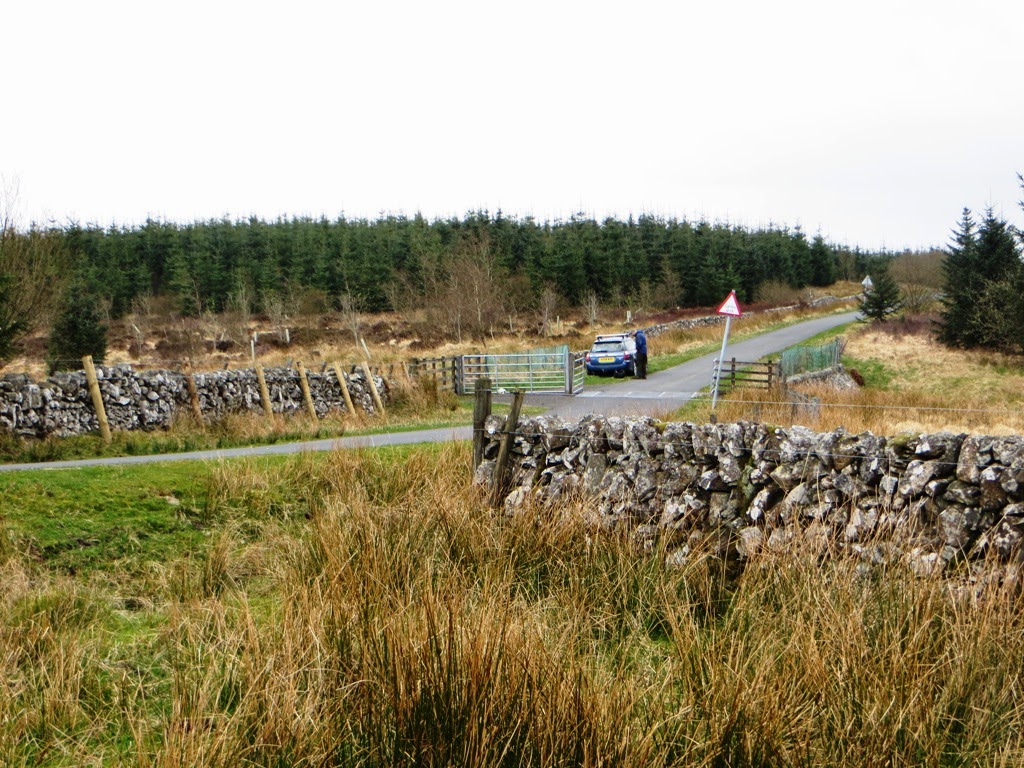 Around the area of Bogrie Hill and Fell Hill we could see that the local authority had granted permission to an energy company to prospect for wind - there were three very high well guyed vertical masts containing telemetry equipment. If you are reading this a year or more later than when it is written (April 2014), you may find a wind farm here and improved access to this summit... 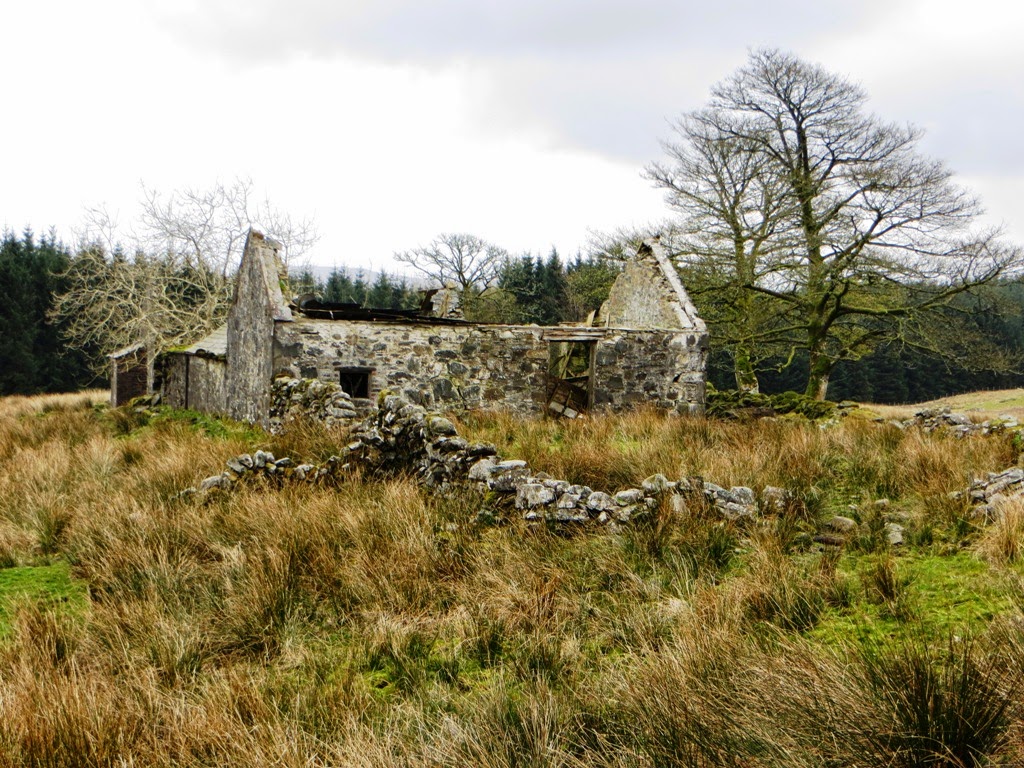 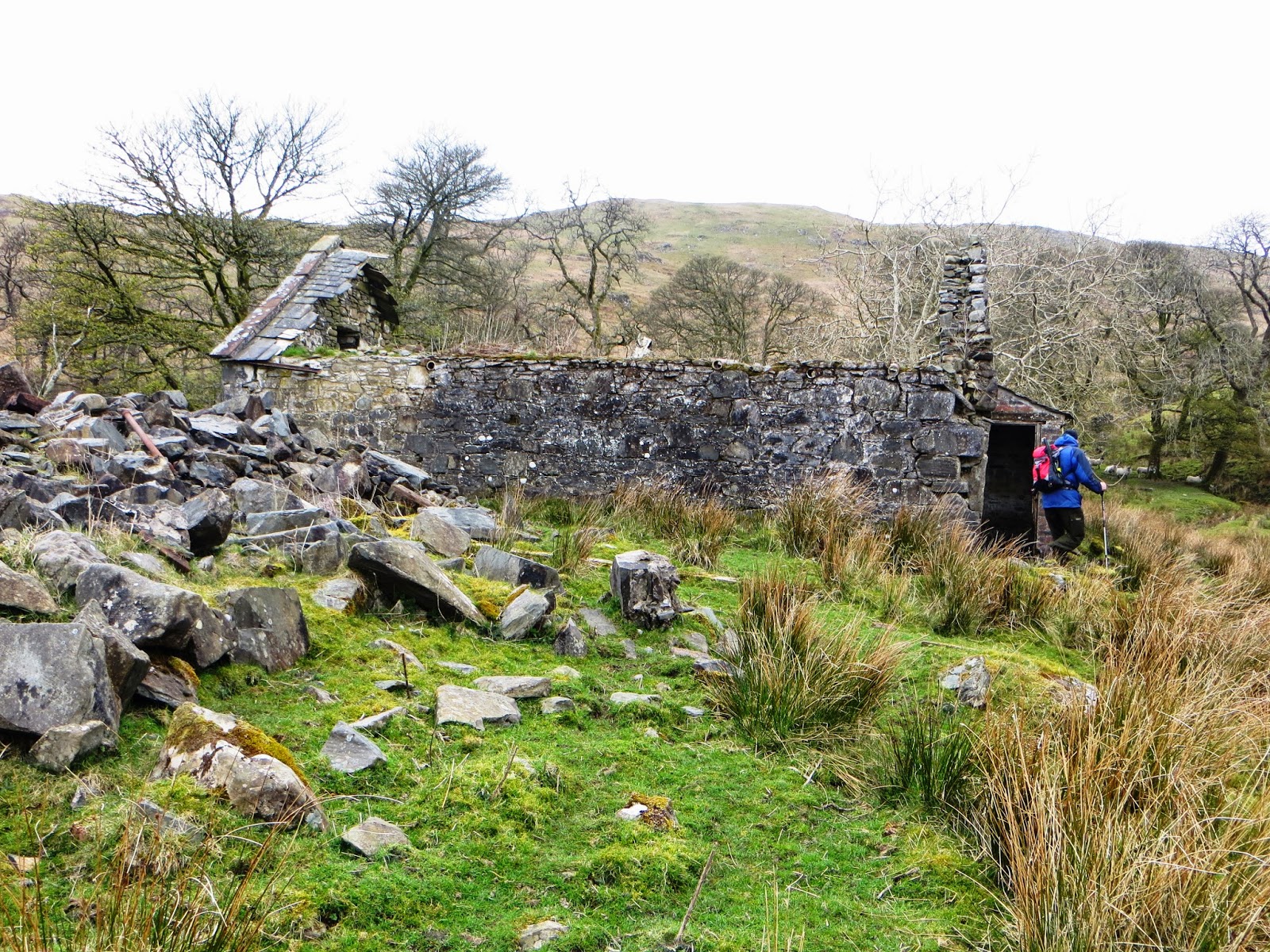 After 35 minutes walking we reach the ruined farm at Fell. We tried to calculate how long it was since it was occupied, a sad sight indeed. The track leading to Fell was extremely wet going through the pine woodland and before that in a few places, it had washed away completely meaning a short detour on to the moorland before returning to the better part of the track.  There was little ascent from the road up to Fell, and then the climb proper started. By this time we were pretty weak but the thought of a fourth activation in the day spurred us on to reach the obelisk like cairn on the summit, one hour after leaving the car, so we achieved an average speed of just over 2 mph - a reduction in speed on the usual progress we normally make on this type of one point summit.

With sufficient rope to hand Geoff trussed the 5m pole to the cairn. We made 23 contacts between us with 2m being easily qualified by Geoff - five England contacts and two in Scotland were made. We came and left after fifty minutes, reaching the car at 6.20pm, with Geoff facing the 175 mile drive back to my home at Pickering in North Yorkshire, before he returned to his home in Malvern the following day.

We needed a quick meal after our day and where better for a swift bite to eat than the KFC just off the A75 in Dumfries? A party bucket and a large Cola each helped sustain us on our journey and we reached Pickering at 10.40 pm after a very successful tour in the Middle Land of Great Britain.

By the time Geoff reached to Malvern the next day he had driven well over 1000 miles on the tour.

Statistics for the day:

As an activator and chaser the SOTA Complete Award is of greatest interest to me. This was created by the SOTA Management Team in 2013 after a great deal of thought and consultation with participants.

Here are the Top 10 standings in early May 2014 after my 11 unique Scottish activations, 10 of which counted towards my SOTA Complete score: 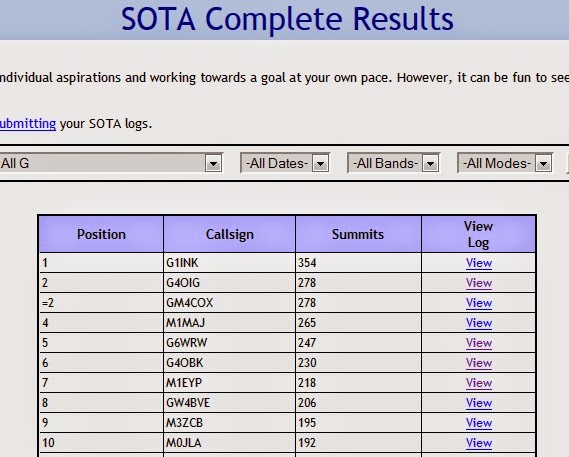 I'm keeping ahead of Tom M1EYP despite his recent spell in South Wales, but I have some way to go to catch Carolyn G6WRW up, who is 17 summits ahead of me...