On Sunday 13th April 2014 I was down to lead a group from Ryedale Walking Group (RWG) over Pendle Hill. As this meant I was part way to some unique Marilyn Summits in the Scottish Borders I decided to team up with Geoff 2E0NON and make a four day trip out of it....

As the Walks Coordinator and Webmaster for RWG I know it is always difficult to predict how many people will turn up for a walk. On Pendle Hill, a popular Lancashire summit (G/SP-005) seven people came forward including Geoff and another radio ham, Nick G4OOE who was heading for Wales after our walk to do some more activating there on the Monday and Tuesday.

We took a route I last walked in 2005 via Ogden Clough then we left it to head up Boar Clough to reach the Beacon (or Big End) where the trig point is located. I reached the top after an 80 minute walk at 12.30 pm. Geoff and Nick went ahead once we reached Boar Clough and by the time I arrived they were already on VHF 2m FM making contacts for SOTA. 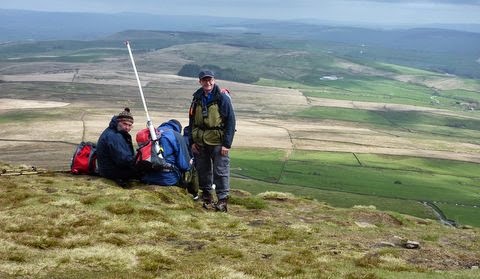 After a lunch and the SOTA activation we walked off the hill to the west towards the top end of Ogden Clough to get a view of the Ribble Valley. From there we followed the edge of the hill round to the most popular route up and down. This is Pendle side which takes you on a steep stepped path down to Barley Lane.  A tour around Lower Black Moss Reservoir brought us back to the car park and cafe in Barley just after 3.00pm. 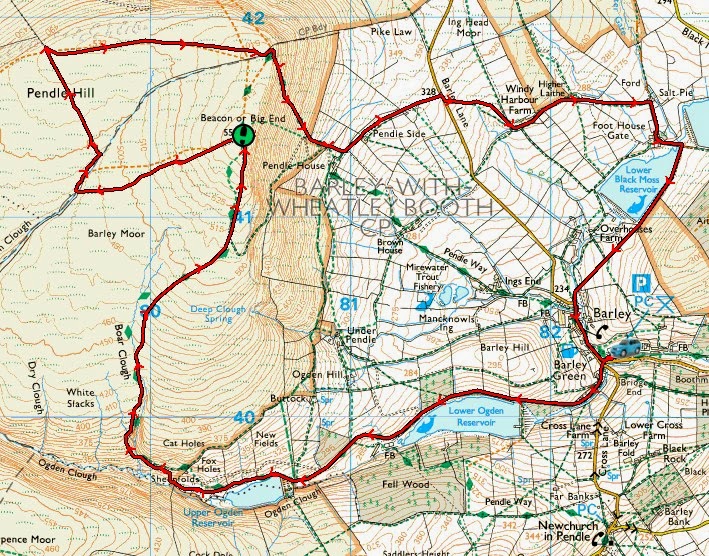 Geoff and I said our farewells to the other members of the group as they headed for the cafe. With Geoff driving, our next stop was Penrith KFC for some food. Suitably refreshed we continued into Scotland to arrive at Grange Quarry, near Lockerbie. The quarry lies below Grange Fell (319m ASL). We were walking by 6.30 pm and on the summit in 25 minutes. 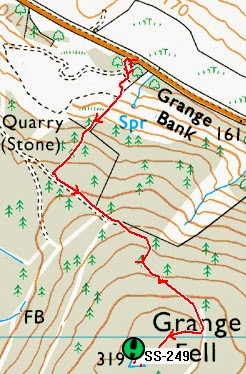 As the quarry was closed we parked in the wide curtilage to the B7068 and climbed the steep bank at the back of the quarry offices. Then it was just a case of following the fence up to a firebreak (not shown on the map) which took us to a clearing on the top of the forest where the trig point is located. We had a light rain shower on the way up and another once we had set the gear up, so we settled for a quick activation on VHF (2m FM) remaining on the summit for just 30 minutes before we headed back down. In that time we completed contacts with seven stations, which included SOTA stations Paul GM4MD/P and Gerald GM4OIG/P who were on Cairnpapple Hill GM/SS-254 west of Edinburgh. The gear we used was a Yaesu FT-1500M running 40 watts to a home made dipole antenna set up about 10 feet off the ground on a fibreglass pole. Here is my station log - we both made contact with all seven stations. A GPX trace of the route we took can be downloaded from the SOTA Mapping Project by Rob DM1CM.