We were booked into the Best Western Moffat House Hotel on a room only basis for Sunday, Monday and Tuesday nights. With Pendle Hill and Grange Fell activated en-route on Sunday we arrived at 8.45pm. After freshening up I had a walk around the town and ventured into The Stag Hotel for a swift pint of Tennant's. Here I was able to engage with the friendly Scots locals and find out about the two places where we could get breakfast food and a packed lunch from 7.00 am every morning.

For Monday I had planned a sixteen mile circular walk visiting the summits of Scaw'd Fell SS-142, Croft Head SS-100 and Capel Fell SS-082. The one snag was the long walk back to Geoff's car via the A708 Moffat to Selkirk Road, but that was shortest way back with lesser ascent than returning via the Southern Upland Way (SUW LDP), which we were using for the most part to reach the summits. I had looked at also visiting Ettrick Pen SS-074, but decided this was "a bridge too far" and decided to save that one for another day and go to it from the north instead. Here is our route which has been downloaded into the SOTA Mapping Project provided by DM1CM: 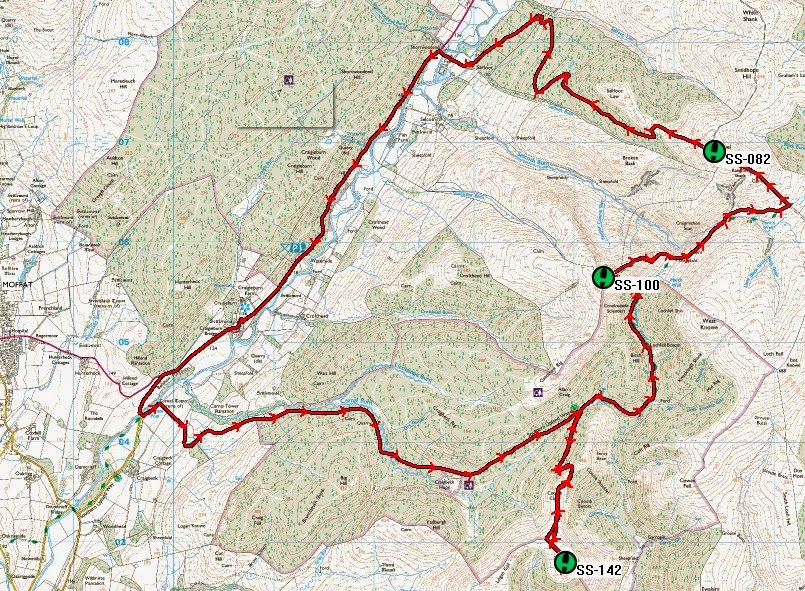 We left the car at the bridge at Belshaw Pool NT 106043 and walked along the graded SUW forestry track to where we turned right at 150043. We reached the summit of Scaw'd Fell after walking the 4.6 miles to reach it in 95 minutes.

We used the substantial cairn to support the pole - we had just enough rope to get round the cairn twice. There is also a fence close by but we opted for the cairn due to the land falling away sharply to the south near it which would improve the signals. Geoff (chief knot tyer - former boy scout!) worked the 2m FM band and I got on with 40m CW, QRP style, with my recently purchased secondhand FT-817ND using the internal battery. It was immediately obvious when Roy G4SSH answered my CQ that I was going to have great enjoyment and fun using the little radio on the summits....

Between us on 2m FM (40 watts to a dipole) and 40m CW (5 watts to a dipole) we made 24 QSOs in 30 minutes of operation. I looked at using 40m SSB but the area around between 7110 and 7130 was wall to wall with continental stations which I deemed would be unproductive with the low power, so we pulled the plug and headed off to our next summit of Croft Head.

We rejoined the SUW. The LDP left the forestry track on to softer ground at an information point (158044 - OS map was slightly out). Beyond Crookedside Scienders we followed the fence up a precipitous slope to the summit of Croft Head. This proved to be a lung buster of a climb and we needed a rest part way up the slope: 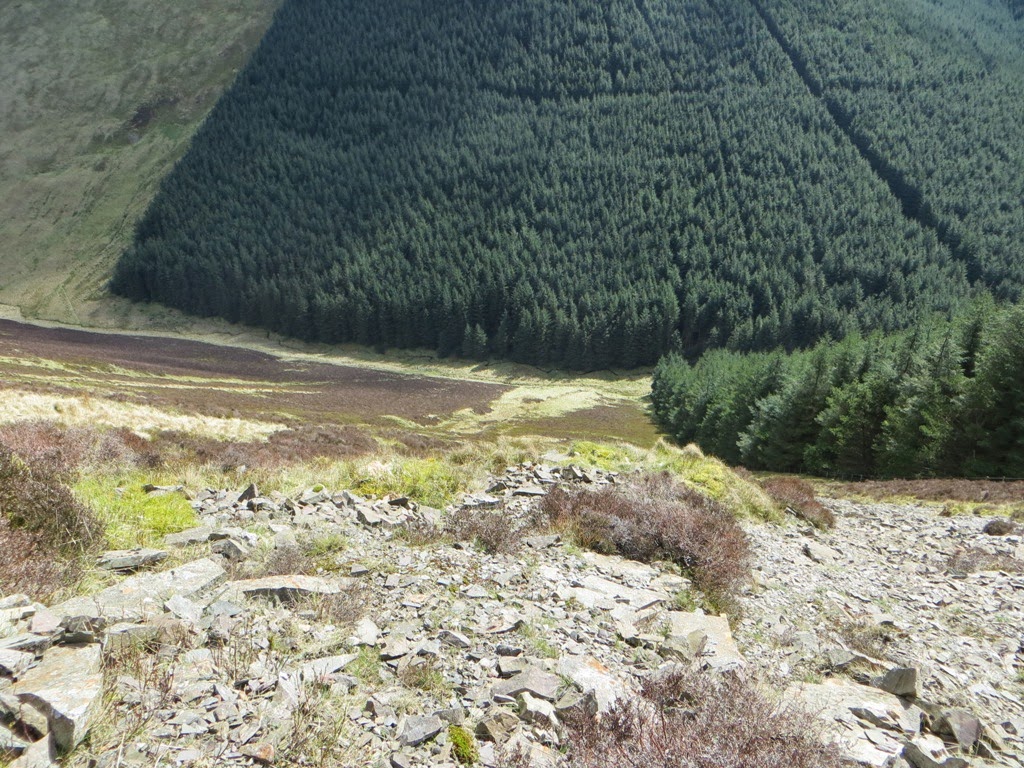 The walk from Scaw'd Fell was exactly three miles and it took us 93 minutes to do it.  Maybe taking the alternative route up Cat Shoulder, where we came down, would have been a wiser decision.... It was on Croft that we met our only other walker over the whole three days. A lone man who had wisely climbed to the summit via Cat Shoulder. We exchanged pleasantries and explained what SOTA was about when he asked the question as to what we were doing. He departed as his eyes glazed over....

We increased our QSO total for the trip on Croft Head by 32 more stations by using 40m SSB for the first time on this tour. In fact, more contacts were made on SSB from here than on CW, which is unusual. The earlier congestion around 7120 KHz had eased. With the low power from the FT817 on internal batteriesuse the best DX were contacts with four German stations - all the rest were UK.

From arrival to departure on Croft Head took 52 minutes including eating, drinking, operating and jointly setting up and taking the station down. This day was the first we had operated on several summits using a combination of 2m FM and 40m CW/SSB operation and we found that roughly one hour spent on each summit was sufficient to work any operators that may have heard our signals. The ability to self spot was patchy - sometimes cellular access was available (Vodafone) but at other times, not so. Reliance on sending SSH on 7032 KHz usually brought a response from Roy if we had comms, otherwise CQ calls revealed chasers calling within a minute or two. When moving to SSB it was harder to attract attention without a self spot, however most often it was Mick M0MDA, also in Yorkshire, who found us first.

Our walk to Capel Fell was a steady one, again using the SUW which deviated from the map north of Park's Well on one section but as it was waymarked that way we took it and it was a good route. When we reached the fence at 171063, close to Ettrick Head, we looked up to Ettrick Pen SS-074. I would have loved to have gone for it, but the extra 5 miles and 1500 feet ascent would have been too much for us in the day.

It took 70 minutes transit time from Croft Head to Capel Fell and we reached the summit at 2.25pm. We had a longer stay on this one - 70 minutes, in which we made 28 contacts between us. We also eat and drank a fair bit too - knowing that we had a two hour walk back to Belshaw Pool of six miles.

Addendum October 2019: If you read this blog with a view to activating Capel Fell on HF or 2m SSB please contact me via the email address in QRZ.COM to let me know, as I still need to chase the summit for SOTA Complete! 73 de Phil G4OBK 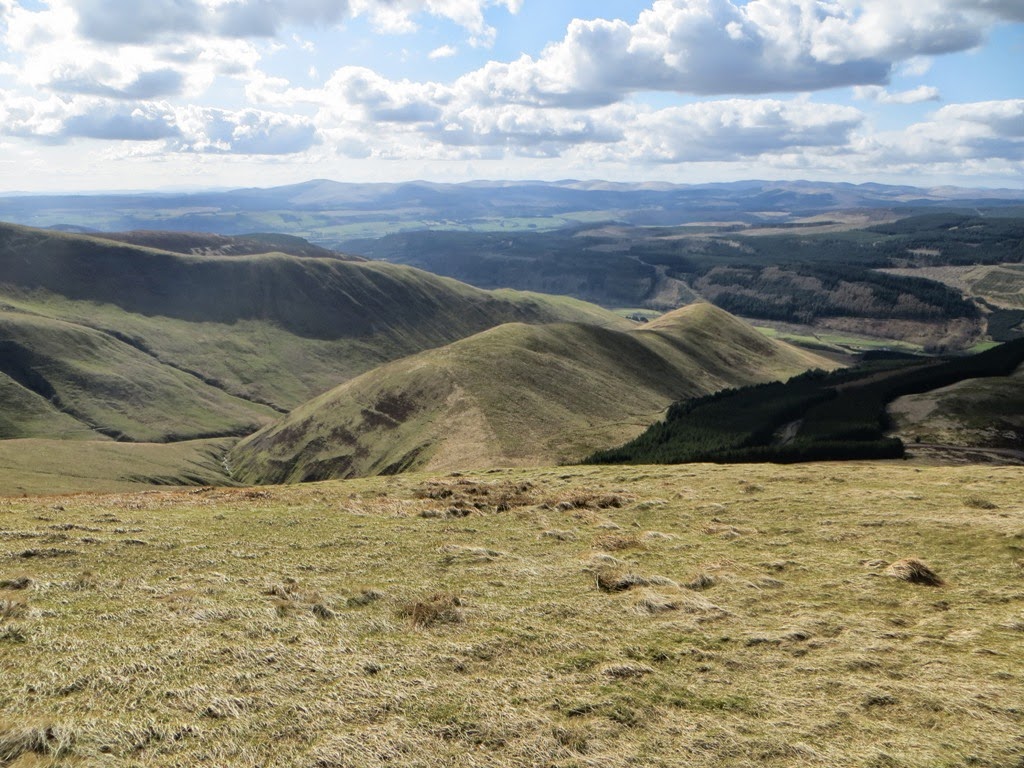 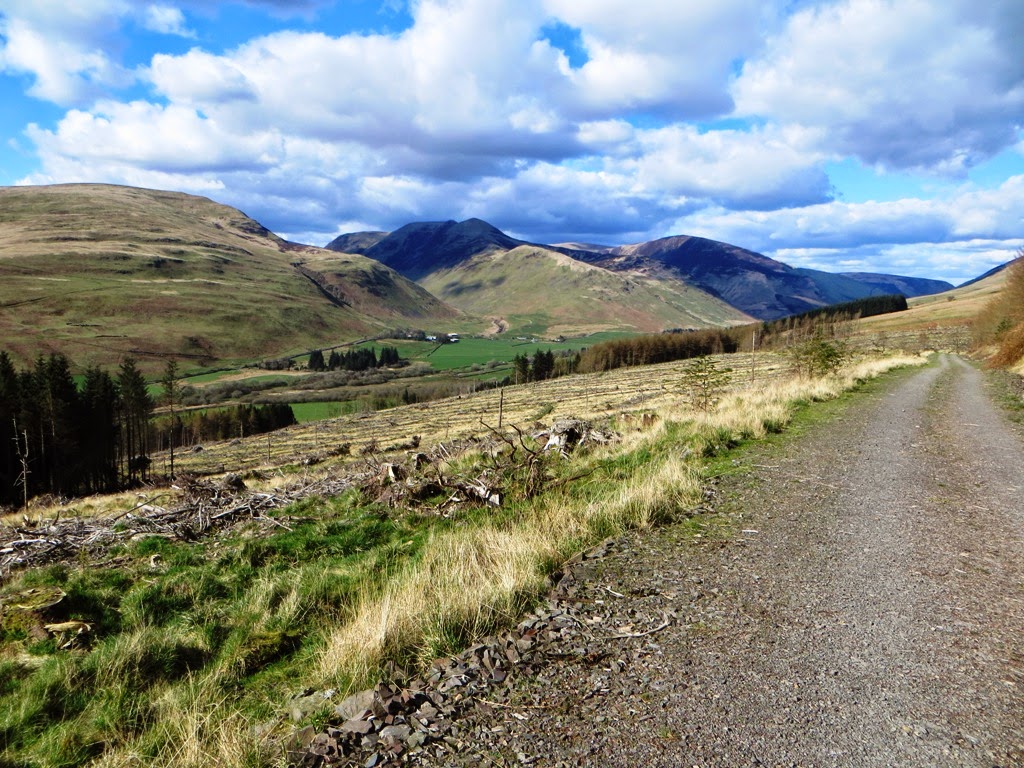 We reached the car at 5.15pm after a 9 hour day on our feet and on our backsides operating for Summits On The Air. Our first stop was The Stag Inn at Moffat for a cooling pint of Tennant's before returning to our hotel next door to freshen up before going back to The Stag for our main meal and drinks.