As a Chaser and Activator  Completist I get great satisfaction to finish off a SOTA Area or Association and this activation on GW/MW-020 finished of the GW/MW forty summit grouping for me. I completed the GW/SW area a few years ago and I hope to one day complete the GW/NW area. I still need to climb 24 out of the 77 summits in the North Walian area, having chased them all several times. Route taken to GW/MW-020:

The start point for GW/MW-020 is well documented - at the end of a track at SH 892106. Parking place for one car in an extended passing point with the farm track junction going to the summit opposite: 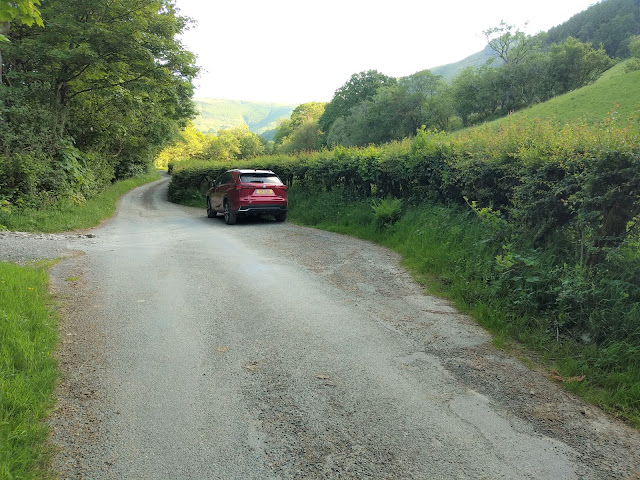 I set out at 07:45 and finished the walk in the summit area at 09:00, over a distance of 1.8 miles with an ascent of 1000 feet. Over the distance the walk was full of sheep - once I got through the first gate. I reached the unoccupied farm at Craig-For and exited to the rear of it up the Nant Fford gully behind the farm up on to the higher moorland.

Alan (GW4VPX) had told me that the direct line above the gully to Esgair Ddu highest point across was boggy marshland.
Weighing up the 25m activation drop zone I walked over the relatively dry land towards the wood and trig point. I set up my 5m travel pole against a fence post there at SH 872100: 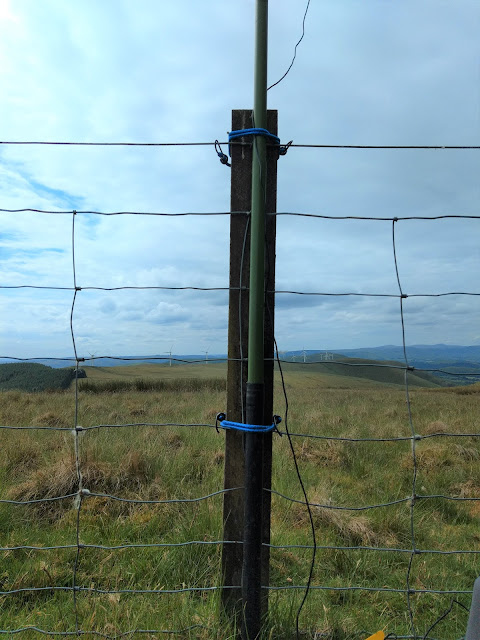 There were good views south to the wind farm on Mynydd y Cemmaes, but I felt the large plateau would be a useless site on which to propagate a signal with basic equipment on VHF. I could hear fellow Mountain Goat @M1HAX/P on Burton Hill G/WB-020, but Richard was running 50 watts and whip against my 5 watts and whip, so my calls went unanswered... I gave up and got on with connecting my Elecraft KX3 and associated HF equipment.
As on the other five activations in the week I started off on the 60m band, working a handful of stations in CW/SSB.  I was on my own with time on my hands, the summit was comfortable. Conditions on the air were pretty good too... An earlier CQ on 2m had produced no result then I saw that local MW7GWR (Dave) had spotted on SOTAWatch that he heard me then I dissapeared (probably on to HF). I gave him a call on S20 to break my duck and there he was for a brief chat - there were no more takers. I did my usual run through 40m, 30m, then 20m but with my dipole linked for 30m I tuned it with the KX3 ATU for 10 metres. Success - QSOS with eleven EU stations on CW in seven minutes on 10m as I hit a purple patch of sporadic E, best contact being with my long time friend Jan operating outside the Czech Republic as OE/OK2PDT/P on OE/NO-137. Roger F5LKW was also worked on 10m and suggested we try 6m after I had done the business on 10m. I moved to 6m and with 20m dipole tuned again via the ATU, and worked two Frenchmen - alas not Roger but Eric F5JKK and Nicolas F5MDY! ODX on the day was at 0940z (early for 20m) over the pond to KD1CT on CW. This is Robert, who lives in New Hampshire:

All told I ended up with 78 QSOs - a record number for GW/MW-020 and the first ever QSOs from there ever recorded on 6m and 10m. This activation was also the completion of the 40 summit GW/MW area for me - this was "proper completion" as I have also worked all 40 summits from my home QTH as a Chaser several times - very satisfying to finish, leaving me GW/NW to complete for the whole of Wales! God willing, with a following wind, I may just do it.
Posted by Phil G4OBK at 23:59