Our first attempt at Talaia de Sant Joan came to nothing due to the weather, but at least we got the jalopy filled up with petrol at a garage in the middle of nowhere near to IB-007.  When we arrived on the Sunday the first priority was to get some lunch and then activate IB-009. At 3.00pm when we were driving on an almost empty tank the only garage we passed was closed, so it was a relief to get some fuel. After filling up we went to the likely parking place to view the summit. We had already decided that the activation was not to done that day, but it was good to at least view the summit and the parking arrangements for the next day. The summit had been activated before  - almost a year previously by Inaki EB2GKK when he made 21 SSB contacts on the 20m band. Unfortunately I did not work Inaki then - so this summit would not be SOTA Complete.
Returning to the same place the next day we were greeted with a fine sunny day as we set off walking up the road, which was quite rough. This was our track collected on my smartphone and uploaded to Viewranger: 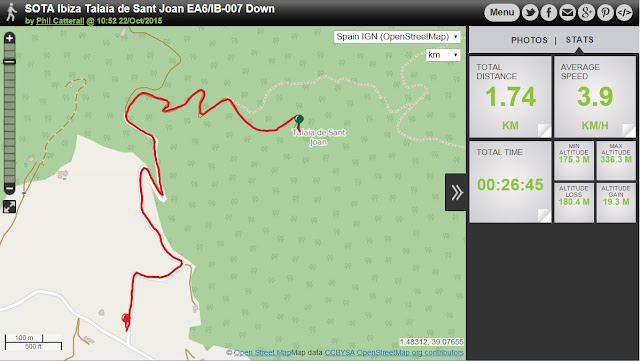 The walk to the summit was on a broken metalled road and every few hundred metres there was either a villa, one being built or a plot marked out for a future villa. Here a couple of guys are constructing a wall on one of the plots: 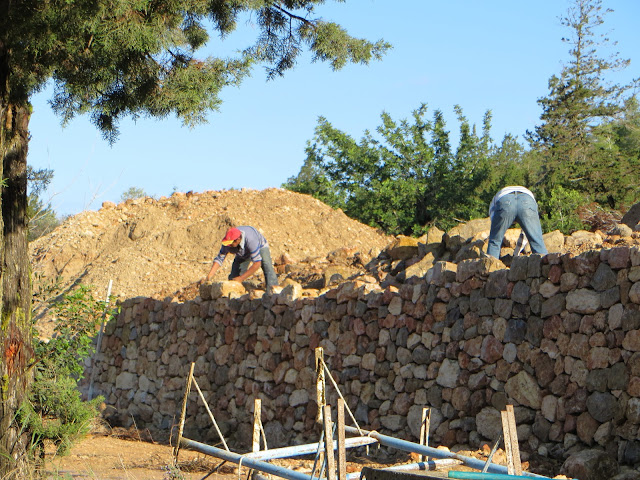 We left the metalled road (can be seen on the map) to climb up this rough track - note the blue paint on the rock suggesting this what the way up perhaps? Yes it was and there were more plots set out almost right up to the radio mast on the summit. 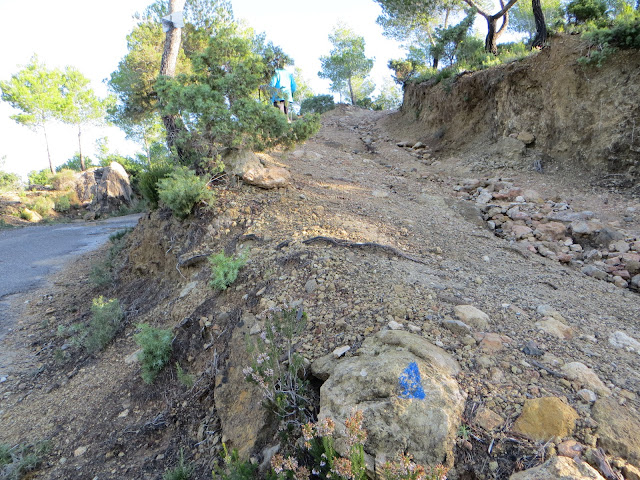 Once the top was reached we had a scout round. There was a Fiat Panda rolled over lying just below the summit, several radio masts and an observation tower with a locked gate so it wasn't climbable. I also located a crumbling trig point. The views were far reaching despite the summit only being 361m high. 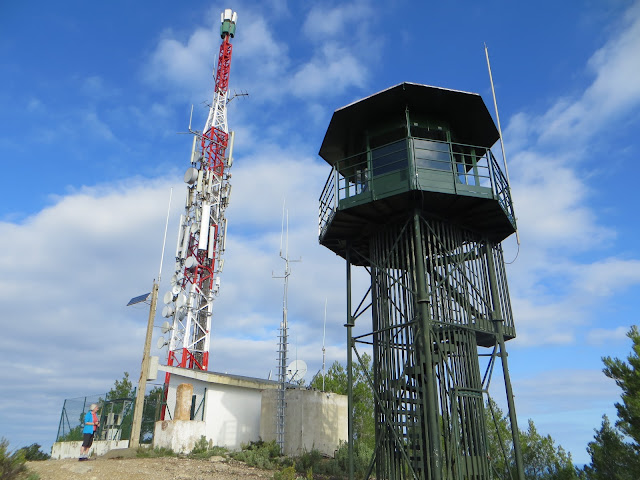 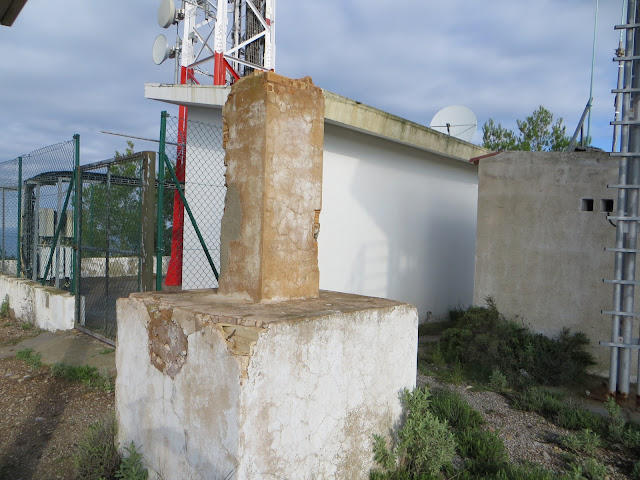 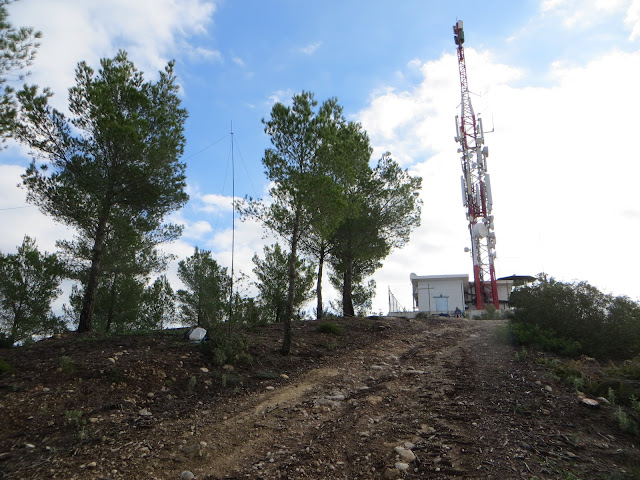 I set up the station a little way down from the top and started on CW. When I changed mode to SSB to my chagrin I realised that my transceiver was faulty. When I returned home it proved to be the microphone insert that was open circuit.  Anyway my 50 minute session (with 15 minutes wasted trying to get the rig working on SSB) provided me with 47 European Morse contacts in CW on 10 and 14 MHz including a contact with Don G0RQL, who was worked cross mode - great fun! I listened on SSB and sent Morse more slowly that I normally would do to make the contact with Don. The walk back down was straightforward as we returned via the same route. I took a couple more pictures of a large Villa and an old rusty motorbike resting against a wall: 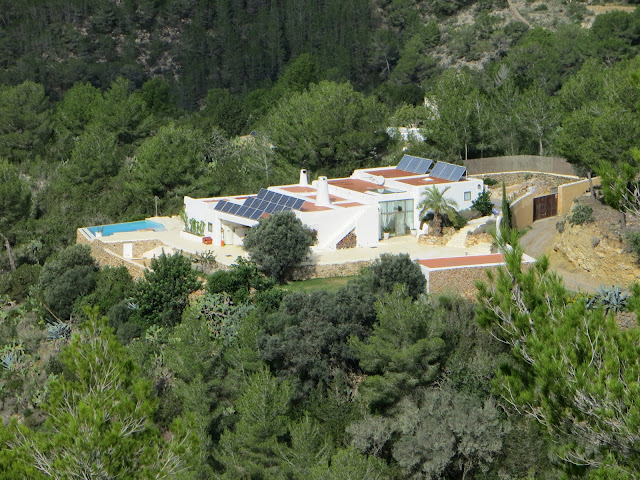 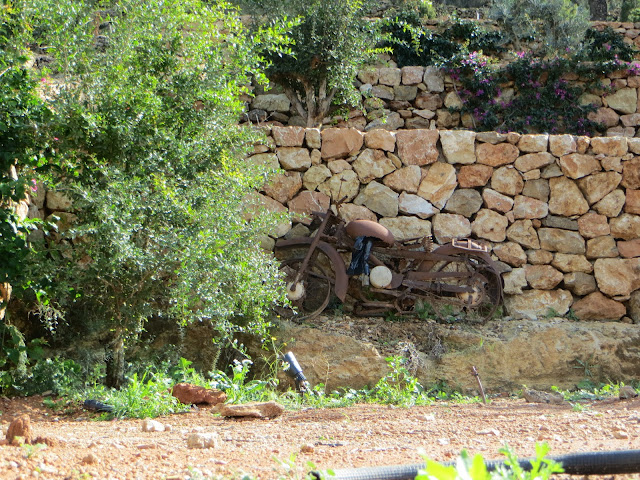 Despite the problem with my FT-817 on phone this was a most enjoyable activation. The weather remaining settled as we headed off west beyond Ibiza Airport to our next summit EA6/IB-001.
Posted by Phil G4OBK at 20:45