Two days after my epic climb over the Karwendel Klettersteig I chose an easier option.  The nearby 2196m high Grosse Arnespitze (DL/WS-036 and OE/TI-391) a border double 8 point summit was tempting, and had never been activated for Summits On The Air.  This however, was another unknown quantity, like my previous activation.  So instead I chose the 1391m high Hoher Kranzberg and the 1588m wooded summit of Grunkopf as these two summits looked more straightforward.

I caught the usual 8.50am bus out of Seefeld, alighting at the railway station in Mittenwald. A funeral was about to take place as I passed the church and the locals in their national costume were gathering: 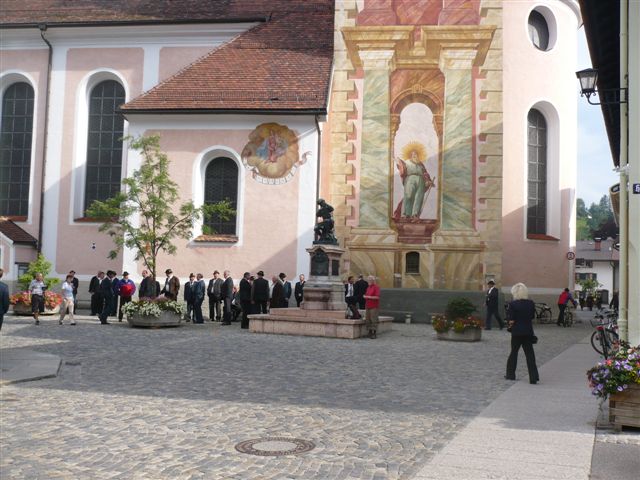 From here I walked across the town to reach the Kranzberg Chairlift . There was a large car park by the lift station. A one way journey cost €5 and probably saved me around 45 minutes and 300m of ascent.


After packing up the station I descended from the summit to the valley south of me via the signposted path No. 813. I then bordered the shore of Ferchensee, an inland lake in the valley where there was a cafe and facilities. 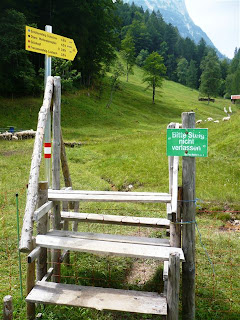 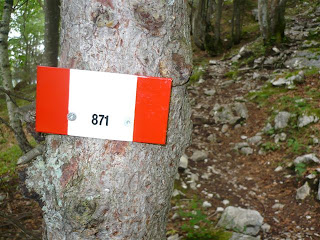 From the eastern end of the lake I took the 876 and then the 871 footpath (which again follows the German / Austrian border) to reach my second summit of Grunkopf DL/WS-052.  I lost the path in the woodland once for about 15 minutes, regaining it again after continuing to climb up through the woodland.

The walk between summits took me almost 3 hours - much longer than I had anticipated, as there was a significant height loss which had to be regained.  I was using a 1:50000 German Kompass map as my 1:25000 Austrian Wanderkarte map did not cover part of the walk.

As I was setting up my antenna it started to rain.  Thankfully it was just a brief shower but it was worth putting on my jacket and trying to keep my transceiver dry.  Again I was mindful of the time and needed to be back in Mittenwald to catch the 5.00pm bus back to my hotel.  I had the time though to try all three bands, 30m, 20m and 17m and was active for just 30 minutes.

Once again Roy G4SSH was first in the log followed my other friends from Scarborough, Kevin G0NUP and Nick G4OOE.  33 contacts were completed in Morse, but only three (disappointingly) were made in voice on the 20m band with Terry GO0VWP, Bob G6ODU and surprisingly G4SSH!

I finished off with the activation with a contact on 18 MHz with SOTA Activator/Chaser N4EX Rick in North Carolina.

It took me almost 90 minutes of steady downhill walking on a good path to reach Mittenwald. There was a bakery across the road from the bus stop from where I purchased and downed a litre bottle of Cola during my 15 minute wait for the bus, which took me back to Seefeld with another 10 SOTA points in the bag.
Posted by Phil G4OBK at 10:58