G4OBK/P becomes a SOTA "Mountain Goat"
January 7th 2013 in Ireland
In late 2012 my XYL Judy and I decided to book a short break in Ireland in early January. Flights were booked from Manchester via Jet2, and a car was hired which we collected at Dublin Airport. The Transpennine train was used to get from Yorkshire to Manchester Airport. This is an excellent service from east to west.

Our holiday was as usual booked via the internet. As a subscriber to Travelzoo I get sent some excellent mid-week deals and this holiday was a combination of a Travelzoo deal staying at Clontarf Castle Hotel on the outskirts of Dublin for two nights, and three nights which I booked on a separate internet deal at Druids Glen Golf Resort, which was reportedly five star, and yes, it deserved it. These were the sort of places we would probably not be prepared to pay for at full tariff in summer, but in winter the tariff is most reasonable!


On arrival at Dublin we headed for Eurocar to collect what turned out to be a Hyundai Diesel model i40. Big mistake! When we reached the hotel, about 35 miles south of Dublin Airport, the electric handbrake locked on the car whilst stationary and the car was stuck on the posh hotel concourse..... I somehow managed to free it off, but in the process the handbrake switch broke off and fell inside the centre console housing, so first job next day was to drive back up the coast via Bray and exchange the vehicle for something better. There was no problem doing this and I was given a very solid VW Passat Diesel Saloon instead.

The climate in Wicklow in January was surprisingly mild and we were amazed to see flowers growing in municipal parks and on traffic islands around Dublin, indicating a lack of heavy winter frosts.

I had taken my HF amateur radio gear (Yaesu FT-857) and I had planned to activate the Marilyn SOTA Summit of Great Sugar Loaf for 9 points (6+3 for the winter bonus) for Summits On The Air. This would give me the 1000 points I needed to qualify for the Mountain Goat Award, something I had been striving towards since 2005 when I started climbing summits whilst carrying radio gear (some call it "Adventure Radio").

Along the way I had become slightly distracted thanks to a certain Mr A Wainwright and the Wainwrights On The Air (WOTA) scheme, although taking part in that got me on top of all the Lakeland summits earning me valuable SOTA and WOTA points, effectively killing two birds with one stone.

So on to Great Sugar Loaf and my Mountain Goat activation. This took place on 8th January 2013. It was a cloudy, windy miserable grey day - not the best for sitting around for over an hour on a 501m high six point summit trying to send Morse Code, but this is what I did, with my ever patient XYL (Wife Judy) sat by me.....
Using the OS Ireland 1:50000 map No.56 I found a parking spot on a tarmac back road south of Kilmacanogue, grid ref 247128. From here we found a path through the gorse to the main path which goes up to the summit at 237127. The hill consists of attractive quartzite rock with the final ascent an easy scramble. There was no cover on top.

The activation complete we packed up and headed down for a pleasant lunch and celebratory drink at the very welcoming Glencormac Inn in Kilmacanogue, only a mile from the summit. It should be noted that this pub does not serve meals in the evening, if it had then we would have returned there as it was excellent. 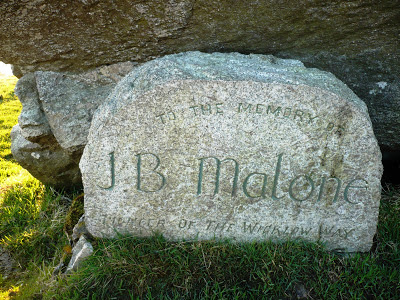 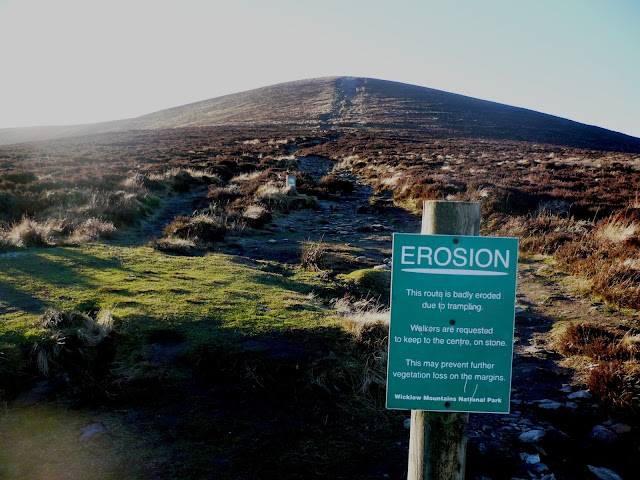 This was an impromptu activation of Ben of Howth EI/IE-072 on our way to catch the plane out of Dublin back to Manchester. The summit is the lowest Marilyn in the eastern sector of Ireland.


The summit lies on the outcrop of land to the north of Dublin Bay and is easily accessible after a short walk to the top from the car. You could also ride to the top on a bike. I found that a tarmac road has been built on the western side of the hill to service the radio facility on the summit. I parked our hire car on the rough track on the east side of the summit and climbed through rough land full of gorse to the top. My XYL Judy remained in the car. If I had continued a little further on the track I could have used a path, and this was the way I came down. On the west side of the hill I found a narrow tarmac road built to service the radio facility on the summit which would take you to within 10 metres of the top, but OS.IE mapping does not show this.

My activation was only just qualified. My equipment was low power (Yaesu VX-170) and my antenna was inefficient,  just a quarter wavelength whip, however I made contact with:

Thankfully my friends in Wales across the water, were on the air at the right time. My 15 minute activation complete, we made our way back to the nearby Europcar Depot at Dublin Airport to return the hire car and catch our plane back to Manchester.
Posted by Phil G4OBK at 15:00 No comments: