For the first time in some years and with a respectable sunspot count of over 100, I decided to enter a worldwide amateur radio contest - this is the annual CQ WW CW Contest which always takes place over the last weekend in November. CQ is an American Ham Radio magazine, so it comes as no surprise that the contest falls around the time of their Thansgiving Day Bank Holiday. It also happens around the time of my birthday - the 28th November - this time round I was 68 on the Saturday of the contest. With the current lockdown in England there was no better time to take part in a 48 hour contest - although I would only operate during daytime hours.

When I was younger I would take part in most of the worldwide contests and try to stay awake and operate for the full 48 hours. This just isn't possible for various reasons now so an entry on the 10m band when there is propagation mostly during daylight seemed appropriate. So what equipment should I use?

Ideally a dedicated antenna, such as a 5 element yagi built for the 10m band would be ideal, however this was not possible so I used my every day antenna - the multiband G3TXQ Hexbeam which on 10 metres is claimed by its maker MW0JZE to produce 3.6 dBd gain with a front to back ratio of 16 dB. The rotatable Hexbeam is fed with Ecoflex 15 coaxial cable and it is fixed at 12m above ground on a Tennamast. It is rotated above a 4m/6m yagi by a Yaesu G-1000DXC motor:

On the Saturday morning after opening my birthday cards and present from XYL Judy - a new jumper and fleece dressing gown, I ventured into the shack, however the 10m band in North East England was devoid of signals at 0830z - at 0848z though something started to happen and RN9S in EU Russia was the first station heard and worked.
Plenty more stations were worked immediately afterwards and within an hour of logging RN9S I had 20 stations in the log. Running by CQ Calls on a frequency proved pointless as I got few takers, even using 400 watts of power, so search and pounce was my best option. In the days previous to the contest I had downloaded and re-familarised myself with the contest logging program Super Duper by Paul O'Kane EI5DI. The program is easy to use compared to some of the newer contesting software - its heritage dating back to around 1990 when we were using DOS. Its not too complicated and after a gap of more than 10 years using it, with a little practice, I was up and running. I had the CAT connection and Winkey CW keying from my keyboard using the microHam CW Keyer and Bencher paddle key.  My station was the Yaesu FTDX101MP and Linear Amp UK Gemini DX1200 amplifier - having decided to run in the single band 10 metres, unassisted classic high power section of the contest.  I also used for the first time in a contest, my SDR Play RSP1A receiver displaying 28000 - 28060 KHZ on a seperate monitor. This proved very useful when the band opened up but was not so busy, as new CW activity could be seen on the spectrum display. The transceiver could then be put straight on to the frequency of interest to see if I had worked that call. As the band was relatively quiet all through Saturday the information provided by the extra SDR receiver proved to be a Godsend!
Saturday proved to be the poorest day compared to Sunday, when I was able to run and work 65 stations in an hour - mostly from Eastern Europe and Russia. Among them was 4L6QL, a country and zone multiplier. My best 10 rate was 140 an hour, but this was short lived! Some of the sending speeds used by the serious stations were ridiculous, and to the untrained ear would not have been recognisable as Morse Code. The special callsign stations in Cyprus and Zone 33 were the worst culprits. I took a casual attitude to the contest and took a break when things were quiet, and an hour off for my lunch both days. On Sunday a two mile dog walk interupted my activity and I guessed that some USA stations were not worked that could have been.
On the Saturday session the first USA station heard and worked was at 1425z. This was N4XD (Zone 5), this was just after working P40W in Aruba. Only five USA stations (all Zone 5) were worked on the Saturday and the opening finished with N4BP at 1433z!  N4BP was the most consistently heard and probably the loudest of the USA stations heard on both days. I must have tuned across his signals at least 10 times over both days and he was always the loudest. After USA faded out it was Caribbean and South America until 1625z when the band closed, but there lean pickings and I ended the day with 73 valid contacts, 33 countries and 14 zones. 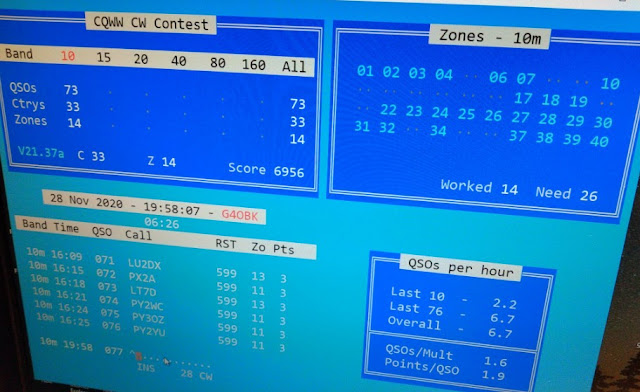 Sunday dawned and having lingered over breakfast I went into the shack around the same time to find 10 Metres coming to life at 0850z. This time R4GM was first into my log. Over the last 10 years contesting has changed somewhat - the one most noticable thing are the special shortened callsigns used by the seasoned contesters. Calls such as G3T, D1M, C4W, P3X etc. Years ago you would have taken these for pirate stations! The other noticable changed is the earlier mentioned sending speeds from programmed keyers wound up to ridiculous speeds of 40-50 WPM.  Propagation conditions on Sunday were better for sure, with a great opening to Eastern EU and Russia in the late morning - the spectrum display on the RSP1A was not needed as the band was full of big signals! More EU countries were logged via reflective propagation rather than direct path so that boosted the multipliers to some degree. Either side of the lunctime period some good DX worked such as 5T3, CX, ZD7, CE, KP3/4s, PJ4, 8Q7, TA, PZ5, C6, ZF and W (Zone 4 and 5). The only gotaway I heard and called for 15 minutes but which gotaway was VK3JA from around 0900-0915z. He had a long line of callers which I couldn't hear, but he didn't hear me!  At 1328z I worked C6AGU and then K1TTT but no other USA stations were apparent. I took an hour off to walk our dog, returning at 1424z to find several USA stations working at good strength in a far better opening than the previous day - 15 were logged, including Zone 4, with W4DD being the last USA station logged at 1550z. The only Canadian station logged was VO1HP in Newfoundland. 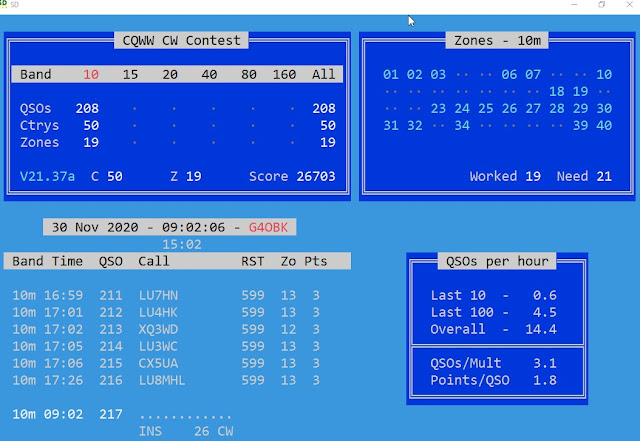 From then on it was South America only until the band was devoid of signals at the later time Sunday, of 1730z. My Cabrillo contest entry struggled with the callsign for AZ1A/X which was Argentina. What the /X stands for is not known. The contest organisers will hopefully allow me the 3 points for that one...
*In early December CQ Magazine released raw scores - at
present I am coming in at 5th in EU in the single op high power section: 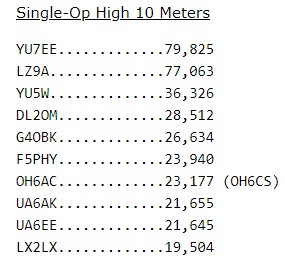 I really enjoyed my time in the CQWW CW Contest this year, a refreshing change from the daily routine of SOTA Chasing and DXing using WSJT-X on FT8... My final claimed score was 208 QSOs with 50 countries and 19 zones for 26634 points. The only station I heard of any significance and did not work, was VK3JA who has a great ham radio station. Steve's QRZ.COM entry tells the story -  plenty of real estate and a Rhombic antenna centred on EU on a lovely hilltop QTH in Victoria. Maybe I'll work him next time...
73 Phil G4OBK
Result: #1 England #4 Europe (Up 1 place on claimed scores) 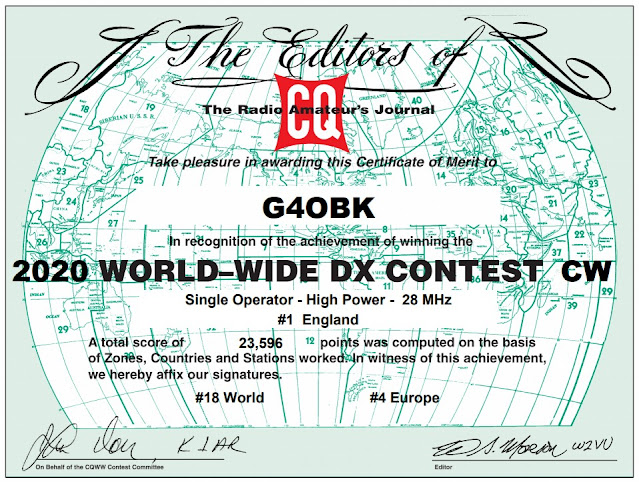