I looked out of the hotel bedroom window above me at Nine Barrow Down (visited the previous day) and saw what the weather forecast predicted - heavy rain...

The hotel breakfast was superb. I was in no hurry today though as I left the car park at 8.45 am with just two summits planned and an overnight stay in Bristol, before driving home to North Yorkshire the next day. A long drive in rain from Swanage took me to the ribbon village of Morecombelake, which lies below Hardown Hill in Dorset. I decided to wait until the rain abated, and it did, but it started again as soon as my gear was taken out of the rucksack on the summit...

Parking was quite difficult on the village road but I got into the side of the road at SY 406947 and walked south west up the narrow hedged in track on the left. The path was clear but I thought that if it wasn't cleared in summer as it was so narrow it would be covered with brambles then. Once near the top I made for the antenna mast and transmitter building where I hoped there would be some shelter from the rain which was starting again...


It wasn't too nice where I sat... dog walking country this, I'll say no more. I quickly made sufficient QSOs - just 10 contacts in 5 minutes on the 30m band before I packed up quickly to save damage to the radio. My golf umbrella was forgotten and left in the car... 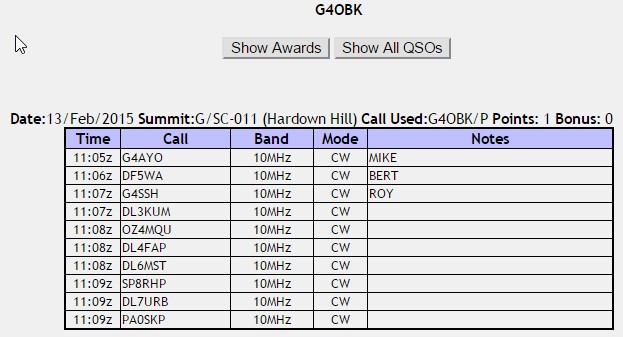 At least my brolly stayed blue - it would have probably been brown had I used it there (note comment above...). I carried my brolly though for my final activation of all English Summits on Lewesdon Hill later that day. 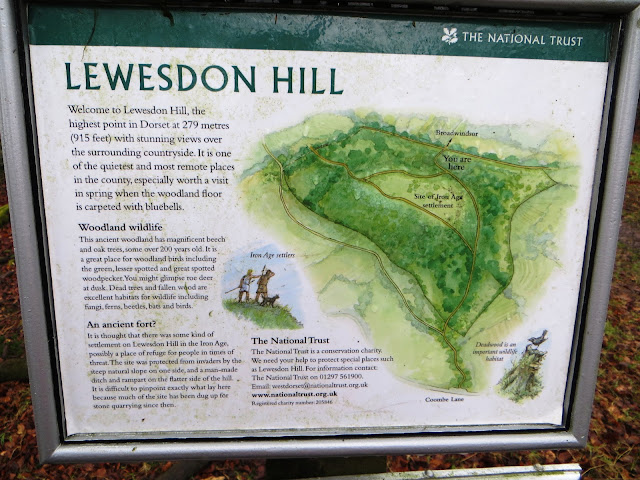 Still in Dorset I arrived at the nearest road to the National Trust owned Lewesdon Hill from the south - via the B3162. Previous activators had sought permission to park in Stoke Knapp Farm. I drove around the triangle of roads around the farm. There was nowhere safe to park on the roadside without blocking the road or a gateway. I'm always reluctant to ask permission by knocking on doors and there was no one around the farmyard to ask. To save a longer walk from Broadwindsor the village to the north, I settled on parking just on the side of the B3162 road at SY 441016: 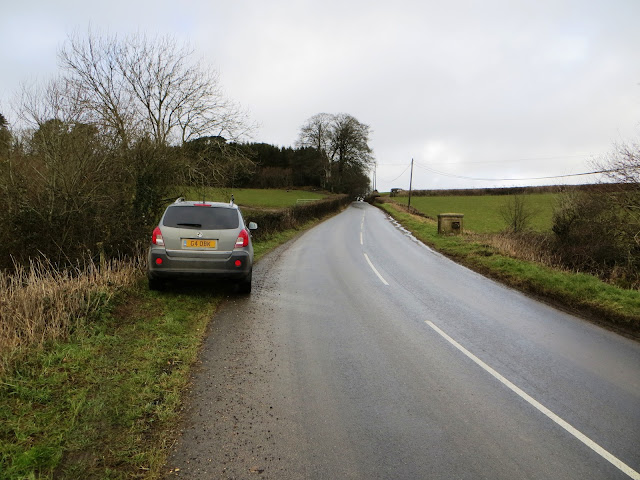 The rain had stopped but I carried my brolly - it came in later, as I set off on the short walk to the woodland above me marking the summit.  I left the road at Stoke Knapp heading up the track shown on the map as Lewesdon Hill Lane. My last English Marilyn Summit was a good choice. I discovered a 300m long medium width clearing in a Beech Wood. That was the summit.  I settled down my higher powered station for a long stay amongst some large fallen tree boughs. I had carried my Yaesu FT-857 for the first time use on this tour and I used a 40m link dipole to try to a least double the QSO total normally made on previous summits. I had no time constraints so it was a case of working down each band I had on CW and SSB until there was no one else there to work. 115 contacts were completed on the 40m, 30m and 20m bands. 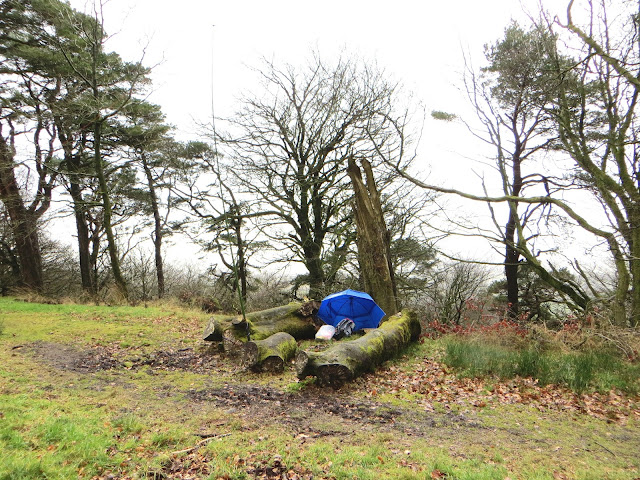 After 90 minutes in rain, I was still dry under the brolly apart from my overtrousered legs. I packed up and did a little dance to celebrate that I was the first operator to SOTA Complete all current 176 Marilyn Summits, a task which had taken me almost ten years. Writing this several months later no other SOTA Chaser - Activator has yet achieved this. When they do I will buy them a drink! I count myself first as a Chaser, as I spend more time doing that than I do as an Activator. Chasing is great, and once you have the gear it is cheap and convenient. Activating is not, it is expensive, time consuming, has a tough steep learning curve where mistakes will be made if real success is sought. It is also uncomfortable at times and very challenging and adventurous but it keeps you very fit if it can be done regularly. Combine all this with a love of driving, travelling and walking in the country and this makes SOTA activating a great part of my life long hobby of amateur radio.

Elated, I drove up to Bristol, stopping at a fast food spot on a roundabout somewhere near Chard. The following day after my 14 summit solo odyssey I finished up back home in North Yorkshire.

This had been a testing tour, mainly due to me being under the weather whilst spending two nights in Youth Hostel Dormitories near Lewes and in Littlehampton before a comfortable third night in a decent hotel in Swanage. I'd driven 750 miles through tens of English Counties and once again confirmed to myself how much better life is in the north of the country.

Which was the most beautiful summit? Lewesdon Hill in the rain of course!
Posted by Phil G4OBK at 07:11