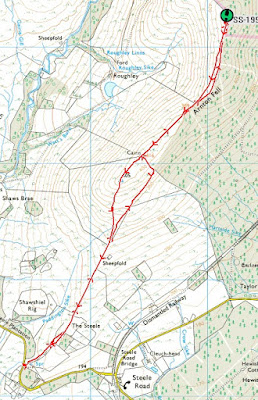 I was on a walking holiday with Ryedale Walking Group staying at Chollerford, near Hexham in early October 2015. I chose to take one day out for SOTA and skipped breakfast early morning on the Saturday, to drive up the road that runs beside Kielder Reservoir and on into the Scottish Borders Region.  I reached Newcastleton at 0745 am and found the Spar shop there had a Kenco coffee-to-go machine. A cappucino and a Crunchie was my breakfast....

Two summits could be comfortably accommodated in early October with the reducing daylight - so from the Spar in Newcastleton I turned the car round and drove to the parking place (NY 514932) near Steele Road for Blackwood Fell SS-199. This summit had previously been activated just ten times.

On my way up, via Arnton Fell I avoided the trig point, which is not within the activation zone. I passed it on my way back down as you can see from my map (click to enlarge). This was a steady walk, taking 52 minutes to reach the top, with just one steep section going up to the cairn which is indicated on the map. There were no awkward fences to climb, but it was a little boggy in places between the cairn and the highest point. From past experience it has proved difficult to qualify the more remote summits in the Scottish Borders using FM on the 2m band, so today I was carrying my Yaesu FT-817 and a 3.3 Amp LiPo battery which is now 9 years old and still works well.

Only 15 stations were worked on 40m and 30m - exclusively on CW. I did not have a cellular signal to self spot and my final CQ calls failed to attract any takers on 14062 KHz so I shut down after 26 minutes air time, and made my way to Roan Fell GM/SS-132.

I weighed up my options of what to do next and did consider activating two summits together - this would have been SS-114 Greatmoor Hill and then continuing on to SS-106 Cauldcleuch Head. If I went for these two though it would mean I would have a late return to Chollerford - sometime after 7.00 pm I estimated, so instead I went for the singleton Roan Fell which was across the C Class road from these two summits.  I'll bag those two on another another day. Roan Fell had previously been activated by 8 stations.

It took around half an hour to reach Twislehope where I was to park under some trees between the two farmhouses (NY 447962) at 231m ASL. I wasn't sure of my route - it was reported by Richard G3CWI that he had cycled up to Hartsgarth Fell gate in 2007. The route I took on foot was over the ford. I left the track here though and climbed up over Carlingtooth Rig. From there it was a little tussocky until I reached the track at 453943, but not too bad of a walk. When I reached Hartsgarth Fell gate it became apparent that the shooters track had been laid right over the top of Roan Fell. I climbed the locked gate and very soon reached the highest point of Roan Fell on the track for my activation which was on the 20m, 30m and 40m ham bands. The walk took exactly one hour.

Conditions were better than they were earlier on SS-199 and I was able to self spot my activation on SOTAWatch using the Rucksack Radio Tool app. I made 26 QSOs in 45 minutes with the best DX being with Bob AC1Z in New Hampshire USA and Phil VE1WT in Nova Scotia Canada.

With time to spare I decided to take a different route back down, once I reached the gate at Hartsgarth Fell.  I took the grassy ridge between Carlintooth Rig and Cockplay Hill down to an interesting place where three watercourses came together (444950). Like my route up there was no path to follow but it wasn't too bad. I soon reached the sheepfold and made my way back to the car after an enjoyable 2nd activation - and I hadn't seen a soul all day.
Posted by Phil G4OBK at 23:59