The highest point of Muncaster Fell

Its 2017 and I have a little more free time now after my house move last last year - so I'm starting up Catterblog again....

Readers will know I enjoy walking and in particular climbing to the tops of hills and mountains with amateur radio equipment, setting it up, erecting an aerial and then making contacts as a part of the ham radio hobby. It's called Summits On The Air (SOTA) .

SOTA is worldwide now, and the scheme was started in England in 2002. I first got involved in it in 2005.

Each country has its own association and a manual which sets out the rules. In the UK the Marilyn Hill List is used to determine where the summits are. Hills are included in the list if they have 150 metre prominence above surrounding ground. In England there are currently 175 hills listed. There were 176 early last year until felltop assessors (known by some as "The Meddlers") determined that Swyre Head in Dorset had a prominence of 148.3 metres so it was removed from the list. Later in 2016 felltop assessors using sophisticated GPS equipment determined that the previously listed location at the trig point on Muncaster Fell / Hooker Crag near Ravenglass, was not the highest point. A new higher location was determined 500m north east of the trig point beyond Hooker Moss. See map showing the old and new locations: 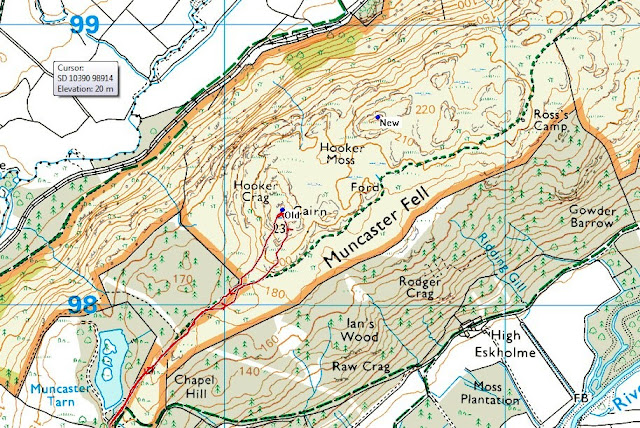 The difference in height between the old and new Marilyn summit is just 700mm, yes, just 700 millimetres, with Muncaster Fell / Hooker Crag topping out at 231.4m and the real Muncaster Fell (without trig point) topping out at 232.1m. As there is a drop of more than 25m between the two points the new summit is the one which now counts for SOTA with effect from the 2nd March 2017.

As I had climbed all 175 Marilyn Summits in England for SOTA (or had until this summit moved) I have now climbed 174, so I need to revisit Muncaster Fell and make some ham radio contacts from the new location to have climbed and operated from every English Marilyn summit.

My good friend and fell bagger chum Geoff Fielding (M0PYG) who lives in Herefordshire, was the last ham radio operator to make valid contacts from the old top. He was on the summit that day with another fell bagger friend of mine, Nick Langmead (G4OOE) from Scarborough. 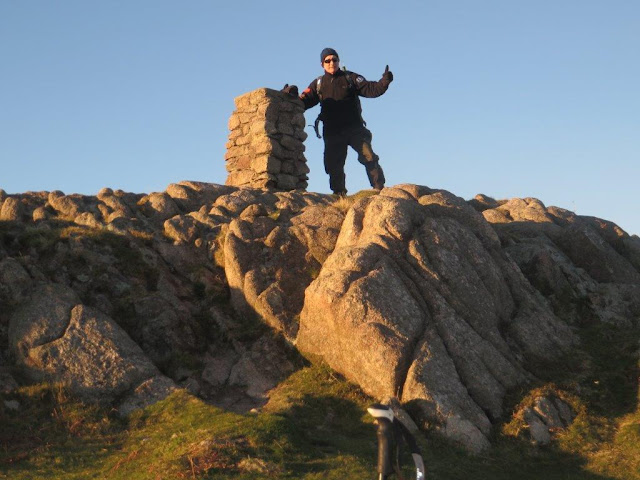 Thanks to Michael Graham who shot this photo showing the position of the new summit, the highest point of Muncaster Fell, which overlooks the Ravenglass & Eskdale Railway:

So I need to head over to Ravenglass anytime soon and activate the new summit for SOTA, which has been given the reference G/LD-059.  Hopefully someone else will also visit and I will make a contact with the fell as a chaser from my radio shack in Pickering.

Post script 6th March 2017: The new top was successfully activated for SOTA on 7 MHz and 145 MHz by Michael Warrington G0HIO/P.