The two summits EA6/MA-046 and EA6/MA-057 lie between the town of Port de Pollenca and the village of Cala de San Vicenc on the north east coast of Mallorca. Between these two places there is a walking route called the Siller Pass. Access to MA-057 can be gained from this pass. It is unclear if access can be gained to MA-046 from the pass as I climbed it from the housing area north of Siller.

These two summits were activated on separate days, however for someone with reasonable fitness and agility both summits could be activated in the same day. A degree of scrambling and surefootedness is required on MA-046, and to a slightly lesser degree, on MA-057.

I activated this summit for the first time on the afternoon of April 25th 2015. It was activated soon after that by Adrian, EA6/MM0DHY on May 11th 2015. Unfortunately the stations who made contact with EA6/MM0DHY that day did not spot Adrian's activation and I was denied the opportunity of an easy SOTA Complete! In fact Adrian was QRV on that occasion for 30 minutes on 20m CW and I was in the shack at the time but not listening to 14062 KHz... enough moaning about the "none-spotters".... (We know who you are thanks to the open log system employed in the SOTA Database which is run by Andy MM0FMF)... so on to the report of my activation...
After enjoying a walk from Port de Pollenca to Cala San Vicenc, where our walking group had a leisurely lunch, I returned with the group via the Siller Pass. At that time the nearby summit of MA-057 Serra de la Punta, was being activated by Nick G4OOE and Dave G3TQQ and I was able to make QSOs with them on 2m whilst on the path coming back from Cala San Vicenc.

From here a path leads through thick bushes for 50m and then goes on to reach a clearer, gradually rising rocky climb. The ascent from that point to the summit took me exactly 72 minutes. I had to back track once when I reached a precipice to my right which was unassailable.  A friend from the walking group, Steve (non-radio ham), was celebrating his 63rd birthday and expressed an interest in coming with me up to the summit. Here is Steve on the early part of the climb: 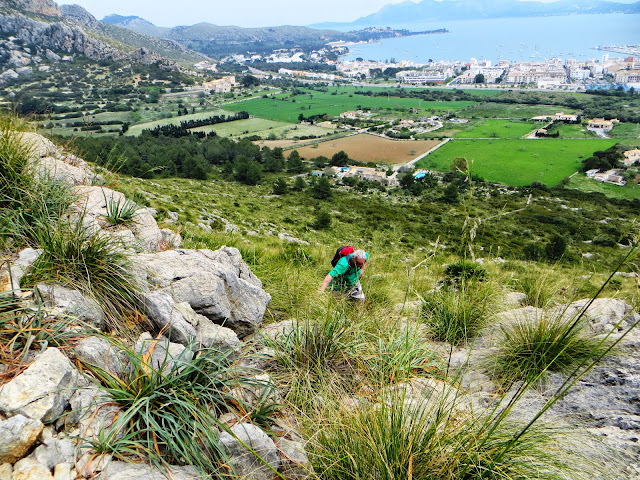 There were few landmarks to record on this climb, it was just a case of picking ones way from rock to rock following the easiest contour - which I found quite challenging and enjoyable. Just prior to the final scramble I came across these large red hearts painted on rock and also the green painted tortoise like rock just above the red hearts only a few metres below the summit, also pictured below: 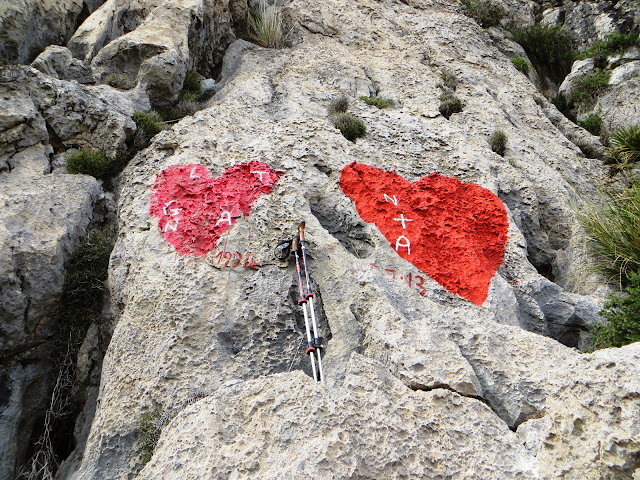 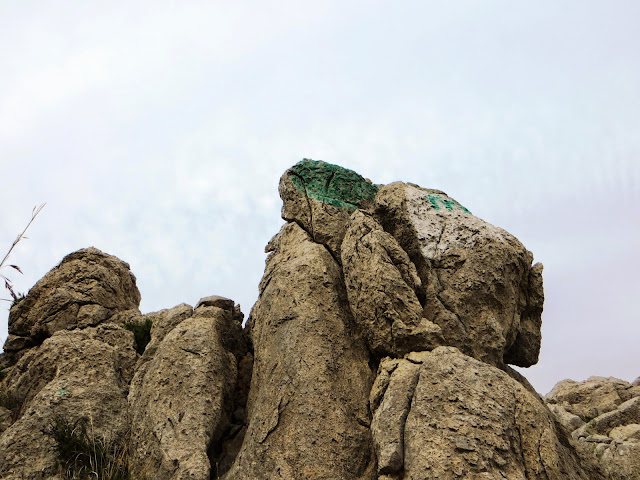 A minute after taking the photo of the tortoise rock I was on the summit, finding a convenient place to set up my QRP station.

I didn't have much time to spare as our walking group had a meal booked in a restaurant in Port de Pollenca at 1715z to celebrate my friend Steve's birthday, so I only had time to operate on the 20m band in CW/SSB, and of course on 2m FM, where I returned the favour to G4OOE and G3TQQ (who were then coming down from EA6/MA-057) by giving them a QSO with MA-046. I managed to complete one contact per minute on average, with 36 QSOs in 37 minutes, before closing down at 1501z. 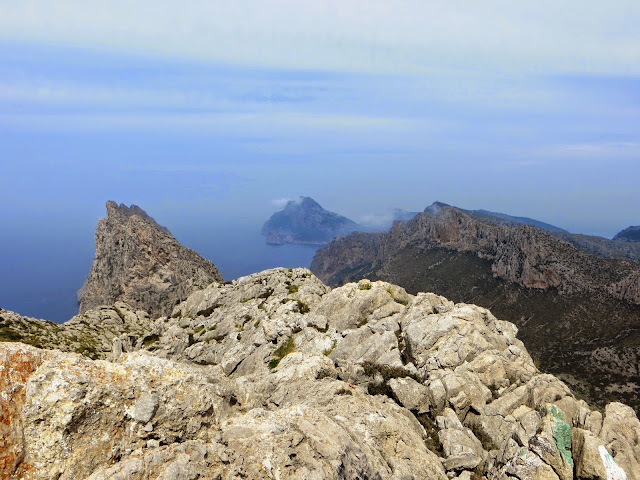 The descent proved easier than I thought it would, and I was back at the tarmac road by the first house in 40 minutes for the stroll back to our hotel in the town.

Three days after my activation of MA-046 I had an early start, driving our hire car as far as I could towards the Siller Pass footpath and parking at a vee in the junction of two tracks at around N 39.54'25.3" E 3.04'14.0" where the track becomes a split private drive. The right of way takes the left hand of the two tracks and soon reaches a metal gate (the Mallorcans like their gates). The route then becomes a rugged footpath until a track is reached. To strike out for MA-057 the track is left behind at a building on the right, which I believe is owned by the local water board, I turned left here (N 39.54'36.2" E 3.03'52.5") to start the climb proper to the summit: 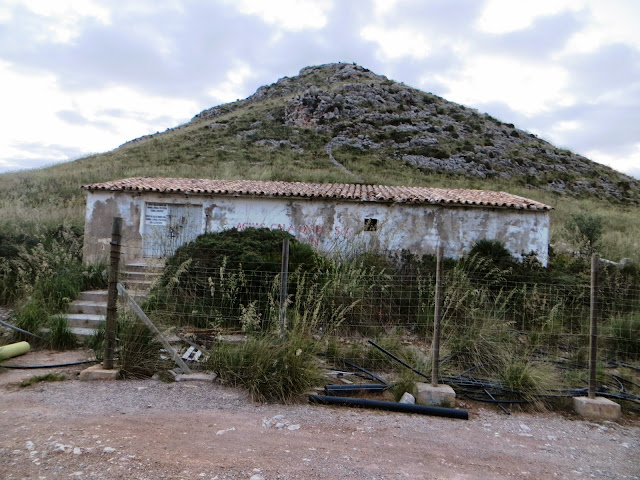 Looking for landmarks, there were few, however I did encounter this water point for the goats who abound in this rugged terrain:

From the building to the top was quite a scramble and it took me 35 minutes to arrive at the summit cairn after leaving the track at the building pictured above.

After taking a few pictures from the summit I made my way back to the hotel in Port de Pollenca in time for a well deserved cooked breakfast, before leading members of the walking group on a walk over the summit of Fumat MA-048 on the nearby Formentor Peninsular.