After returning from the activation of Fumat MA-048 and having breakfast, Dave G3TQQ and I took the hire car back on to the Formentor peninsular to drive to a point beyond the Formentor Hotel. We parked near the end of the road at N39.55'27.32 E3.09'07.6".

After leaving the MA-2210 we were a little confused as the road appeared to pass through large gateposts into a secure area. The road was serving the Formentor Hotel. We went this way without a problem, but discovered a less forbidding way back using a back road to the north of this road to the hotel. If you go this way I suggest taking a left fork not far after leaving the main MA-2210 road on the corner.

I kept driving (tarmac road) until I could go no further and parked in the widest part of the road about 100m before there was a chain across the road. From here we climbed a bank to find a path which was well marked with small cairns every so far, right to the summit of MA-050 Na Blanca. We ignored the Pivado sign at the start of the path as did the other hikers we witnessed taking the same route during the morning...

The cairns made route finding easy and we reached the summit in 55 minutes. Here is the route shown on David Brawn's Northern Mallorca Tour & Trail Map - a GPX trace can be downloaded from the SOTA Mapping Project: 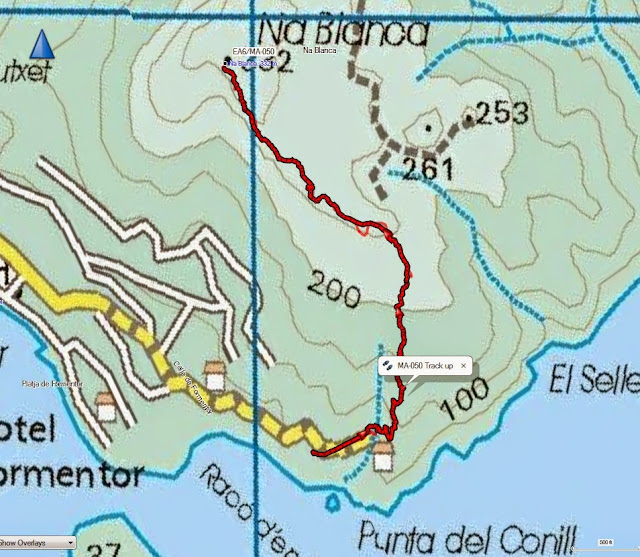 This was an excellent well marked out walk, indeed, one of the best of our holiday, yet it was not featured in any walk book we had. One station was set up just off the summit using a thick stalk from a dead shrub to support the pole.

As this was a first time activation I allowed Dave G3TQQ the opportunity to be the first to claim it, which he did with a QSO with Don G0RQL. Between us we completed 56 contacts in less than an hour on the 20m band including several summit to summit contacts: Log2map by ON6ZQ

After our activation we went back to Port de Pollenca for our lunch in a beach bar with the ladies, before heading off for our afternoon activation of MA-066 Puig se San Marti.
Posted by Phil G4OBK at 21:00