With my two friends Geoff Fielding 2E0NON and Dave Bottomley G3TQQ I have just enjoyed three good days walking near Arrochar in the Loch Lomond and Trossachs National Park, Scotland.

I booked our holiday through the Scottish firm Lochs & Glens Coach Holidays. For around the cost of the fuel to get there and travel about in a 4X4 vehicle we were transported in luxury and had 4 nights half board in a hotel of a satisfactory standard... These winter coach holidays are so cheap for folk living up north. Lochs & Glens and Shearings make their money over the bar in the hotel, that must be why they do the holidays for such a cheap price...

Lochs & Glens own 7 hotels in Scotland and around 30 luxury coaches. Our party (of mostly retired folk) was picked up from six locations in North Yorkshire on Monday, and we returned home on Friday. We got on the coach in York and we have to thank Terry G0VWP for taking us to meet the coach with our bags. When we reached the hotel we found another two coachloads of folk were also spending a holiday there, the hotel was quite full.

On Day One we activated SS-218 Cruach Tairbeirt, a small hill to the rear of the Loch Long Hotel where we were staying. 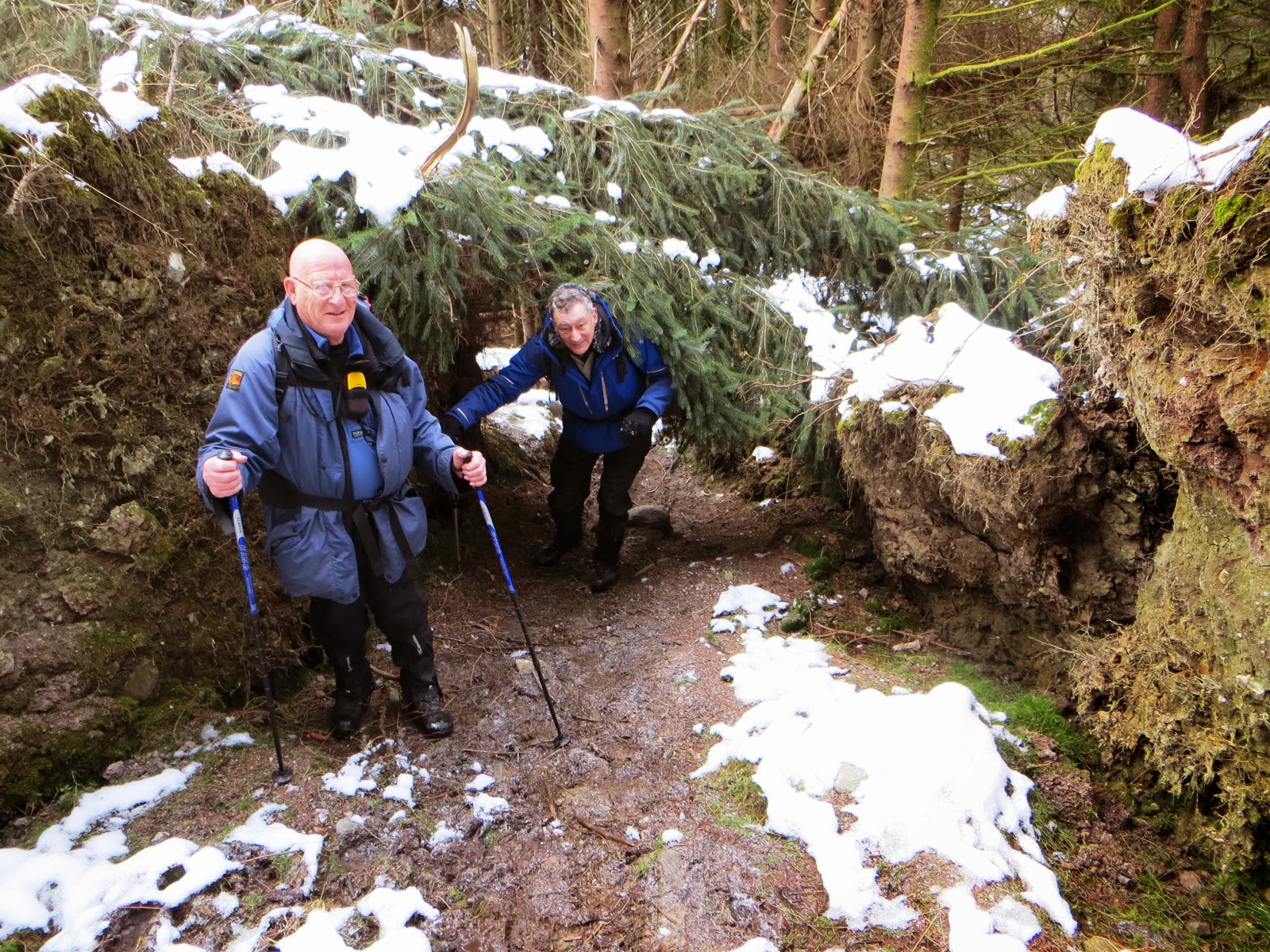 Our ascent and descent was impeded by fallen trees, such as this one above but we found our way around them. One of the trees was useful though - this self seeded tree in the activation zone supported my antenna pole: 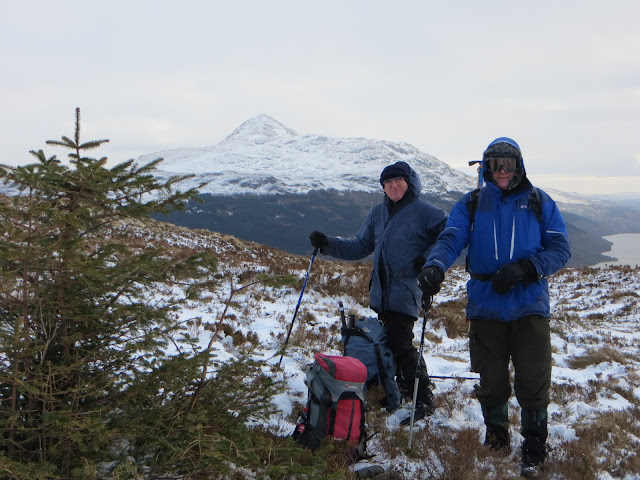 On Day Two of Three we were in need of transport to take us up Glen Douglas. This would allow us to complete a linear walk back to our hotel via two summits. There are no taxis in the area at all, so we found our man, who was called Ofer - he was the Entertainments Manager (He called the bingo numbers one night!) and we made Ofer an offer he couldn't refuse. £20 to take us the 10 miles to Glen Douglas at 8.45am the next morning - and he obliged.

Very patchy snow on the ascent of SS-081 Beinn Bhreac: 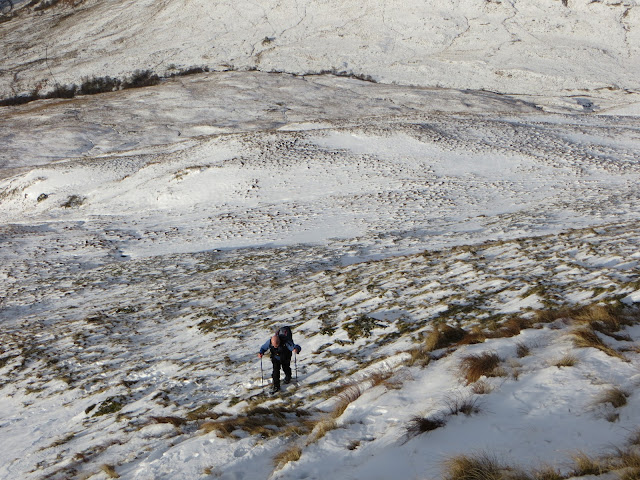 As we we were about to depart SS-081 a couple of walkers turned up and kindly took our photo. Nick G4OOE referred to us as "The Three Amigo's" in an e-mail that night, and that made us laugh... 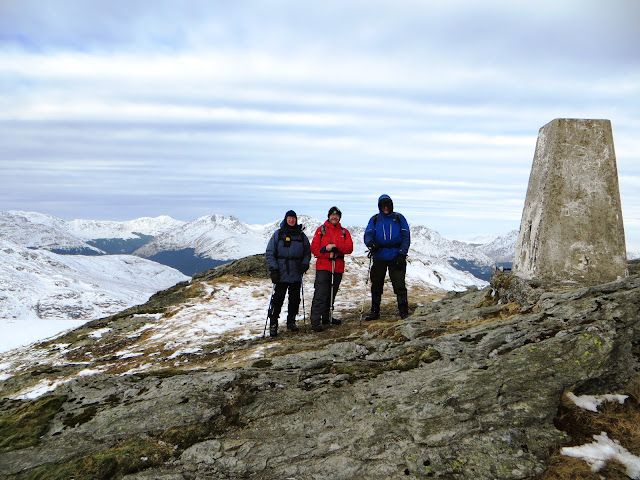 We headed downhill to a frozen depression and then ascended around 100m again to a col shown on the map as An t-Sreang at NN 302015 (359m). From there we turned left and tracked our way around wind slab snow and softer drifts to make our way to the top of the 2nd summit which was SS-103 Tullich Hill (632m). We just did it without needing to don our crampons...it was a close run thing.

This is a picture of the pointed north easterly flank of Tulloch Hill SS-103 which I captured from SS-218 the previous day: 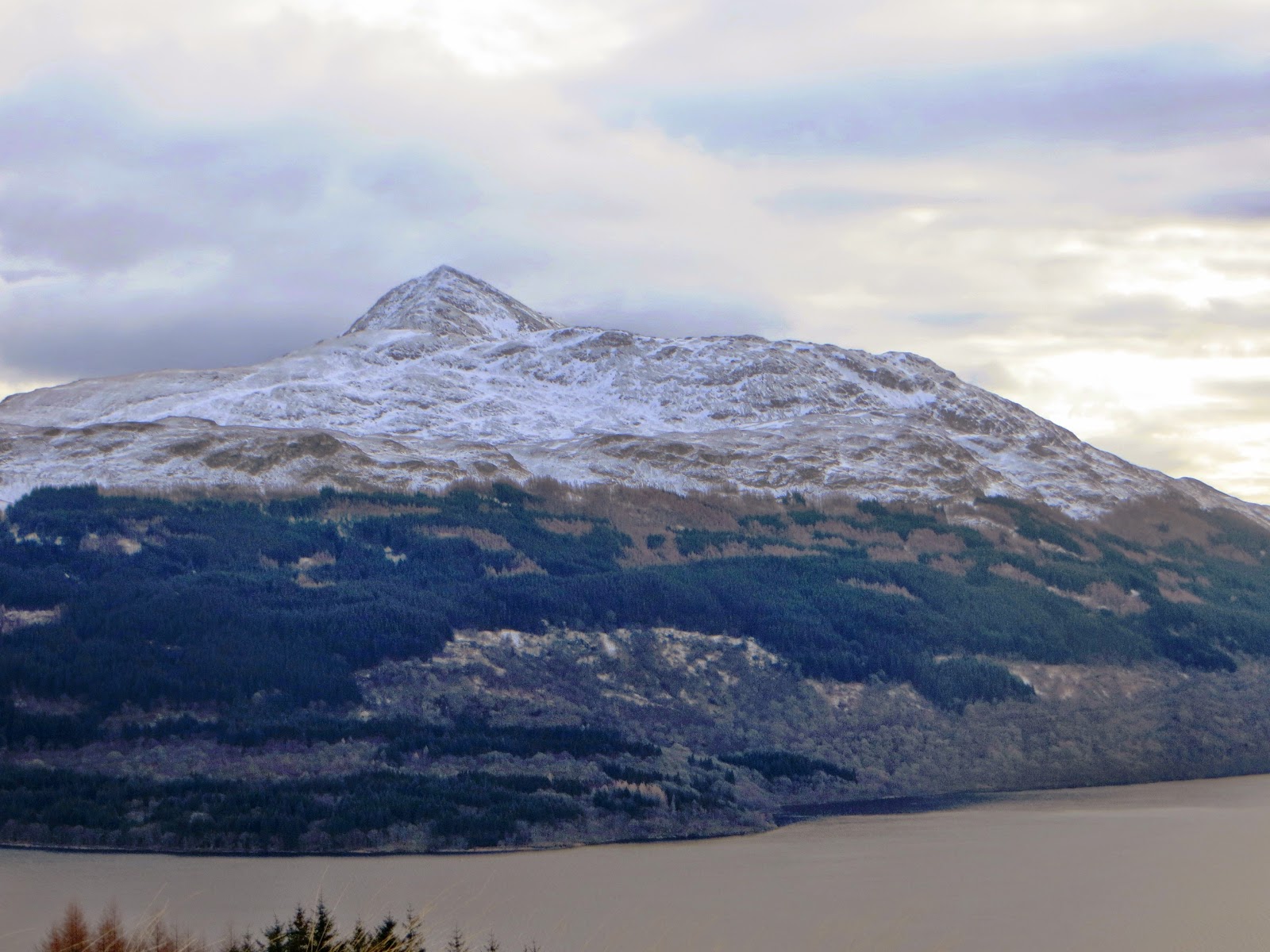 Picture below shows recent Septuagenarian Geoff 2(M)0NON front and Dave G(M)3TQQ (who is not far off being one) behind, climbing to reach the top of Tulloch Hill SS-103. 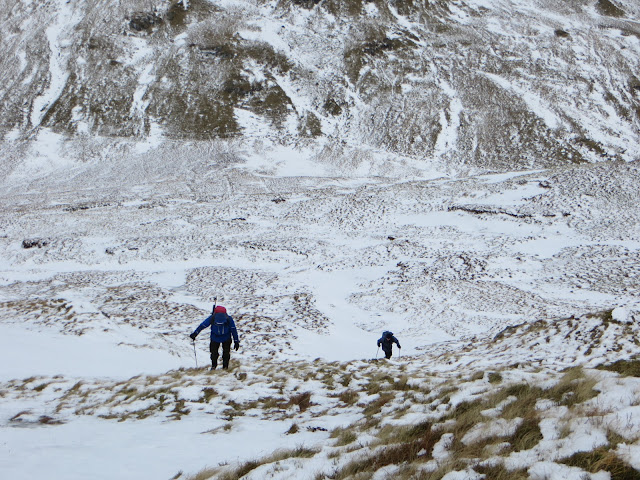 We were cold and miserable sat on a drift out of the wind on Tulloch Hill, thankful for the 25m height rule but we didn't want to linger for long. I was happy just to take 13 quick CW QSOs and 2 in SSB on 40m in 15 minutes before passing the microphone to Dave and Geoff to finish until the stations calling dried up. and allow us to get back down before dark.


We left the top at 1445z and were in Ben Arthur's Bothy Bar in Arrochar for much needed food and drink at 1730z. This had been a satisfying day, which added up to an 8 mile walk with 3400 feet of ascent on difficult ground for 10 SOTA points apiece.

It became apparent during the activations that my FT-857 appeared to need attention. On SSB it was reported the TX was drifting and apparently I was working split to some extent by hundreds of hertz with distorted audio.... we thought it may have been low battery voltage but that was not the case... tests needed when we get home but it looks like the radio will have to go down to Yaesu for a refurb....these radio's aren't meant to take the abuse they suffer in a rucksack on the hills...the radio has had a hard life.

Our driver "Don't call me driver, my name is Michael" was taking our tour bus to a museum and Glasgow City centre on day three, so I approached Michael to see if he could oblige us by dropping us off in Luss. He said he could, and not only that he could collect us on the way back if we were waiting in Luss at around 4.30pm.

These coach tours are so regimented, almost like a military exercise in all respects, including meal times at the hotel, and the posting of notices on a board to clearly explain the day to day arrangements. It all runs like a well oiled machine...

Once on the coach there was much laughter from the other guests, when someone shouted "Have you got your crampons?"

From the car park in Luss village we crossed the main A82, (the road beside Loch Lomond) via the footbridge, to join the well used path (as it turned out) up to SS-090 Beinn Dubh (657m for 2+3 WB points and a Complete for me). My friend Iain MM3WJZ had given me some guidance on this summit - not to be caught out (thanks Iain). The summit marked on the map as Beinn Dubh is 642m high. The actual summit however is across a long plateau 2 Km to the north west. It is unmarked and is 657m high. In between there is a depression in the path which falls to 595m. In a straight line path from the marked summit to the actual top though the land falls to less than 500m. The hillbagging.co.uk website make it a little more understandable - they call the summit Mid Hill (Beinn Dubh). Mid Hill is the closest named high point to the actual top on the OS 25K map.

We had the most beautiful day for our walk, full sun most of the time and no wind. Here is Dave G3TQQ coming up, with Loch Lomond and all its Islands as a backdrop: 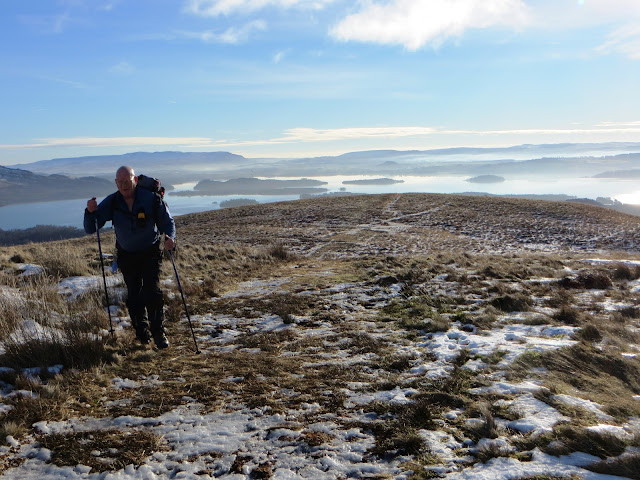 Dave started activating SOTA this winter and lives close to me in Pickering. He's got the SOTA Fever now, and there is at least one other ham in the area where I live also who is becoming addicted....

There were plenty of folk about,even though it was mid week and not school holidays - it was very safe with just a few patches of snow to cross on our way to the top. The walkers we encountered were all local Scots, and friendly too, stopping for a chat as you can see in this picture: 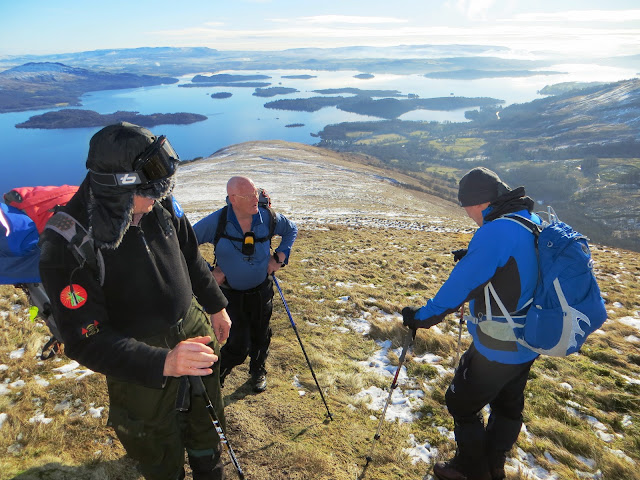 I set up the station at the second of the two small cairns. Dave and Geoff went off with a handheld and quarter whip to qualify the summit, leaving me to do the business on HF in its entirety on 40m, 30m and 20m with 72 QSOs worked in an hour "contest style" in very comfortable conditions, for a change.

After working another Activator / Chaser, who was USA station Bob AC1Z on 20m CW at 1330z I went QRT and ate my lunch before packing up.

We could have made this a circular walk by crossing Mid Hill and then meeting the road in Glen Luss to walk back to the village in the shade, but that would have been cold and without a view, so we decided to return the same way down in full sun, and it was most enjoyable.

Loch Lomond on the descent: 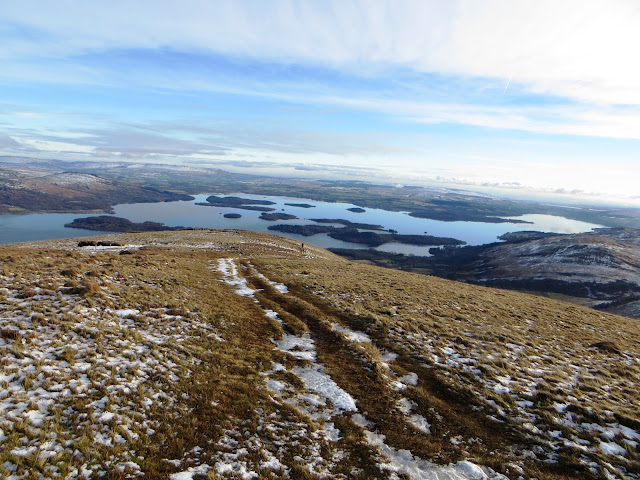 Back in Luss we called in for refreshments at the Village Rest Cafe and Bistro which stays open until 4.00pm in winter. One of us downed two pints of draught Guinness... the other two had a pot of tea and Caramel and Apple Pie with Cream each...delicious!


Lochs and Glens picked us up from the main car park at 4.40pm to round off what had been a most enjoyable three days walking in the Loch Lomond and Trossachs National Park.

We were returned by coach in fine style to York on Friday afternoon, leaving Arrochar at 0745am with stops at Moffat, Leeming Bar, Ripon and Harrogate en-route. The whole tour, including transport, breakfast and dinner over 4 nights cost us just £140 each..... amazing value for money, I don't know how they do it at the price....

A final comment about the dodgy audio and instability coming out of my FT-857 - after running some tests today with Terry G0VWP the problem is down to battery voltage. The radio is around five years old now and only recently it has proved unstable when the battery voltage drops to less than 11v. So long as I can maintain 11.5v and up the radio is stable and the audio is good. A proper 12v - 14.4v 7.5 AH LiFEPo4 battery has been obtained - a preferred cure I feel to sending the radio back to Yaesu UK for realignment, which may not cure my problem anyway.
Posted by Phil G4OBK at 00:22