An opportunity arose to stay with my friend Geoff 2E0NON, who lives in near Malvern who was celebrating a "milestone birthday". The party was much enjoyed and the following day we set off for South Wales on a 4 day SOTA Tour, hoping to visit on average, 4 summits each day. The only way this could be accomplished was by spending no more than around 20 minutes on each summit - as a result we were carrying a VHF 2m Yaesu FT-1500M Transceiver running 40 watts to a vertical dipole antenna mounted on a 5m pole. As a backup we were also carrying a Yaesu FT-817 and a link dipole for the HF bands. In the event on all 16 summits visited we did not need to deploy the HF gear as sufficient contacts were made on VHF to qualify all summits.

We started with the highest summit in South Wales, and after leaving Geoff's house in Malvern at 6.00am we were setting out for Pen y Fan at first light on January 20th. There was frozen lying snow on a path that was very well walked. There were very few walkers as we were so early, however on our way back down we found out that the walk up to Pen y Fan was very popular indeed. Maldwyn GW6OVD, (who lives in South Wales) was also planning to activate the summit later that morning.

As we climbed we mistook the summit of Corn Du to be Pen y Fan. It is more prominent and is 873m high, whereas Pen y Fan is 886m. There is significantly more than 25m drop between the two summits though, so we continued on to the highest point where there is a marker stone.

We reached the summit at 9.30am and operated for just 20 minutes completing 14 contacts with stations in England and Wales. My first contact at 0938z was with Mal GW6OVD/P on the nearby summit of Fan Fawr SW-005, a summit we intended to visit a few hours later.

As we packed our equipment away the wind was getting up and blowing the snow everywhere - it wasn't pleasant and we got off the mountain as quick as we could. As we descended we realised how popular the climb was as tens of people were heading up to the summit. When we reached the car park we met Mal GW6OVD, who was just setting off, having given us the earlier summit to summit contact, which was to be repeated the other way round later when we arrived on Fan Fawr.

After a cup of tea from the van in the lay-by below Pen y Fan we drove about 1 Km to park opposite the Storey Arms public House. It was an arduous walk to reach the summit - Mal had warned us of some deep snow drifting in places, so we picked our way up through the blowing snow, almost turning back at one point.

It took almost one hour to reach the summit (734m) and from there we made 11 contacts, and again worked with Mal GW6OVD/P summit to summit who was on Pen y Fan. Regular chaser Andy G8MIA in Rugeley was logged. He was probably our best DX:

We packed up as quick as we could and left the summit...

6 Km west of Fan Fawr is SW-007 Fan Nedd but to reach the parking place close to it by car involves a drive of 22 Kms. We parked roadside near to the Maen Llia standing stone on the road between Ystradfellte and Heol Senni.  After advice from Allan GW4VPX the parking place was approached from the south as the road coming from the north is much steeper and is notoriously icy in the winter as it is does not get gritted by the local council.

Now walking we followed a broken wall for 300m before crossing it to make for the summit. It took us 45 minutes to reach the top in lying snow, but it was a much easier passage than the climb up to Fan Fawr.


The conditions sat in the snow with minimal visibility were dire. We completed 5 contacts in 5 minutes and for our own sakes quickly left the summit. Best DX was with Don G0RQL in Holsworthy, Devon.

We were staying in a hotel at Abergavenny that night, fortunately there was two large radiators in the room on which to dry our kit.

Logbook of the days 29 contacts: 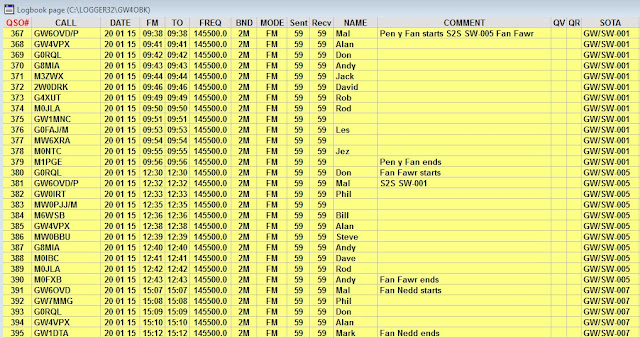