After breakfast we bought some Ginsters pasties from the Spar shop in Porthcawl for our lunch, before heading out of town by 8.30am. We planned to activate at least five easy summits today as most were very easy to reach. This wasn't the case with SW-021 though, our sixth summit, which involved quite a trek.

We thought we might have a reception committee when we arrived at our first summit - as we approached we saw two cars and two fellow hams. This was Allan GW4VPX and Emir MW6EWM:

After a natter we set off across some rough ground to a ruined building at the highest point of the hill. We set up inside it to shelter from the wind... 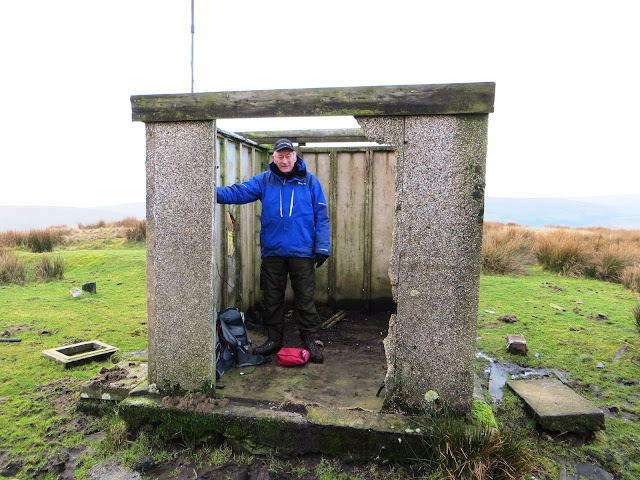 With QSOs logged with Allan and Emyr who we could see at the road about 1 Km away, we called CQ and had contacts with three other stations. Best DX was a contact with Don G0RQL in Devon. Walking back after the short activation we bid farewell to Allan and Emyr and set off to SW-028.

A road runs right across the top of the summit here. We parked up and walked back to this road sign where we set up our station. As we were operating a council worker passed by picking up litter... 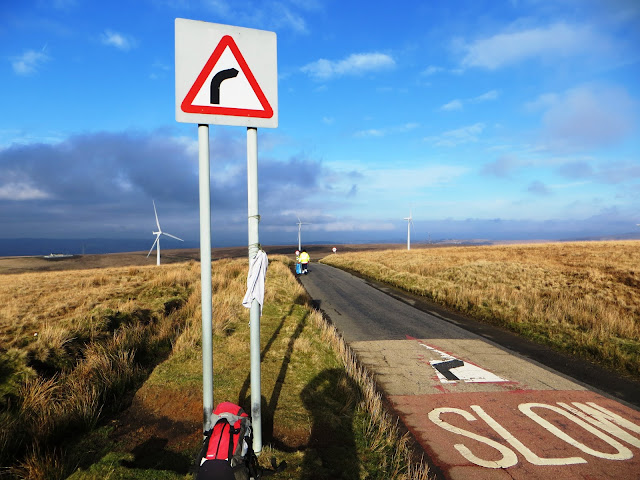 We worked Alan and Emyr again - they were now /Mobile on their way home, and also G0RQL and GW7MMG (only) to qualify the summit before departing. 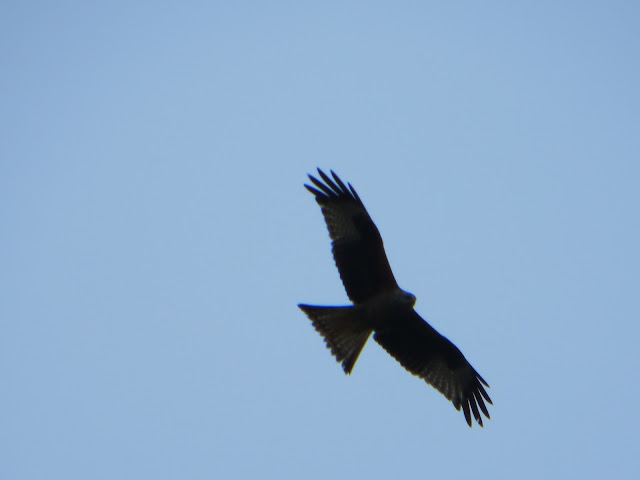 The first thing we saw when we parked at the end of the track for SW-036 was this Red Kite circling overhead...

This was almost a "drive on" summit - after just 200m along a public footpath you are at the trig point. The parking place is comfortably within the 25m activation zone, but we chose to operate from the trig point.  There were some commercial radio masts nearby but there was no interference on 2m FM.
From Mynydd Sylen we made our first summit to summit contact of the day with Pete, GW4ISJ who was on a summit we visited the previous day - SW-012 Coity Mountain.  The nearest village to Mynydd Sylen is Llannon.

After driving through the village of Pontyberem just 20 minutes after leaving SW-036 we were walking the short distance across access land to reach the trig point on SW-039.

It was fun clambering over the rocky outcrop which leads to a burial chamber, but the clambering was unnecessary we realised when we reached the trig point, so on our return we took the easy path below the outcrop. Mynydd Llangyndeyrn is a significant historical site where there is a burial chamber.

Pete GW4ISJ/P was still on Coity Mountain SW-012, so he got two summit to summit contacts for the price of one. We also logged Peter G3TJE/P on Dunkery Beacon SC-001 before leaving.

With two summits left on today's list yet to visit. it was now early afternoon, so after consuming our Ginsters Pasties we retreated back towards our hotel in Nottage, Porthcawl.

North of the industrial town of Neath lies the summit of Mynydd Drumau, which is reached along a track which turns left off the C class road at SS 738998 when coming from the south as we were. The bridleway is tarmac for the most part. Dyffryn Farm looked like it was an ecological power station, burning waste materials.

We continued driving on past Dyffryn Farm to park at the side of the track when it became rather rough at SS 729002. From there it took us 15 minutes to walk up to the trig point... just one easy fence to climb.

After passing through the village of Bryn Coch we turned left up a farm road to reach grid reference SN 756014 where we parked on a right hand bend by a gate. The route had been suggested by someone we knew who had good local knowledge (thanks Mal!), on what is probably the most difficult to access SOTA summit in South Wales.

It took me 48 minutes to walk the 1.75 miles to the trig point which is located in woodland. As I often find on trips like this, by day 3 I become tired and lacking in energy towards the end of the day. I hadn't eaten enough at lunchtime that day and I think that was my problem. It really was a struggle lifting my legs now trying to keep up with Geoff on our way to the summit. He is 8 years my senior!
We entered the woodland at SN 7676 0350 and a clear path led through the forest to the hidden trig point.  Again we found the contacts needed to qualify with six contacts. The five amp LiPo battery I had been using all day ran out on this summit. After running the FT-1500M at full power (40 watts RF output) on the previous five summits, I was most impressed. The spare battery was pressed into service for the last five QSOs of the day.

After consuming an energy bar and some coca cola on the summit I made it back to the car with renewed vigour, and we returned to our hotel in Nottage, Porthcawl for the night. Six more SOTA Completes in the bag.
Posted by Phil G4OBK at 15:31