Another day in the Scottish Borders on our short break in January 2015....it was pretty cool, but dry by the afternoon. We went into Lanark for a look around and a nice lunch in a cafe down a side street. That was after being caught in a heavy shower of sleet.

A pound shop was visited and we bought an extraordinary amount of items for around £14. Arriving back at the hotel by around 2.30pm gave me chance to consider an activation on one of the local hills, so I set off to Black Mount SS-158, six miles from the hotel, for some winter bonus points.

There is room to park at the side of the yellow road shown on the OS Explorer map at NT 074470. 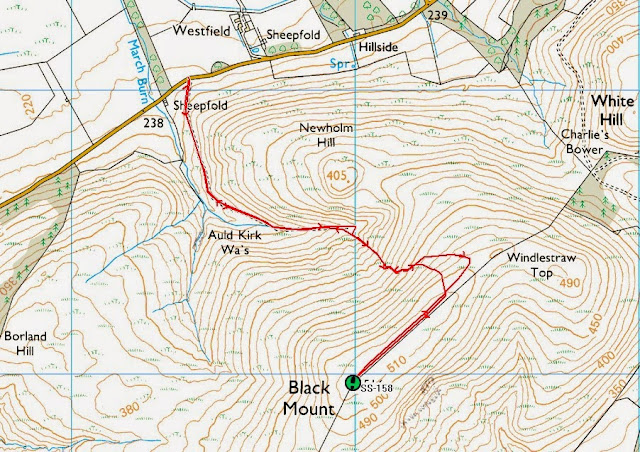 A track led me up a cleft running along the south side of Newholm Hill.  Just as it got a little steeper I struck out to the right on to the rough moorland. Time to reach the summit from the car was 42 minutes up and 24 minutes down. For such a difference in time up and down I guess I found the climb quite a hard one, there is not usually such a marked difference between up and down as I am not a fast descender...

Black Mount has the most eroded trig point I have ever seen. The years have weakened it around the base as you can see from this picture. I arrived just before 3.30pm and a sleet shower from around lunchtime was still lying on the ground. It was cold... 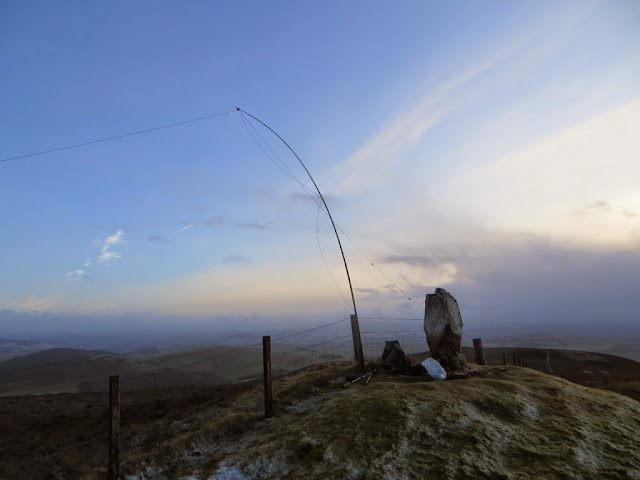 The number of stations calling me on the 40m band (42 in total) kept me going for 40 minutes, with the first contact being Nick G4OOE in Scarborough.

From the summit I was focussing down below me to Broomy Law, GM/SS-209, which I was hoping to activate next, providing I could find my way up to it as it would soon be dark.

It would have been good to try the 20m band out to see if I could work some DX outside of Europe, but as I wanted to garner another SOTA Complete in the day I shut down my station and left the summit just before 4.30pm to go to Brownbank Farm, a place where I believed I could reach Broomy Law from...

It was pitch dark when I arrived in the farmyard of Brownbank Farm near Biggar. I parked adjacent to some cow barns. There was no sign off human life, just the sound of cattle in the barns. I couldn't see the farm house from where I parked. If it had been daylight I would have asked permission to park, however on this occasion I felt that disturbing the farmer when he was probably eating his dinner was unwise. After hanging about for 10 minutes and with no one appearing to establish why I was parked in the yard I locked my car and set off up the well used track to the summit. It was 5.22 pm and I reached the communications compounds on the summit in 20 minutes. 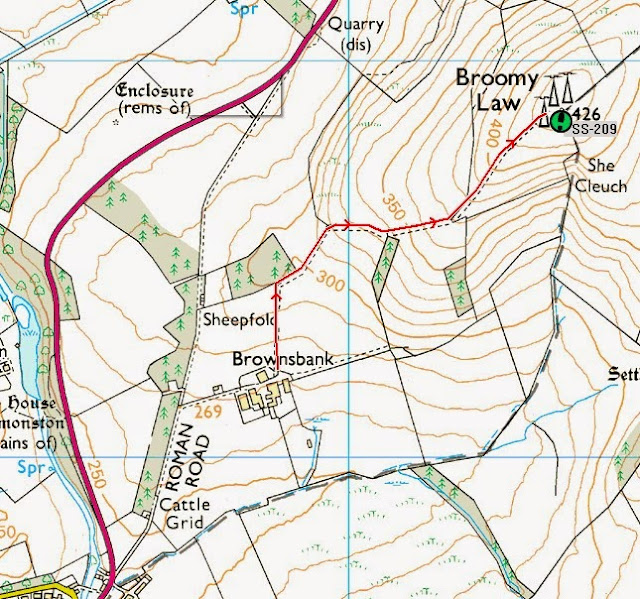 I really struggled to make any contacts on the summit at all - in the end I made 15 and it was my own fault for setting next to a communications cabin to shelter from the bitter wind: 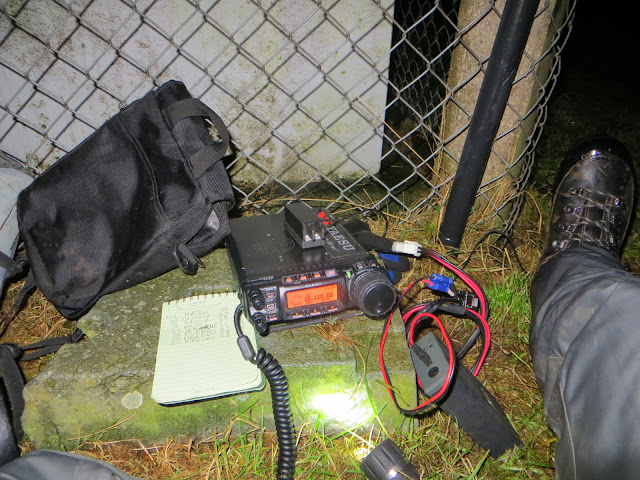 On switching on the radio it reset itself to the "factory default". This meant the keyer was switched off for a start. Then I realised that several of the controls were inoperable. This had happened to me once before when I was operating from a German summit in 2014, with the same transceiver a Yaesu FT-857.

By disconnecting the antenna and altering several menu settings I was able regain control of the radio and transmit on 40m SSB. My self spot using (Rucksack Radio Tool by DL1DLF) raised Rod M0JLA in Hereford followed by Chris ON6ZQ, who I was to meet a few months later on a summit in Belgium. I wasn't able to operate the radio on 20m at all, but I did get the radio to operate in CW and I made some contacts on 40m and 30m. Best DX was with CT9/G8DX who is Jack. Not a SOTA guy but a DX chap I met in 2014 when I was at Ham Radio in Friedrichshafen. I heard Jack calling CQ and called him, so I got my QSO that way. After 20 minutes fiddling around I gave up and shut down. Here is my complete log:

When I got back to the hotel I tried the radio out again and there was no problem, everything worked. The experience told me when possible, to set up away from any other communications installations!
Posted by Phil G4OBK at 17:10