The plan on Day Two of our tour of South Wales summits was to visit four summits and work our way south to the coast where we were booked into a hotel in Porthcawl for two nights half board. The plan was the same throughout the tour - to qualify the summits as quickly as we could on 2m FM and then move on to the next one so as to maximize the number of summits activated on the tour.

GW/SW-012 Coity Mountain lies six miles south west of Abergavenny where we stayed. After breakfast we made our way to Blaenavon to park on an overflow car park for the Big Pit Mining Museum (SO 239086).  Our walk route: 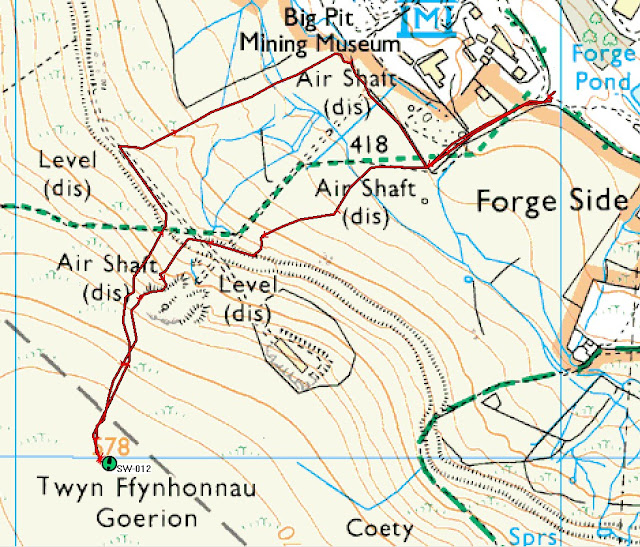 We went up Coity Mountain on rough land but chose an easier way down on a footpath. There was lying snow from where we operated. It was quite featureless on top of the moor. Below us was a large industrial site with the mine near to the Big Pit Museum still working. With five contacts logged in five minutes we packed up and headed for SW-014.

We parked in Nantyglo, (SO 189105) below Roundhouse Farm, from that point on the track leading SW to the summit was rough so we played safe. It took us 42 minutes to reach the top - a walk of just short of 1.5 miles. We went over a hill called Bwlch y Garn, but there was no need to, so when we came back down we skirted that hill on a well used track to the east.  This time we made four contacts in five minutes on the summit and then left. It wasn't comfortable sitting on another snow covered moor - we won't be rushing back to activate these two summits again...

Using the A465 - the Heads of the Valleys Road, we skirted Merthyr Tydfil on what was a mucky day. Visibility was reducing as we climbed up the A4061 to the parking place from which we could walk to Craig y Llyn, undoubtedly our best summit of the day. It would have much better had we been able to see anything. As it was, the mist was too thick and we saw nothing from the summit.

In early 2015 a wind farm was being constructed in woodland at Cefn Glas and we parked in the wide entrance to it at SN 923027:

As you can see from the map of the route taken we walked across the rough ground when we set out. This was quite difficult in deep lying snow so we returned along the road. The early part of the track had been spoiled by off roaders but beyond a ruined structure the way improved. We were using the Coed Morgannwg Way which is a 36 mile walking route which traces ancient Celtic Ways. The highest point was reached by trudging through virgin snow on what was a much more enjoyable walk than the previous two, in 43 minutes.

We operated for fifteen minutes on Craig y Lyn and completed seven contacts. It was after 3.00 pm when we left the parking spot to make our way down towards the coast and our last summit of the day.

Foel Fynyddau was visited on our way to our hotel in Porthcawl. We parked at the end of a Byway at SS 772935. It was approaching 4.00 pm when we left the car and the easy climb to the radio masts on the summit took us just 18 minutes:

We were grateful for the stations who called us, who in some cases were not Summits On The Air enthusiasts but who were happy to see us qualify the summit with the minimum four contacts. On this summit we just made the four needed in less than ten minutes before packing up.

All in all then not a bad day with four more SOTA Completes visited and twenty stations logged: