I finally activated GM/SS-029 Broad Law on HF CW/SSB yesterday with fellow Mountain Goat, Pete Freeman M(M)0HQO, who operated on 2m FM. I had originally planned to go there last September before being struck down with food poisoning when I was staying in the area.  This activation completed the Moffat Hills as a SOTA activator and chaser.

Kenwood TH7 handheld with 30 watt linear - 4.5 Amp LiFe battery
Half wave end fed vertical on 5m travel pole
We left Pickering at 6.00am with me driving, reaching the Megget Stone Cattle Grid on the road above Talla Reservoir before 10.00am. We stopped off for a bacon roll and tea at the Rumblin Tum Cafe in Moffat at 9.15am - recommended. From Moffat we used the A701 road turning off to drive past the substantial Talla Reservoir. Our best view of the day was overlooking Talla Reservoir on the road just one mile from the Megget Stone parking place: 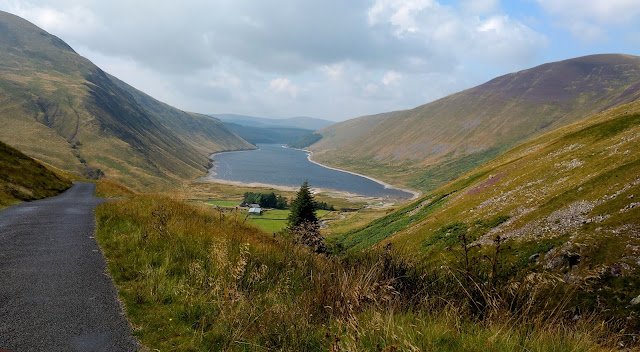 Leaving the car behind at 10:02am I was pleasantly surprised to reach the summit walking at my own pace in 83 minutes, over a distance of 2.4 miles with around 1300 feet ascent.
The walk was quite featureless, tracking the fence to within 50m until we reached the summit.  I  caught a glimpse on my right as I walked, of St Mary's Loch. The climb was not particularly steep in any one place, although it was a little harder climb near the bottom than the top. Start height was at 460m and finish height was at 840m ASL. I set up by the trig point using the centre hole for fixing my pole, and when Pete arrived a few minutes after me he set up his 2m station about 30m to the south, using the fence to fix his pole. 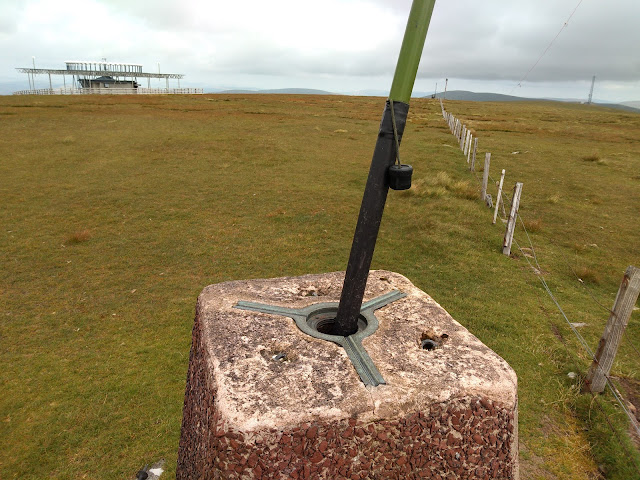 Operating wise I did OK but found fewer callers than I expected on 40m CW, with the chasers drying up there in less than 10 mins. 40m SSB unusually, produced more contacts than on CW - maybe it was due to changing conditions - it is usually the other way round. So I worked 60m, 40m, 30m and 20m before finishing off with 45 contacts in my log. My hands got very cold sending Morse without gloves on. This is due to the blood thinner tablets the doctors say I must now take. Maybe I ought to list my medication along with my equipment list on these reports? What was I on today? It might interest one or two readers:
Edoxaban 60 mg (Blood thinner)
Bisoprolol 5 mg - twice daily (Beta blocker)
Enresto Sacubitril/Valsartan 97/103 mg twice daily (To combat heart failure)
Tamsulosin 400 mg (To facilitate urination)
Ibuprofen 400 mg (To overcome an ankle injury 9 weeks ago)
Pete did very well working English and Scottish stations on 2m FM to complete 11 contacts. As we are both close friends of GI4ONL, Pete came across to my station when I was working Victor on 60m SSB to confirm his 12th contact!
We packed up and walked back down together, meeting a chatty group of four walkers from South Yorkshire and Scotland who told us that they had met up especially to climb Broad Law together and then spend a couple of days in the Moffat Hills.
The drive home was slower than the early morning drive north as we were stopped dead for around 30 minutes on the A66 as the final few gypsy's in their horse drawn caravans were leaving Appelby Horse Fair  to head home, wherever that may have been... We stopped for some fast food at McDonalds, Leeming Bar A1 services and were back in Pickering at 8.00pm, 365 miles driven.
I will be back in Scotland towards the end of next week with my wife to activate some more summits. Broad Law was #929 for SOTA Complete and #940 for SOTA unique. My personal challenge is 1000 Completes and I ain't giving up until I hit my target...
Posted by Phil G4OBK at 23:59