We had been in touch with Jarek SP9MA via text message the previous day and had arranged to meet up on a summit in the morning. What better place to meet an activator in person who you have made many contacts with them than on a summit? After the previous day's early finish due to the rain we wanted to make up for lost time, so we were heading north with the first OK/VY summits near Chotebor, close to our hotel. This was to be our ten summit running order:
VY037>VY-039>PA-036>PA-040>PA-015>PA-041>PA-017>PA-039>PA-038>VY-072 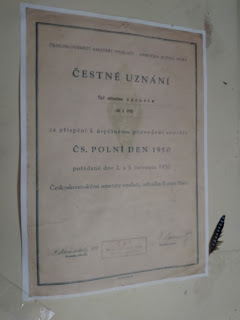 We were looking forward to meeting Jarek, on what was to be an interesting day with fine weather, when we were to stumble across two VHF Contest stations located on VY summits and then go on to complete our first activations in the OK/PA Pardubický region.
When we arrived on VY-037 we found the first contest station - sited in an ex-military portable building, sporting a 20m high mast with an extremely long 2m Yagi antenna. As I operated in the woods around 100m away I could see the antenna turning, so after I closed down on HF I knocked on the door of the unit and introduced myself with the help of my G4OBK QSL card. The station is OK1KCR Club Station Chrudim, and they have been operating contests on VY-037 since 1950 when their licence (pictured) was issued. It was OK1MHV who opened the door - OK1PI was sleeping after completing the night time operating. OK1FCR was the operator and OK1FPL was the old timer in this photo: 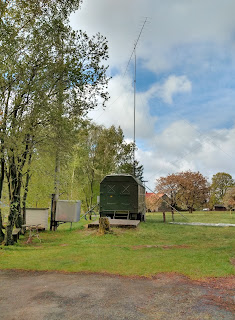 The contest station OK1KCR running QRO on 5th May 2019. The station is on the summit of OK/VY-037 Vestec.
There was another VHF contest club station amazingly on the next summit, VY-039 and one of the operators approached me while I was operating. We had a brief chat, but in different languages brief it was.... My mistake was not taking a photograph.  We then moved on to the summit of OK/PA-036 where Jarek SP9MA/P was waiting for us. We had a nice meeting, did our operating and then left the summit to Jarek to erect his antenna and continue with his own station.
The next summit was OK/PA-040 Ochoz. When we got there we were looking at a similar situation to Hensbarrow Beacon G/DC-008 in Cornwall where a china clay slag heap was built, causing the summit to relocate. In the case of PA-040 this was a large dump, probably around 25m higher than the previous highest point (behind the radio mast in the picture). 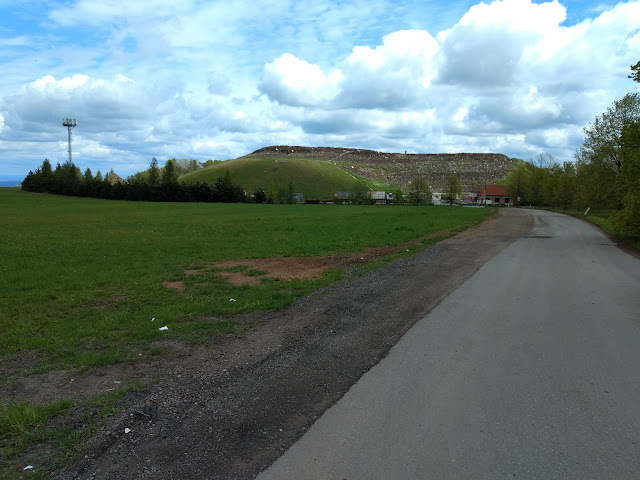 We set up in the activation zone and not on top of the rubbish heap.

OK/PA-015 was next, a drive on summit. We operated on either side of a small copse near to an enormous TV transmitter. The QRN (Static interference) from the sender was very high on HF and I struggled to hear the chasers calling me. Victor suffered the same on 10 MHz on what was a brief activation: 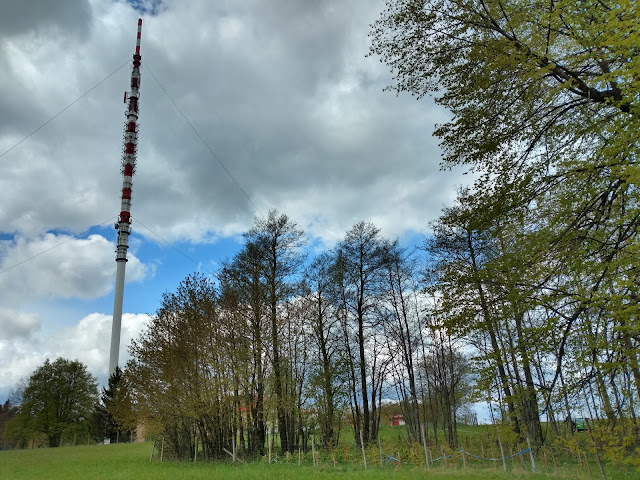 The next few summits were typical of the region in woodland, but OK/PA-039 was nicely in the clear, with far reaching views to a large quarry and as is often the case in Czech, there was a radio mast on the summit: 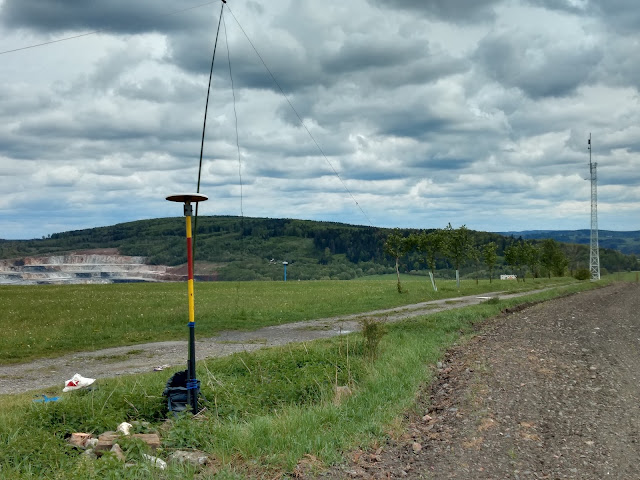 Today's tally was 222 contacts between both operators from 10 summits using 7 MHz CW/SSB and 10 MHz CW. After we left OK/PA-036 Jarek SP9MA went on to make another 12 contacts there. It was great to meet him.