I've been wanting to attempt this Glyders and Tryfan walk now for a couple of years. The walk takes in the four SOTA summits of Elidir Fawr (NW-005), Y Garn (NW-004), Glyder Fawr (NW-003) and Tryfan (NW-006).  I decided to complete this as a linear walk starting with Elidir Fawr and finishing on Tryfan. This is the route I took on Monday 24th July 2017: 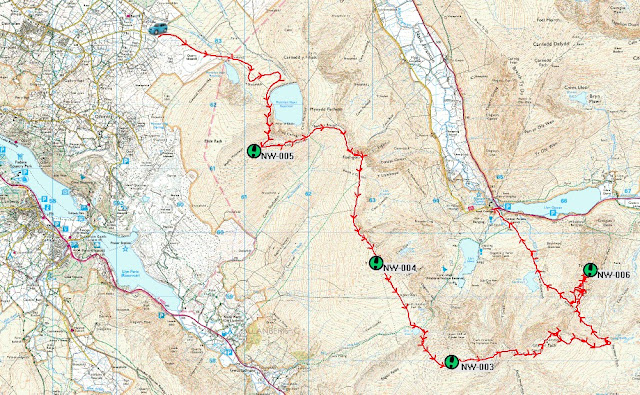 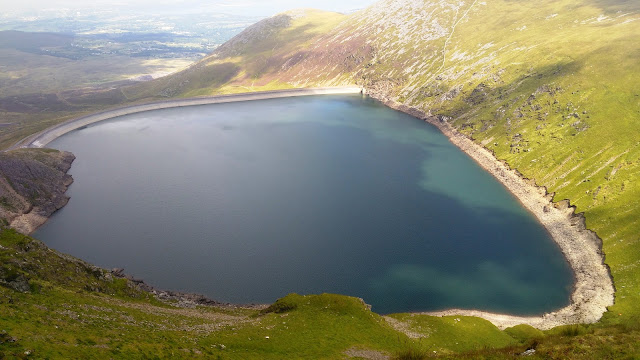 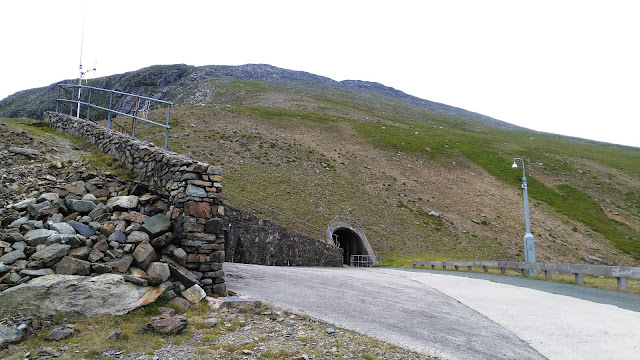 The head of the tarmac road at Marchlyn Mawr Reservoir - now it was a rougher walk to the summit
There were no shortage of contacts on the summit of Elidir Fawr - I was travelling light on account of the challenging nature of the walk. A Yaesu 5 watt handheld and RH770 extended whip was all I used. 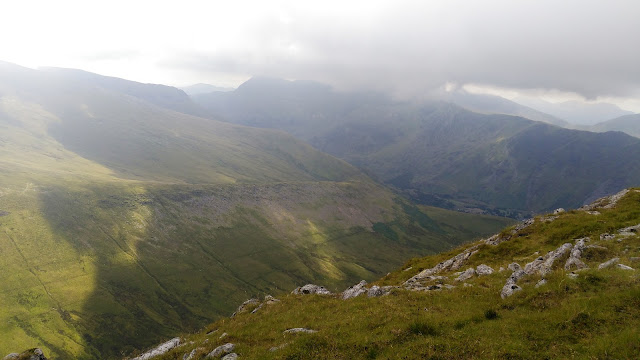 Mist coming in as I left Elidir Fawr

Fine weather on the ascent turned to mist on the summit and this stayed with me on and off for the afternoon until I reached the foot of Tryfan at around 5.30pm.

The walk so far presented no difficulties and this continued as I crossed the Bwlch y Marchlyn and Bwlch y Brecan to climb to Foel-goch. I went to the summit even though it does not count as a Marilyn, lacking the necessary 150m prominence to surrounding mountains. From here the route stretched before me to Y Garn with the mist clearing at that point on the walk. I was on Y Garn (NW-004) at 1.30 pm and enjoyed my lunch before using the radio. 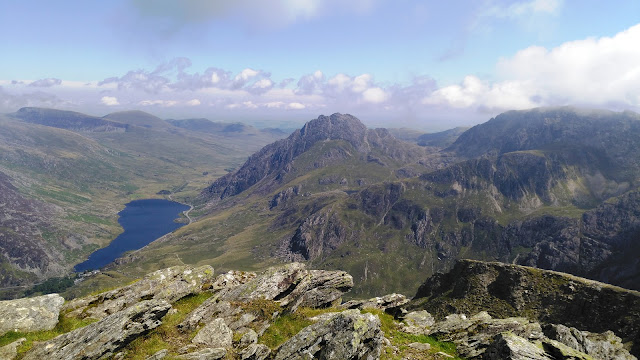 View towards Tryfan from Y Garn - the lake is Llyn Ogwen 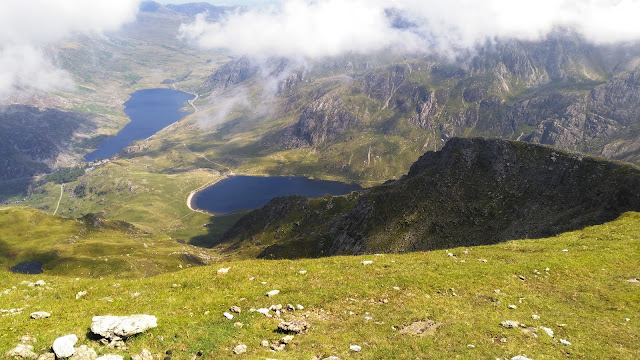 Llyn Idwal from the col above the Devil's Kitchen

It took me 56 minutes from Y Garn to reach the summit of Glyder Fawr, the highest point of my day at 1001m above sea level. The top and its surroundings is certainly rugged as this picture shows: 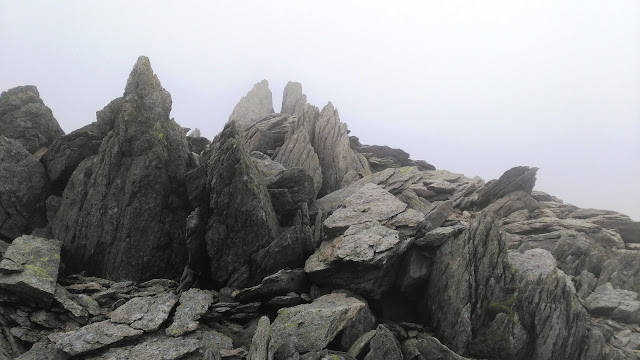 Once again there were plenty of contacts to be had - including more summit to summit contacts with my friends Nick (G4OOE) & Geoff (M0PYG) who were operating from Seat Sandal in the Lake District. I had worked them earlier S2S when they were on Helvellyn.

The mist returned and thick it was. I lost the path walking to Glyder Fach (Non SOTA Mountain) and resorted to jumping from boulder to boulder for some considerable distance - a practice I have to say I enjoy!  I picked up a path again as I approached the top of the infamous scree slope above Bwlch Tryfan. I'd read that slope can be treacherous - in the mist I was not relishing the thought of descending down it, so instead I went east and picked up the easy path leading down to The Miner's Track at SH667582. Whilst wandering around the top of the scree slope I picked up Graham - a walker and retired maths teacher from Salisbury, Wilts, who had heard my poles approaching in the mist, clattering on the boulders. Graham was rather disorientated due to the mist and asked if he could tag along until we were in clearer air. He happened to be going to the same place as me - Idwal Cottage YHA. I make friends easily and this was no exception - we got on like a house on fire for the hour that we spent walking together. Kindred spirits thanks to my GPS!  So it was Tryfan next and here is how it looked from the Miner's Track: 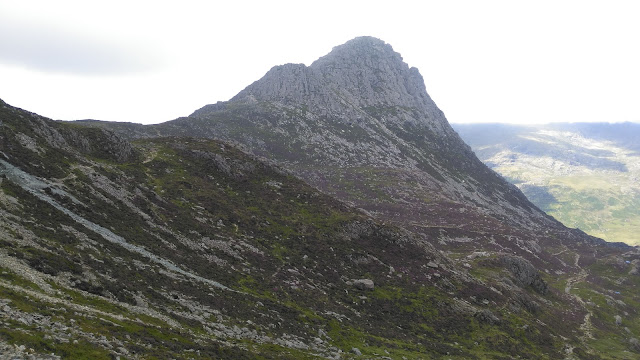 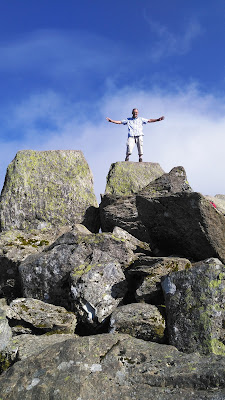 Just after 5.00pm I started the climb up Tryfan (NW-006) by the wall at SH662589, as Graham headed down directly to Idwal Cottage YHA. This was a mistake going up by the wall - I should have walked on for 100m beyond the col and gone up the well used scramble from there - warning! However I continued on a quite tricky and risky climb without safety gear for some distance, before I realised there had to be an easier way up the Far South Peak. I did find the easier line in due course and from then on the scramble presented no difficulty and no risk to me. Needless to say I found the easy way down no problem - you always can!

I was greeted on the summit by a couple who encouraged me to climb one of the Adam and Eve stones (right). I did not have the energy or confidence to jump the "leap of faith" between the stones, and as I was looking forward to a second day of walking in Snowdonia and a longer life, discretion was the better part of valour in this case...

It had taken 30 mins to climb Tryfan from the wall at Bwlch Tryfan and I was really pleased to get there to finish off my 34 point day with four SOTA Completes. Whilst on the summit at 6.00pm and just before leaving, I telephoned the A1 Taxi Company in Bethesda and arranged for a driver to collect me from Idwal Cottage YHA at 7.30pm so that I could retrieve my car from near Deiniolen.  Whilst on the summit an army helicopter had been circling above Llyn Idwal and when I left the summit it decided to have a play on Tryfan itself: 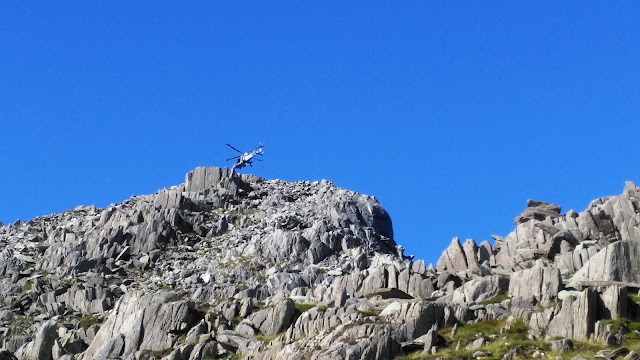 I reached Idwal Cottage YHA at 7.05pm. I checked in as I was staying the night there, however before I could get my meal I needed to retrieve my car from the other side of the Glyders. A local taxi firm was used. When I returned I tucked into a delicious and very large pasta meal, microwaved in the Youth Hostel kitchen, with a lager beer of course... supper was a cuppa with a couple of (recently discovered) Welsh Cakes, delicous.

My GPX track has been loaded into the SOTA Mapping project and Viewranger, however if you do download it to use I would advise you to exercise caution in using it for the section at the base of Tryfan and on the approach to Glyder Fach where I lost the path in mist.
Posted by Phil G4OBK at 23:59