For my second day activating with Gerard VK2IO it was determined that the best place to head for were the Southern Highlands of New South Wales, which lie around 40 miles south of Sydney. The summits of Knights Hill (VK2/IL-007) and Mount Kembla (VK2/IK-015) were our priority as these would be SOTA Complete for me. In addition Gerard factored in three more summits in the day. Neither of us lived "en-route" to the area of interest so to speak, so we arranged to meet at 7.15am on the southern outskirts of Sydney where Gerard parked his Subaru Forester up for the day. I had to take a few photos of Gerard's mobile installation as it was of great interest. Their was a Codan (motorised tuned) HF antenna on the rear bumper, with a vertical whip for the 10 MHz HF APRS transmissions mounted on the front bumper. A Codan transceiver in the boot provides the automatic data transmissions for APRS location on 10.140 MHz: 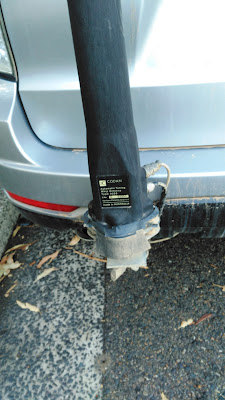 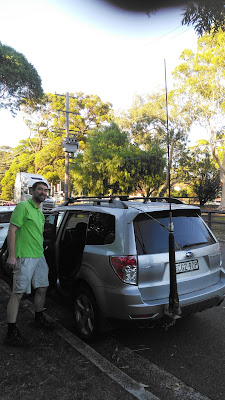 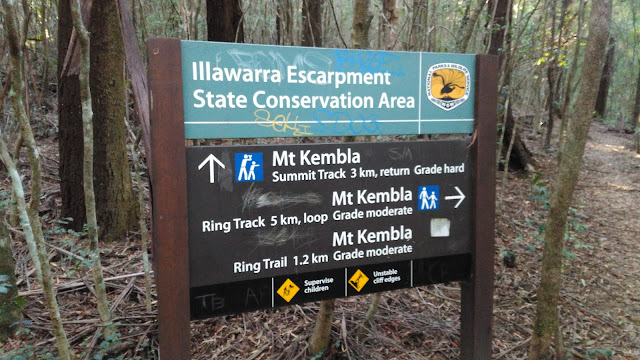 The trail to Mount Kembla which tops out the Illawarra Escarpment was well marked. It takes around 30 minutes to reach the lookout where I set up my station. Thanks to Simon G4TJC, who came here in December and provided this track for the SOTA Mapping Project:

Setting up on the rock at the lookout I just had room to accommodate my 40m length link dipole. We agreed I would start on 20m - I had drawn the short straw - nil propagation! This was unlike my visit to Mount Elliot the previous week when I worked DX - Larry K0RS in Colorado on 20m CW.
After wasting time and power calling CQ on 20 metres I moved down to 30m for my six QSOs in SSB/CW and then topped it off on 40m with one CW QSO with Ian VK5CZ. Gerard was operating in a clearing about 200m from me and we kept in touch as usual on 2m with our handhelds.

A 40 minute drive from Mount Kembla brought us to Knights Hill - a TV and commercial comms site with three very tall masts on it. The public area is well with the 25m drop activation zone. I operated on a patch of grass in full sun with a view of the masts. The radio got pretty hot: 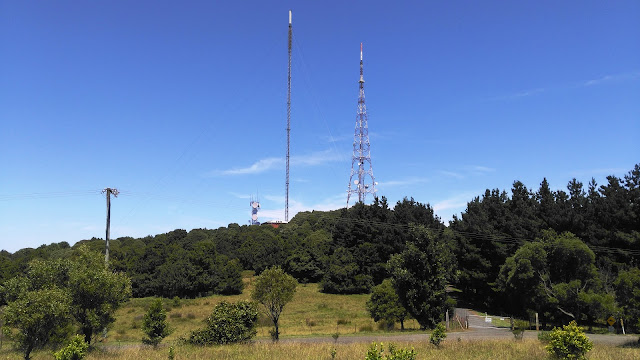 Once again after trying CQ calls and spots I found within 10 minutes that the 20m band was closed. It took me another 30 minutes to complete 8 contacts on 30m and 40m, a different experience to what I find operating in Europe when in that space of time I would have expected to make many more contacts than that with the 50 watts I was running from the FT-857.


Once again this was "SOTA Complete" for me and we moved off to our next three summits which were clustered more closely together. 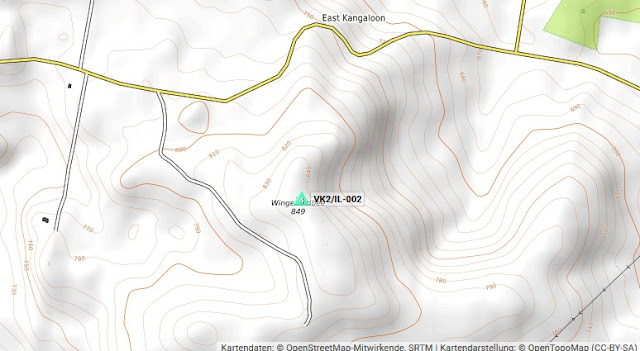 90 minutes after packing up on Knights Hill we were driving up Trig Station Lane to VK2/IL-002. It took longer to reach the drive on summit than expected as we were hungry - we had stopped off at the Robertson Pie Shop, renowned for the many certificates and diplomas won in pie making competitions throughout Australia. A fabulous place this was, standing on its own near a road junction: 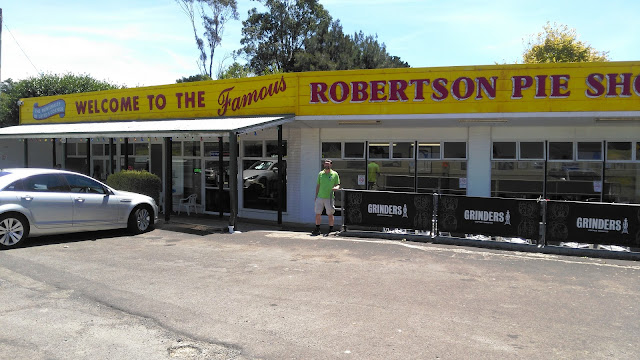 Gerard chose Steak & Kidney, I chose Potato - which turned out to be Cottage Pie. Suitably fortified we made for Wingecarribee.

The summit is on private land, however a public road, a cul-de-sac, goes to several smallholdings which lie within the activation zone. There was room to park the Toyota and using the benefit of Gerard's knowledge we both set up on the right hand side of the road near the smallholdings about 150m apart. I setup my station on some neatly manicured grass behind a broken wire fence on private land, but not in view of the smallholders house. A few passing farmer types gave a jovial wave as they passed in their vehicles during my 30 minute operating session on 30m and 40m SSB from 0345z onward. Again I drew a blank on 20m due to the propagation and I was unable to solicit CW contacts on any band despite spots on SOTAWatch and calls.
Thanks to the 11 Australian Chasers who made it into my log on SSB.

VK2/IL-001 Mount Gibraltar
This was the least enjoyable activation for me, in full sun on a concrete pad of a former radio mast near to the trig point.

However, at last there were signs of limited propagation on 20m where I worked VK3CAT and ZL1BYZ.