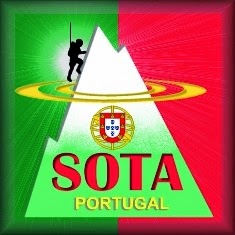 In the middle of a ten day holiday with my XYL Judy I hired a car for four days to enable us to explore the wild interior of the Algarve and allow me to activate all 8 SOTA summits in the AL region that were easily accessible. I also visited  one more "drive on" summit in the adjacent BT region, CT/BT-001. Seven summits were worth one point but the two summits closest to Monchique, AL-001 and AL-004 were worth six points and four points respectively. The most northerly summit shown is BT-003 which was too far out to contemplate visiting in the time we had available for SOTA...

For all my activations I used a Yaesu FT-817ND with 5 watts, a 5m long fishing pole, and a home made  link dipole made for 18, 14 and 10 MHz (17m-20m-30m). We flew out of Leeds Bradford Airport and there were no problems with carrying on radio equipment as part of my hand luggage. I was carrying my Yaesu FT-817 and a Lithium 3 AH leather cased laptop battery which I use as auxillary power for the transceiver. Everything passed through the scanner without a problem.

Throughout the four days of activating the mapping and software used to help locate the summits in advance at home was Open Street Map running on a Windows PC in Garmin Base Camp. I used a Garmin GPS62s and a local Portuguese 1:30000 Map of the Algarve in the field.  For navigating to the car parking places a combination of a TomTom Satnav got me to the nearest village and then the OSMAND+ App enabled me to locate the most convenient parking places. All routes used have now been loaded into the SOTA Mapping Project (Thank you Rob DM1CM).

We set out from our hotel near Carvoeiro for the highest point in the Algarve - CT/AL-001 the Serra de Foia. You could drive to the top of her from the town of Monchique, where we later had our lunch at a cafe in the main square. The summit of Foia is popular destination.  It is totally commercialised and geared up for the tourist! There were several cafes, shops, toilets and tens of antennae on Serra de Foia near Monchique.
I attempted to reach the trig point, to operate. This was impossible as it lay beyond a security fence so I walked back to the road and fastened the pole to a car park sign instead. The first station logged on 20m CW was Mal MW0BBU...inter EU propagation conditions weren't so good, they improved markedly though on the latter two summits later in the day. My last contact was with Ed DD1LD on the 17m band. I had previously met Ed and had a meal with him and other ham friends in Bregenz in Austria in June.
AL-001 Distance walked: 200m from car park
Band - Mode (QSOs): 20m CW (11) SSB (12) 17m CW (4) SSB (2) Total: 29 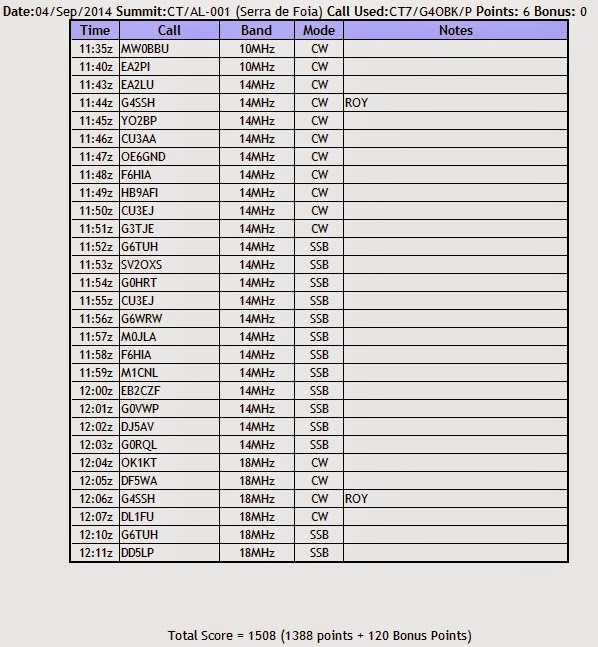 For more detailed pictures of this place see the Ham Blog of James M0JCQ who visited here shortly after me... 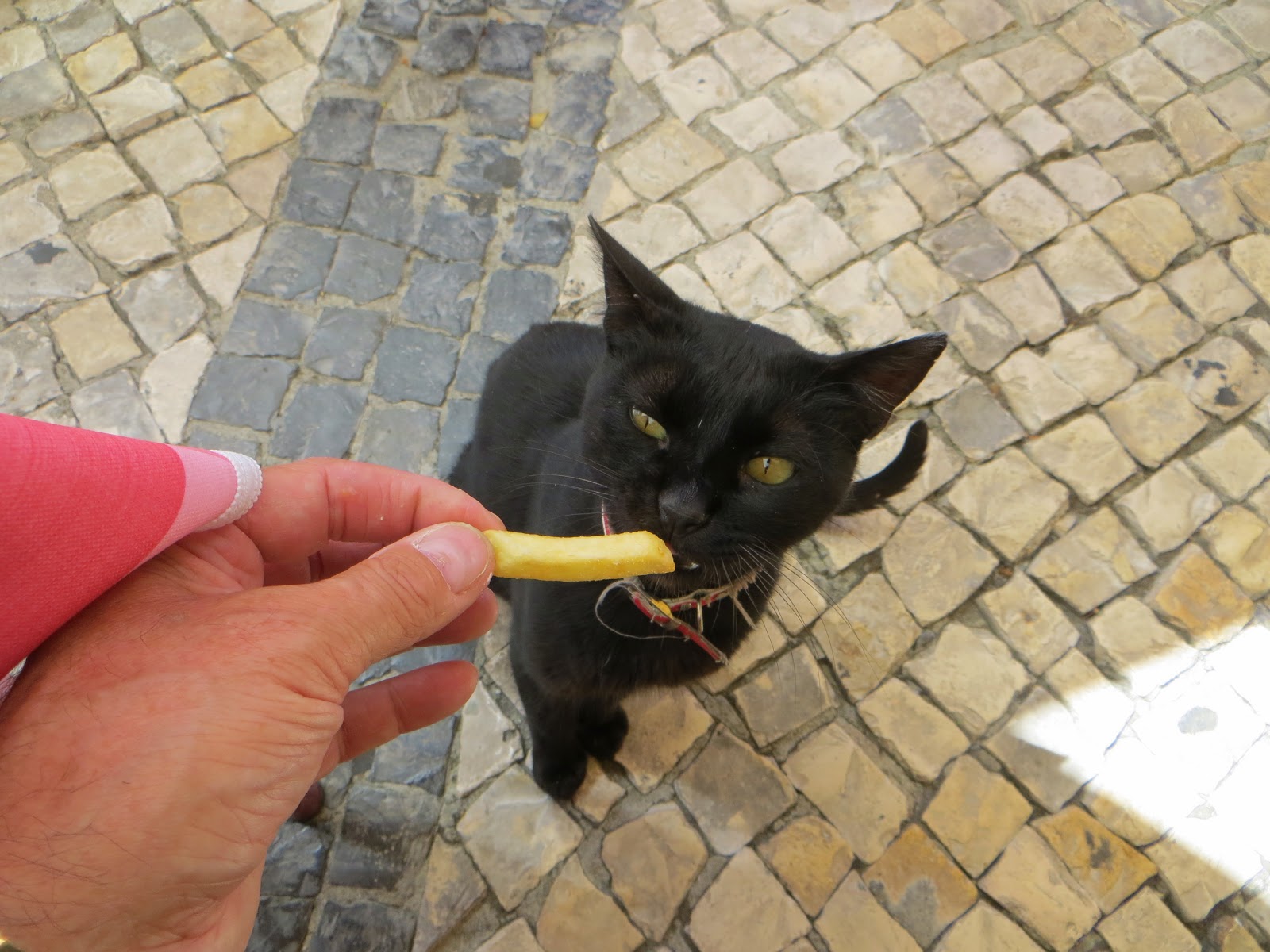 I was sitting in a pavement cafe feeding chips to a hungry cat whilst looking up above me to the Serra de Monchique (locally known as Picota). This was another very easy summit to climb in the Algarve, which is less than 3 Km from Monchique.

So we had our lunch and set off in the car up the N267 road to the turn off. A tarmac road climbed up to the parking place, where the fire warden parks his vehicle.


It took no more than five minutes to walk up the stony slope to the trig point. I set up the 5m pole and started operating with Morse on the 20m band - conditions were excellent. I followed that with 20m phone and then moved to the 17m band for more CW / SSB contacts. Part way through my activation it was shift change time for the fire wardens in the tower...

The incoming fire warden  came up the hill carrying his own plastic chair...presumably few accoutrements are provided  by the authorities! I imagine this is a paid job and not a voluntary sector post.

After almost an hour operating I realised that poor Judy was sat back in the car with the door open to keep it cool and that she could well be getting cheesed off with reading the book on her Kindle. We also planned to go to CT/AL-008 and this was some distance away, and that summit involved a decent walk. It was time to pack up then and head back down the hill to face her wrath...."never again, never again" she said... How many times have I heard that before? She wasn't happy when the shift change had taken place understandably, with the other van arriving, until she knew what was going on. I smoothed things over and we set off in the direction of AL-008 Sapeira, our third summit of the day...
AL-004 Distance walked: 300m from car park with minimal ascent
Band - Mode (QSOs): 20m CW (23) SSB (22) 17m CW (10) SSB (14) Total: 69
S2S with GM4WSB on GM/SS-172 Best DX - Probably SV2OXS

CT/AL-008 Sapeira QRV 1710z - 1729z 5 watts & Dipole at 5m
As I recall, writing this over three months post activation, it took around 45 mins from AL-004 to reach the parking place for Sapeira AL-008. I left the Seat Ibiza under some olive trees for shelter and we walked up the track opposite in what was rugged countryside. The ungraded track had been driven into the scrubland and was not good enough to drive on. I got the impression that nothing much apart from perhaps hunting and beekeeping went on in this parched area. The undulating 20 minute walk to the summit was just over 1 Km in length. You can see the track in the picture below, as we climbed from the dip we left the track to follow the mown section uphill to the summit: 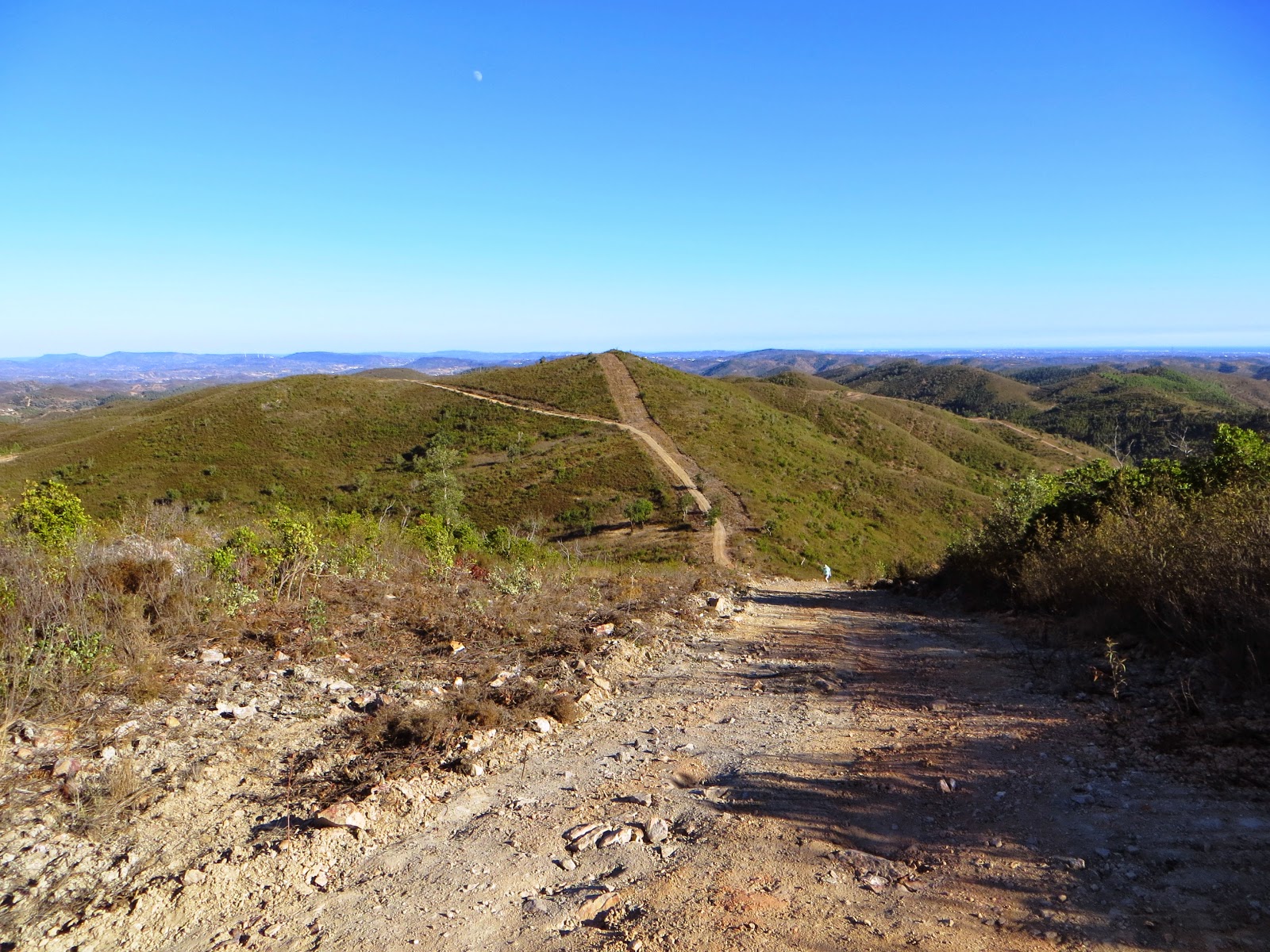 My first QSO on 30m was with my friend and former work colleague Roy G4SSH, who lives close to my home QTH in North Yorkshire. Roy was helping me post alerts via my mobile phone when I was able to call him for a "dial a spot" during this four day campaign...
We were challenged for time so I confined my activities to just two bands.

As the sun goes towards sunset 30m is always a good band to try and it was... I then moved up to 20m to do some CW - one QSO with PA9CW/P resulted and that was it, I couldn't hang around waiting for further CQ calls to go unanswered, so I went on to SSB, first QSO was with Mike G6TUH who was proving to be a most useful spotter saving me valuable time and maximising the contacts made in the shortest time possible. We needed to get back to the hotel for our dinner in time before the restaurant closed, which meant that after 20 minutes I dismantled the station and we made off back to our hotel for showers before dinner...