January 3rd 2016 and I had to go to Bristol on business. It's too far to drive there and back from North Yorkshire in a day so I decided to turn my visit into a two day SOTA trip and on the way back through Wales meet up with Geoff 2E0NON who lives near Malvern.

We would have liked to have activated SW-035 Mynarth, which is near Brecon. However that summit would be left for later as access is not permitted during the shooting season. We have an assurance from the Usk Estate that we will be allowed there once the season is finished, and it now remains the last remaining South Wales summit unactivated by us. So SW-015 it had to be. We'd been here before in December 2012 and failed badly - we didn't make a single QSO. See my previous blog report. The summit is surrounded by higher hills and this makes it difficult to make contacts on 2m FM. This previous attempt was before we took up carrying a more powerful transceiver and battery. This time rather than running 5 watts to our vertical dipole we ran 50 watts and we were hoping for success...

Leaving Bristol at 6.15am I crossed the Severn Bridge - the toll charge having increased by 10p to £6.60 at the turn of the year. The weather was very bad, with heavy rain and it wasn't stopping when I arrived at the col between Mynydd Troed (GW/SW-009) and Mynydd Llangorse (SW-015) at 07.45am. Geoff appeared shortly after that and we set off for the summit with our golf umbrellas and radio gear. We stopped short of the top and found some shelter from the wind below the ridge inside the 25m activation drop zone:
CQ calls on 2m produced the four contacts needed in 11 minutes and we got off the summit as quickly as we could.

Stuart, G0LGS in Cheltenham was our 4th contact after calling CQ for some minutes. Stuart has helped us out with contacts on lots of summits in Wales and the Welsh Borders. We met up with him a couple years ago on a fine day when we were activating his local summit of Cleeve Hill, G/CE-001. As time was short we chose another unique summit to activate to the north, this was near to Builth Wells.

If you read the comments on hillbagging,co.uk and on the SOTA Reflector people have had problems getting to the summit of Pen y Garn Goch due to tree cover. When you look at the latest OS Map (25K and 10k Streetview) "rides" have been added to the map which were not shown on previous maps of Irfon Forest. Due to logging operations some of these rides have been turned into graded tracks and this is what we used to reach the summit trig point. There is parking for a couple of cars at the entrance to the forest at SN 891504: 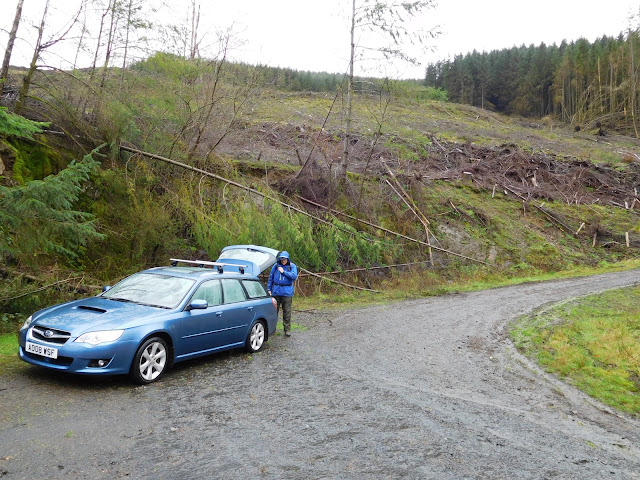 The walk to the summit took 35 minutes and we arrived at the trig without a single scratch between us...
We had a little more success with the 2m operation here and completed six contacts:

As we packed up the rain finally stopped and our walk downhill was quite pleasant - then a rainbow appeared: 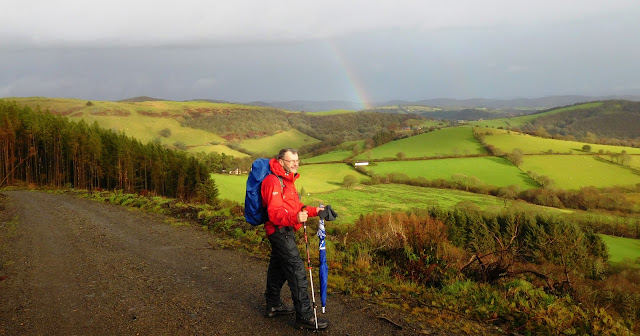 Another two summits completed - and we will be back activating in Wales later in the year.
Posted by Phil G4OBK at 23:59