Another dry day dawned - with sunshine for a change and a clear blue sky. I had to get back to Vaclav Havel Airport west of Prague to hand in my Skoda Citigo hire car, get a meal and catch my plane but that was at sunset - no later than 8.00 pm local time in late September. Naturally I wanted to activate the maximum number of summits I could with the time I had available and not miss my plane, so it was a case of "making hay while the sun shines" and this is what I did.
In the event I had breakfast, leaving Masaryk's Cottage just after 8.00am. By carefully choosing the summits to include "5 drive on summits" I activated 8 summits on HF in the day and still had time for a meal at the airport before catching my plane back to Bristol. In fact, I had decided to operate in the style of my friend - world top scoring SOTA Activator Jan Lacicka (OK2PDT/P) who I had met two days earlier. The only difference in the style of operation was that I was running QRP with Yaesu power at 5 watts from an FT-817 and I was more likely to use Morse and Phone, whilst Jan usually operates at power levels of QRPp - less than 2 watts using a home brew transceiver and mostly just stays with the Morse operation...

You would think this last day took a long time in planning with eight summits activated, but that was not the case. I had earmarked five summits for my last day prior to the tour, however having ticked off two planned summits the previous day that I intended doing on my last day, this allowed me to add two more new summits making six. Then as I toured between two summits approaching Nachod in the middle of the day, a closed road diversion caused me to deviate and this took me through a village with a 10 minute walk to an extra "bonus summit".

After that and whilst driving towards Prague, still within the OK/KR area, I got stuck in a traffic jam due to some roadworks. Out came my tablet on to the passenger seat and on opening up the OSMAND+ App (with all OK summits programme in prior via GPX) to confirm my position, I realised that I would shortly be passing within a few miles of a drive on summit, so I went there for summit number six in the middle of the afternoon. 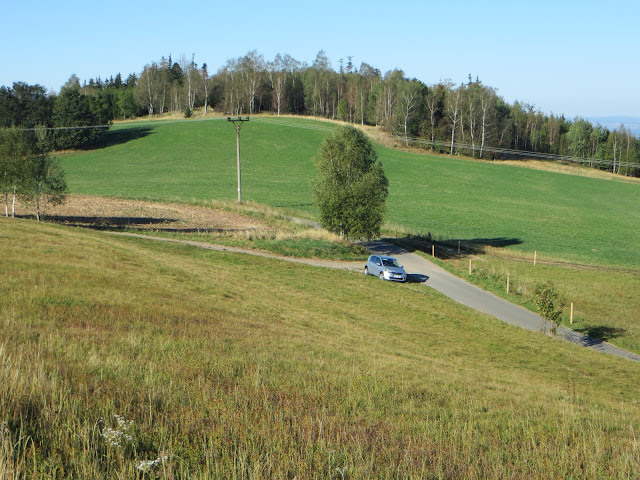 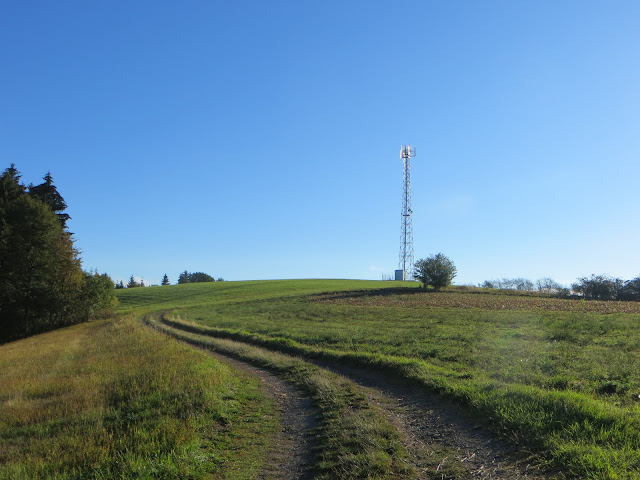 A short walk up the grass track pictured to a radio mast and communications compound just outside the village of Nedvezi took me to the summit of KR-078. It was an early start for the chasers and contacts dried up in less than 20 minutes. I wasn't staying any longer.

Walk to summit: 12 minutes
QRV: 0754z - 0812z
Bands: 30m CW 20m CW/SSB
Contacts: 26
Best DX: None - all Europe
S2S: None
As it was later I had a few more callers on Stenka but none this time were DX. Parking on the grass verge by the main road near the road junction which leads to OK/KR-020 I headed up a track and then climbed a field up to the top of a ski tow surrounded by small fir trees. The ski tow slope went down the other side of the hill from where I walked up. I set up against the fence of the ski-tow and enjoyed my second session, which was now too late to pull in any DX contacts with the sun high in the sky. After leaving the summit I drove a short distance on the side road opposite my parking place at the junction to reach OK/KR-020 - a drive on summit. 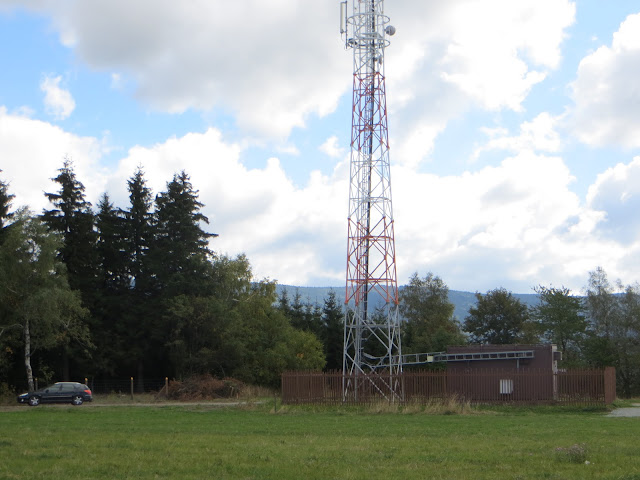 I set up and operated against the metal fence of the compound close to the radio mast, RF wise it seemed a pretty noisy place, atmospheric or localised noise I couldn't say. Its a chance you take operating close to these comms towers and I have had RF interference problems when receiving on HF in these situations before. The picture above was taken from the car before I made my "final ascent" to the summit! After closing down I estimated I had around a one hour drive north to a summit near Nachod, but I was to encounter a roadblock which turned out to be beneficial when the diversion took me near to an extra bonus summit (KR-080) which was a pleasure to activate from. 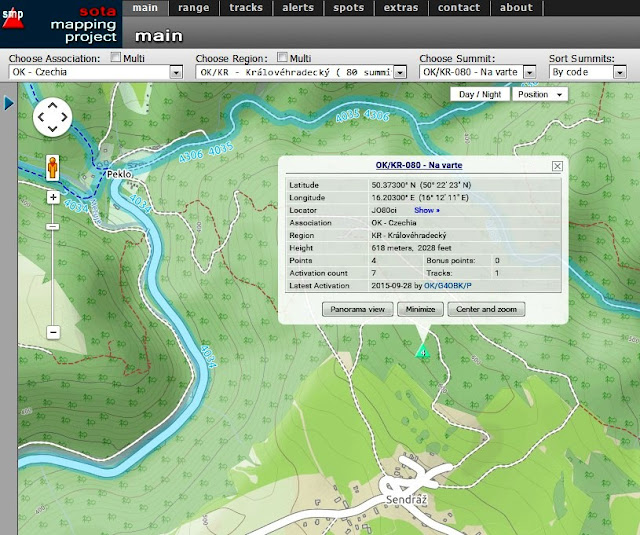 As I was driving on my way to activate Dobrosov KR-079 I encountered a road closure. I drove up to the barriers near a village and had to turn round. My OSMAND+ map app gave me an alternative route to Nachod. It was quite a detour as there was a river and valley in the way. However, I noticed using my app that this detour took me close to the village of Sendraz.  From here a short walk would take me to the edge of a wood and into the activation zone for KR-080 Na varte. What a bonus, and what a view, stretching tens of miles: 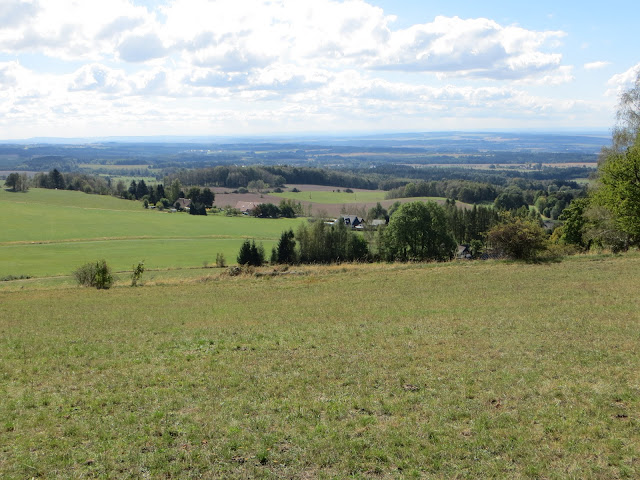 Who would imagine that a summit so easy to reach offering 4 points would be so under activated? Including my visit Na Varte has only had seven visits for SOTA...back to the car and the diversion, I proceeded to:

So, here we have another drive on summit - this time it had a lovely and busy looking restaurant on the summit. No time for a dinner though, it was on with the activation that was my priority. I  had driven into the outskirts of Nachod, a large industrial town or even a small city, I am unsure. It was a long way round. KR-079 and my previous summit KR-080 are only around 3 Km apart as the crow flies, but I seemed to be driving for around 30 minutes to reach this place due to the diversion. 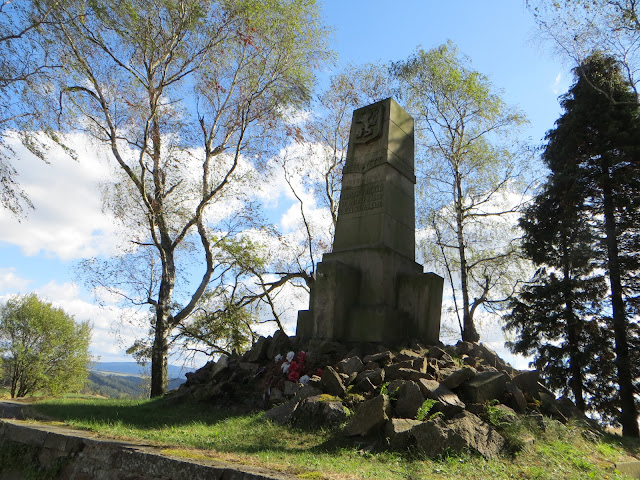 I parked away from the restaurant and walked behind this war memorial and set up my station against the fence running around a communications compound 100m behind the war memorial. I wished I had had more time to look around and visit the restaurant, but I had work to do and another energy bar and drink of cola would have to suffice for now...
Posted by Phil G4OBK at 07:37