I was able to start my breakfast at Masaryk's Cottage just before 8.00am. Czech Republic local time is two hours ahead of UTC time in the summer. My planned linear walk went south over five 10 point SOTA summits from the Masaryk's Cottage on KR-069 on the Orlicke Hory ridge, finishing when I came downhill to the outskirts of the village of Orlicke Zahori. From here I had arranged to be met by Vrata OK1KT and Jan OK2PDT in Vrata's car, when I would be taken back to the Masaryk's Cottage. I left just before 8.30am (0630z) with a packed lunch in my rucksack.
OK/KR-008 Velka Destna

The first summit crossed was OK/KR-008 Velka Destna, and a tarmac cycle route brought me close to it. There was an information board on the summit and a round shelter built from concrete blocks where I set up my station. As I was operating the summit was visited by several cyclists. The operation followed the same pattern on every summit I visited on the tour. It took around 10 minutes to erect the 5m pole (there was usually something to support the pole with bungees to fasten it), fan out my antenna and to plug up the FT-817 and start operating. I used the Rucksack Radio Tool for spotting which was possible on most summits in the area. 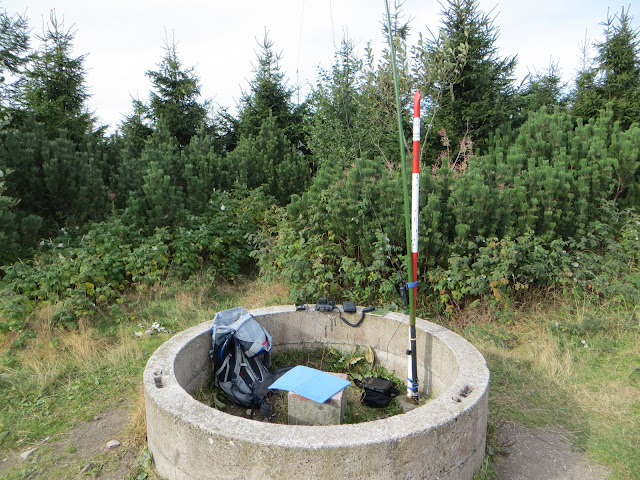 My chosen bands for the whole expedition were 30m (10 MHz) Morse and 20m (14 MHz) Morse / Voice which meant with varying conditions, I was able to log plenty of stations in the UK, mainland Europe and further afield, including USA, Canada and Australia. On average I was making around 25 contacts from each summit - on some summits less and on other summits more, using a simple home made link dipole. On this summit 27 contacts were completed before I moved off on the 40 minute walk to the next 10 point summit of Vresnik OK/KR-060.

When I reached the highest point on the track at Vresnik I left it and set up the station among some young saplings in an area of the thinned out forestry land. The sun was shining now and it was most pleasant in the outdoors making SOTA contacts on HF. You don't get lonely when activating SOTA on HF with so many friends and ham radio acquaintances keen to make a contact with you...
After KR-060 I soon left the main track to follow my GPS preplanned route through part of the forest. It was fairly boggy with no real discernable path but I got through quite easily. The previous day I had photographed a military bunker and I again did the same today, however this border line is full of bunkers... I must have passed at least 15 over the three days I spent on the ridge so to save repetition I won't publish the photo of the two I passed on the track between KR-060 and KR-009!
f
OK/KR-009 Orel

This summit lies right on a shooters track, and I set up my station against what appeared to be a military communications hut on the flat topped summit. I found out the next day (when I met Jindra OK1NOR - purely by accident), that this was a Ham Radio Contest Club's Caravan and he belonged to the club!
Operations were becoming quite routine now. Job done I moved off and found a nice place to have my lunch at the bottom of the hill where there was a rustic table and bench by a forest hut.

On my way to the highest point on Homli KR-070 I passed a comms tower. I then left the track and headed up into the woodland to set up on the highest point where the trees were more sparse. There was nothing worth photographing there, so here is a picture of the tower, which served as a marker for later in the afternoon when I returned there to go down a track which took me to Orlicke Zahori to meet Vrata OK1KT in his car: 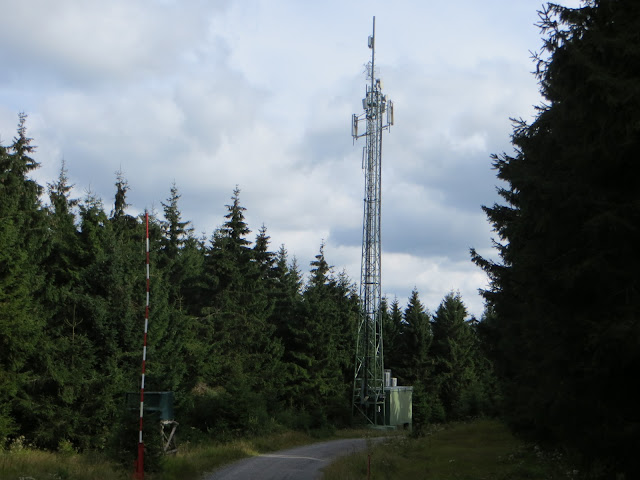 After activating Homli I rejoined the cycle / walking path, which was well used. I passed many people, walking and cycling offering them the greeting of "Ahoy" which was the limit of my Czech lanuage skills as I went on my way...

Among the many people I met on this route there was a walking group of around 10 young people, aged around 30. I passed them as they were picking and eating bilberries. Continuing on for another 500m I reached Tetrovec KR-062 and started to set up my station. The walking group arrived and as usually happens, wanted to know what I was doing. The leader had a really good command of English so I was able to explain, and we had an enjoyable discussion about SOTA, amateur radio and walking in the Czech Republic. I was then offered the hospitality of a drink of their home brew - which turned out to be a warming mouthful of Plum Schnapps - to my taste it was very nice!
As I approached the end of the afternoon I packed the station up in readiness for the next days activity and made my way back to the comms mast I mentioned earlier. Jan OK2PDT had furnished me with a route down the the village, following ski tracks and a ski tow and I was sat by the roadside in Orlicke Zahori by 5.00pm local time awaiting the arrival of Vrata and Jan. This rural road which follows the Polish border, goes to Destne and is on a regular public bus route - a modern coach passed by as I waited.

Vrata OK1KT and Jan OK2PDT (who I had worked earlier in the day for two "SOTA Completes" - thank you Jan) arrived within 10 minutes, and we returned to Masaryk's Cottage for a tasty Goulash Meal with dumplings and some Czech Beer.

I was able to thank Jan for his help with my route on the day and for telling me about Masaryk's Cottage where I was staying. The meeting was really enjoyable, we talked about SOTA and I learned a lot about life in the the Czech Republic and how things have changed since the country became free and independent.   Vrata returned home after a few enjoyable hours. He lives over an hour away in Hradec Kralove. Jan was staying some distance away from Destne.