This was my second visit to Fumat MA-048. I led a group of walkers up to the summit the previous day carrying a 2m handheld - but I only made two QSOs with EA6/G4OOE and EA6/G3TQQ on that occasion...
Today on my last full day in Mallorca I needed an early start in the hire car... Later in the morning I was to collect Dave G3TQQ for an activation of MA-050. Then we were to meet my XYL and friend Kay for lunch in a beach bar, before heading off for our final activation of the holiday which was MA-066. 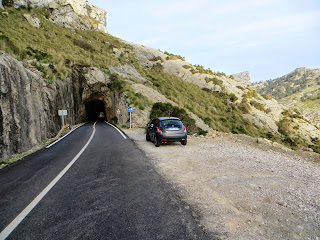 It was easy negotiating the hairpins leading on the Formentor peninsular - for a change. At 6.00 am local time they were traffic and cyclist free. The MA-2210 road runs through a tunnel at the bottom of Fumat Mountain. 50m after coming through the tunnel an area on the left has been created which will accommodate about five cars and this is where I parked. From there you need to walk uphill for around 350m and then climb up the banking on your right to reach the donkey trail path, which is a zig zag stone path formerly used for conveying supplies to the Formentor Lighthouse before the road was constructed. 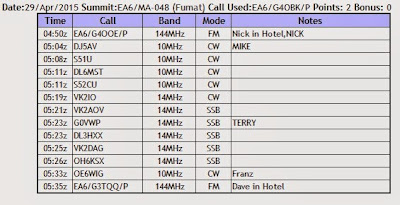 The donkey trail zig-zag can be short circuited in places and then you soon reach the col. The climb to the top looks a lot more difficult than it actually is.

I was set up and on the air for 0528z which was just after sunrise. EA6/G3TQQ and EA6/G4OOE were worked again back in Port de Pollenca. Europe was still partly asleep and lacking in propagation, however I made up for it with three contacts with stations in Australia. With Fumat being quite pinnacle like, the shadow of the mountain on the ground below me was interesting. The summit pictured on the right ridge is EA6/MA-041 El Pal,  which to date has not been activated. 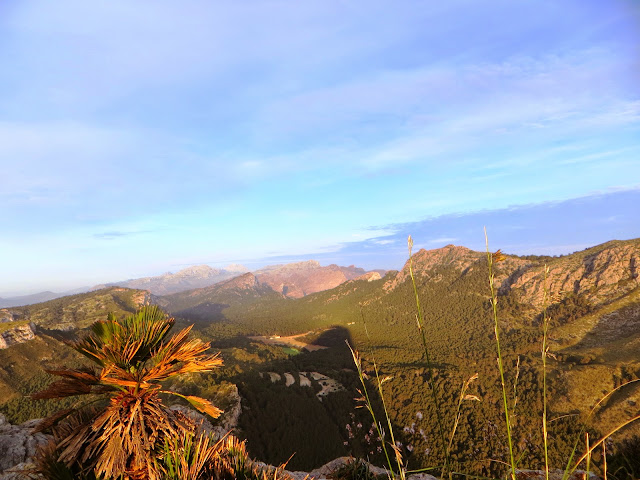 I was operating for 45 minutes, but disappointing as the total number of contacts was, the quality DX worked made up for it. It was too early for 18 MHz - the band was tried but no contacts resulted from repeated CQ calls.

I left the summit to head back to my hotel in Port de Pollenca for my breakfast, and to collect Dave G3TQQ before returning to Formentor to activate Na Blanca MA-050.
Posted by Phil G4OBK at 19:00