Our final day as we departed from Gatehouse of Fleet in Dumfries & Galloway. I had put off activating Colt Hill on our arrival day three days earlier due to wet weather, however today was no better - it was wet, but we had no choice. We stopped off in Castle Douglas en-route for supplies. This is a lovely little town which even has a large Tesco Superstore, although we got our supplies from a small convenience store in the main street. From Castle Douglas we took the A713 north towards New Galloway and then cut across country to Moniave to follow the Dalwhat Water up the valley to the parking place for the walk to Colt Hill at Cairnhead, grid reference NX 702971. The last mile of road is unsurfaced, but safe to drive on with a normal car at a reduced speed.

The outdoor landscape artist Andy Goldsworthy lives nearby in Penpont and in and above this valley are four large Dumfriesshire sandstone sculptures he designed and led the building of called The Striding Arches - one of which is on Colt Hill itself.  One of the other arches is linked into Cairnhead Barn so before starting the walk from the nearby car park area we checked it out:

This like the previous day's walk up Beneraird, was a very straightforward walk which would have been excellent on a bicycle for most of the way. This time we walked a graded forestry track to a junction at NX 692991. If a bike had been used it would probably be best left here and then walk the rest of the way. From the junction a rougher and steeper path leads east for 550m to the Striding Arch and trig point on Colt Hill, GM/SS-116 at 598m ASL, the height qualifying the summit for SOTA winter bonus points. It took us 90 minutes to reach the summit over a distance of 3.35 miles with an ascent of almost 1300 feet. The pack was heavier today as we had a packed lunch and I had drawn the short straw so was carrying the 1 litre stainless steel flask of tea...

It had rained most of the way to the summit. We took shelter behind the arch and set up the VHF antenna by fastening the pole to the nearby fence: 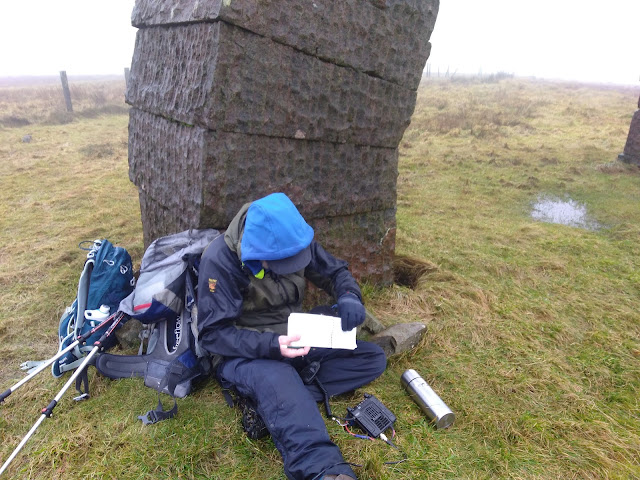 I was again encouraged by the number of stations workable on 2m FM with a simple vertical dipole and 40 watts in England and Scotland, being Sunday and wet I guess that helped with plenty of amateurs home in the shack, including first in the log Geoff GM4WHA in Annan:

There were two S2S contacts made - with Colwyn MM0YCJ/P on Andrewhinney Hill GM/SS-083, and M7MVD/P on Dent G/LD-045 who was not particulary aware of SOTA despite the operator telling me he went up Dent regularly to extend his range on 2m FM... I was grateful for the S2S point either way.  After 15 minutes activity in foul conditions it was time enough to get packed up and head back to the car - a walk of around an hour. Once there we changed into dry clothing and drove home via Dumfries with our first rest stop at 1545 hours at the Tesco supermarket on Lockerbie Road, Dumfries for a toasted tea cake and tea in their cafe. The store remaining open until 2200 hours as Sunday trading laws in Scotland are different to England, where supermarkets have to close at 1600 hours. We reached home in North Yorkshire around 1930 hours. 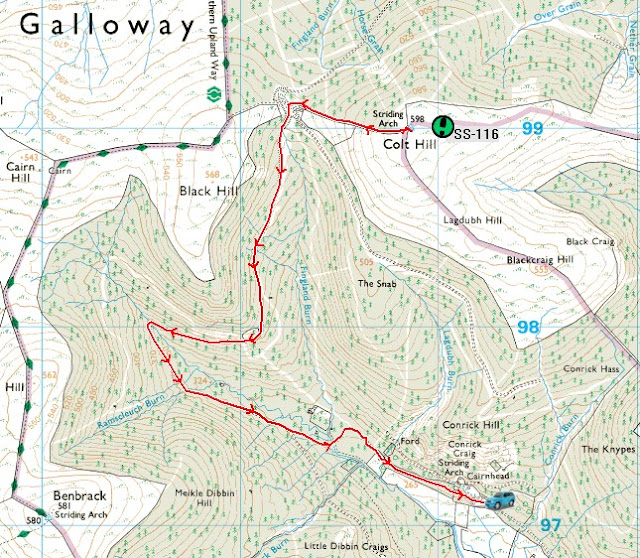