Our second day activating.  This was totally different from the first day when we concentrated on activating the easier Mallorcan summits which were accessible from a motor vehicle.  The Talaia d'Alcudia MA-040 has to be reached on foot and that is probably why it hadn't been activated before.

The walk route was chosen by the leader Anne from the Walk! Mallorca book by Charles Davis. Between us we agreed that Anne would lead the ascent with the group and that the three radio hams would leave the start 20 minutes earlier to allow more time for our activation of the unique summit. After we had lunch on the summit I was to lead the group back to the car park on the coast, near to a bar called S'Illiot. We returned the same way as we came up, the other group members climbed to the summit via a steeper alternative path.

It took me 40 minutes to reach the summit from the coll - the 1 h 40 min time on the sign refers to a longer route which goes around the back of the mountain. Here is a map of the route taken - which was also uploaded to the SOTA Mapping project in GPX format: 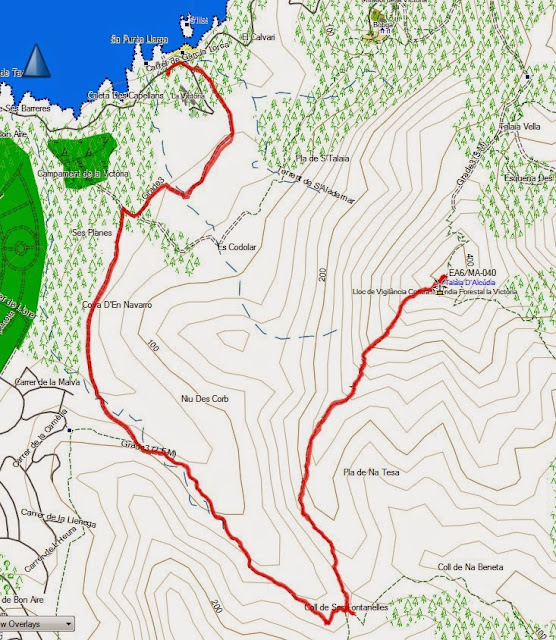 As we approached the summit there appeared to be small Dr Who type Tardis cabin on the summit with an antenna on the top of it. It is hard to see it on the photo below which was taken looking up, and unfortunately I did not take a photo of the "Tardis" (which was an emergency hut for fire watching I believe) when we reached the top: 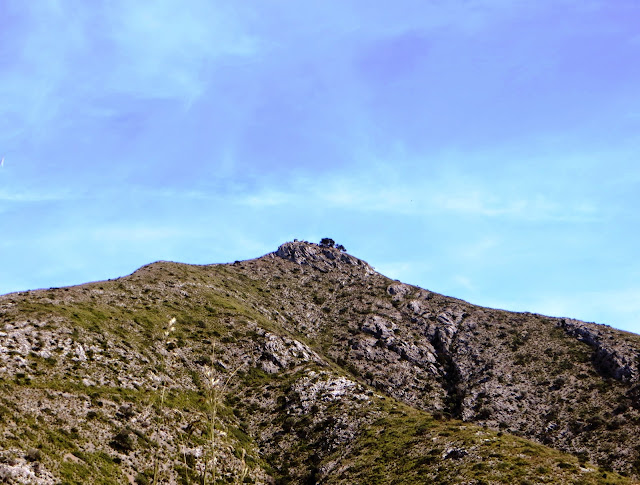 The summit was very busy and we had lots of visitors from several nationalities asking us what we were doing. It got busier later when our walking group members joined us...