With no SOTA activations since I spent a week with Victor GI4ONL in the Czech Republic in September and no holidays since, we decided to head off to Scotland on the Scots 2nd January Bank Holiday day for three days walking with SOTA. The plan was to activate Colt Hill GM/SS-116 on our way to Gatehouse of Fleet where we were booked in for 3 nights at The Murray Arms. "We" being me Phil G4OBK, XYL Judy and our terrier Treacle. The hotel allow dogs in the bedrooms and bar at no extra charge.

With Thursday being a washout weather wise we held off Colt Hill until the Sunday return journey and spent the day,after a late start, travelling to the hotel in Gatehouse of Fleet.

Cairnsmore of Fleet GM/SS-065 was therefore first on the list, and the hardest walk of the three on the short tour. We took what is known locally as the tourist route and came back the same way. We started from the car park (NX 4624 6328) near Graddoch Bridge, Palnure.  Being unfit after a period of ill health meant slow going for me and it took us two and a half hours to reach the summit over a distance of 4 miles with 2300 feet of ascent. 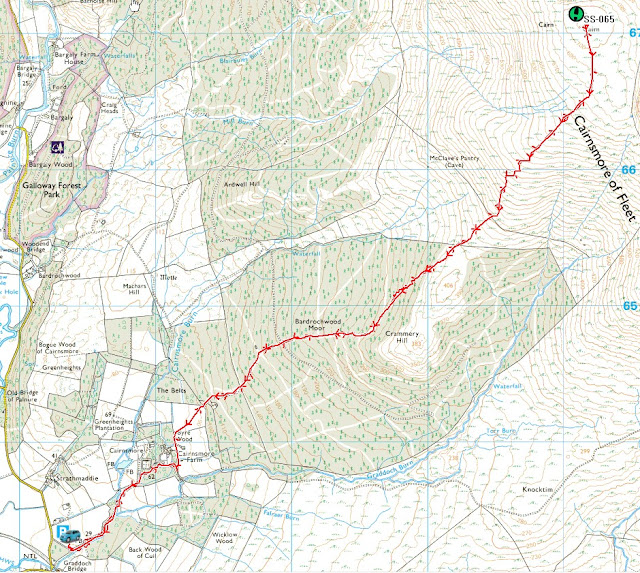 ©Crown copyright 2020 Ordnance Survey. Media 010/20
We started the walk in fine weather that soon deteriorated to rain, sleet and then snow, which invaded the shelter whilst the 2m FM activation took place. With 40 watts from the Yaesu FT-1500M and dipole we made 11 contacts into England, Scotland and Northern Ireland in a 15 minute smash and grab activation and got the hell out of it. Two highly valued S2S contacts with Grange Fell SS-249 and GI/SM-005 Mullaghmore were completed with Andrew GM4VFL/P and Ian GI0AZB/P. We were very lucky with the timing to get them...

This photo of Judy and Treacle was taken after we left the shelter at the memorial to the airmen lost on the mountain in nine previous crashes on Cairnsmore of Fleet:

The weather was too inclement to eat our lunch on the summit, so we stopped off once we reached the shelter of the treeline at NX490652 and ate there. We left the car at 1012z and returned to it at 1514z.
Posted by Phil G4OBK at 23:59