The Murray Arms in Gatehouse of Fleet was proving to be a friendly welcoming hotel. There was nothing flash about it, but the food was good, the rooms clean and we would stay there again for sure. A full Scottish breakfast for me and we were heading towards Stranraer by around 9.30am. The previous day when we went to Cairnsmore of Fleet we had bought sandwiches from the Spar shop in Gatehouse, but as today's foray to Beneraird was a shorter walk we planned to have a late lunch in Stranraer, so the rucksacks on this occasion were considerably lighter...

Approaching the lodge from the south via New Luce a single track road (shown as a yellow on the OS map) but rough for the last mile or so, takes you to the gate and cattle grid for Lagafater Lodge. There was an unofficial sign around one mile back from the lodge gate, advising no access to vehicles, so its advisable to park up near the sign and walk north towards the lodge. 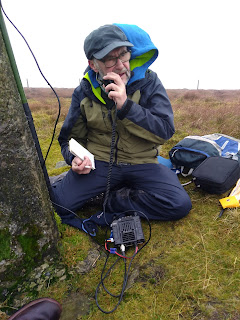 The walking track crosses a bridge just before the occupied Lagafater Lodge. Unseen dogs were barking and cars were parked up, but there were no people present as we passed the front of the Lodge on our right, going into a short section of woodland before exiting on to a moorland track. It was then a 1.5 mile straight walk North to the trig point at Beneraird GM/SS-201. My GPX track has been uploaded into the SOTA Mapping Project. This was an enjoyable activation as we had the fairest weather encountered on our three day tour. 2m FM was again deployed for speed with 40 watts and a vertical dipole on a 4m high pole. A thirty minute session produced 15 contacts with a mix of Northern Irish and Scottish stations. With being so far west and on a summit of limited height without a beam, meant we were out of VHF FM range of the English stations in Cumbria, but I was delighted to speak with so many in GI and GM including old friends from the GM/SS-246 Ailsa Craig SOTA Expedition of August 2009, Jack GM4COX and Robert GM4GUF.  Packing up we returned to the moorland track, pictured below. It was a 40 minute walk up and 35 minute walk back down - 1.7 miles each way with 650 feet ascent, measured from the cattle grid to the summit.

We drove into Stranraer and enjoyed a pub lunch at The Customs House - a pub that allowed dogs in, and was rather like a Weatherspoons place, although owned by another company called Green King. A hot lunch for two with drinks cost around £15 - an excellent deal. After a walk around Stranraer we headed for Newton Stewart to visit some elderly relatives of mine of who live in the town. Then it was back to The Murray Arms in Gatehouse for our dinner. Report for Colt Hill GM/SS-116 to follow.
Posted by Phil G4OBK at 23:59