Judy (XYL) and I held off our usual January winter short break in 2019 and put the money aside for a longer one week holiday in Porto, Northern Portugal in March. We were really lucky with the weather as Spring appeared to have come early in Portugal. I saw a deal advertised on the Travelzoo website by the company Broadway Travel, looked at the idea and then packaged a similar holiday ourselves, which gave us more flexibility to stay in Porto for a week and hire a car.
As well as a city break we wanted to go into the Portuguese countryside, visit a few small historic towns and activate a handful of SOTA summits in the region. Porto is within reach of the BA, BL, MN and DL SOTA Areas, with a good motroway network in which to reach them. We stayed at the Trindade Hotel, which is around one mile from the beautiful and interesting wide river frontage in Porto. The hotel was high rise, and we landed on the 8th floor. This wasn't a problem as the lift was 100% reliable. The service in the hotel was very good, with an excellent breakfast included, and included a welcome glass of port on arrival. White Port? Yes please, never had that before..... There were many British people staying there who had booked the 3+2 night break offered by Broadway Travel. It was their ad that initially drew our attention to this hotel (3 nights Lisbon, 2 nights Porto with a rail journey in between). We had been to Lisbon twice and so we ruled out the two centre option.

I hired a car very cheaply at Porto Airport. This was booked through Ryanair, who also provided the flight from Manchester. A white and almost new and unmarked Renault Clio was provided by "Drive On Holidays" for just €48 for a one week rental. A transponder was provided by the car hire company for saving delay at the the motorway tolls. This cost an extra €13 for the week. Additionally, the final toll charge levied for our motorway journeys, over 3 days and for two local motorway journeys to SOTA Summits on early mornings, came to just around £15. I was therefore very pleased with the reasonable cost of having independent transport. The one drawback was that Porto, like most cities, had no free parking for several miles out of the city centre. There was parking meters for miles around. The Trindade Hotel however had an arrangement with a nearby multistorey car park. The hotel paid the cheaper overnight fees, but the driver had to pay during the day. We didn't use the car on 3 days, so this incurred an extra cost of around €45 on to the motoring costs. In retrospect we would have been better staying in a hotel in the countryside outside Porto and travelling in on the three days when we enjoyed the sights and sounds of the city.  Petrol was around 10% cheaper in Porto than it was in the UK.

After arriving the previous day, Friday 15th March had to be the main SOTA day, as it was the last day when the extra Winter Bonus was available in Portugal, meaning that if three summits above 1000m were activated in the day, I would benefit from an extra 9 points.

My good friend Pedro CT1DBS (who I met when I visited Porto in 2016) activates regularly in the Porto area.  Pedro gave me some advice about the area and the summits which was of great benefit. I also got extra influence and encouragement from this excellent 2015 YouTube video from Joachim CT7AGT of the first three summits on my list.
After a leisurely breakfast on a fine sunny day we drove south east of the city for over an hour to take us into the Beira Litoral region of Northern Portugal when there are ranges of hills in excess of 1000m.  For ease of access we chose CT/BL-004 Serra da Freita (1085m - 8+3 points) which housed a wind farm.  I started operating at around 11:30z on the 20m (14 MHz) band and finished on 30m (10 MHz). Propagation conditions on the radio were superior tto what I would expect from the UK.
On BL-004 there was an observation tower and viewing platform with topograph. We weren't the only tourists there - we spoke briefly to a long distance fell runner and another couple who arrived by car to take in the far reaching views.
It was lunchtime as we motored to our next summit which was again on the highest point of a wind farm, however just before we got there we diverted to a campsite cafe, which Pedro had told me about. This was on a side road just a couple of miles from the activation zone of CT/BA-012 Candal (1106m - 8+3 Points). This we found to be a good stop off and we got sandwiches and a beer. The lady owner was so friendly, and told us about the apartments she had for rent on the site.
This place would make a superb base for a few days activating in the Beira Alta and Beira Litoral area. The campsite and cafe is called Retiro da Fraguinha Lugar da Fraguinha, 3660-043 São Pedro do Su and they are open all year round. The owner told us that in June, July and August the site was very busy. She suggested that due to the popularity, those months are best avoided and mentioned that campsite details for booking the apartments could be found on Facebook. After the nice lunch we drove into the Candal Wind Farm, parking on the track below the summit and climbing a few hundred metres to the highest point - another 11 points earned, on a very productive activation. 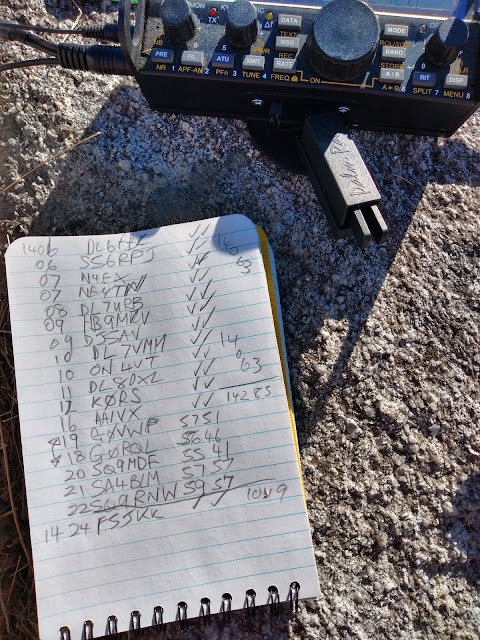 Good propagation on 20m shown on the last page of my logbook on BA-012 included several USA stations...finishing off with "regular chaser" Eric, F5JKK on the 10 MHz band.

It was now a long drive uphill and down dale to the 3rd summit of BA-003. We were keeping good time so a 4th activation near one of the towns (dinner needed before the drive back to Porto) in the area would be possible before returning to Porto. My XYL Judy is not the best passenger and she was scared by some of the drops from the roadside on the descents, despite my careful driving.... The Portuguese roadworkers certainly know how to build amazing roads with good surfaces and cambers over the tops and sides of their big mountains!

We reached CT/BA-003 Serra de Sao Macario (1052m - 8+3 Points) at around 1530z and parked below the summit - a 10 minute walk took us to the highest point where we found a locked chapel with high walls. There were several comms installations close by. I set up the station on a stone seat with my back to the wall, sweating in the heat.  It was hard to believe with such warmth and comfort that I was in receipt of the winter bonus. Down to a T shirt I was, and still sweating... 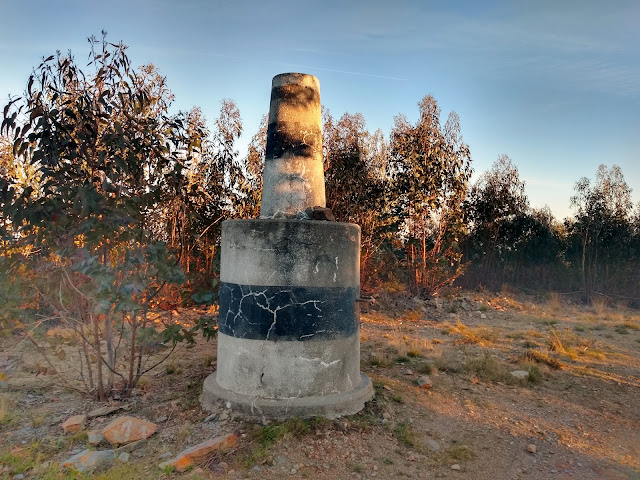 A five minute walk took us to the trig point for a 21 QSO activation before heading into Arouca, 5 Kms away for our dinner. It was almost dark when we got into town and we found a very quiet restaurant. After the meal it took around an hour to drive back to Porto. This was a most memorable SOTA day which we both enjoyed in the Portuguese March sunshine....
Posted by Phil G4OBK at 23:59