Another early rise on the day before we left Porto and a 30 minute drive out of the city took me to the suburb of Baltar. The summit of Vandoma (519m) is to the north of Baltar, it was reached after a short 10 minute walk with an ascent of just 50 metres. This took me to the communication site on the summit, but I set my station up in gorse bushes on the west side of the hill away from the commercial masts: 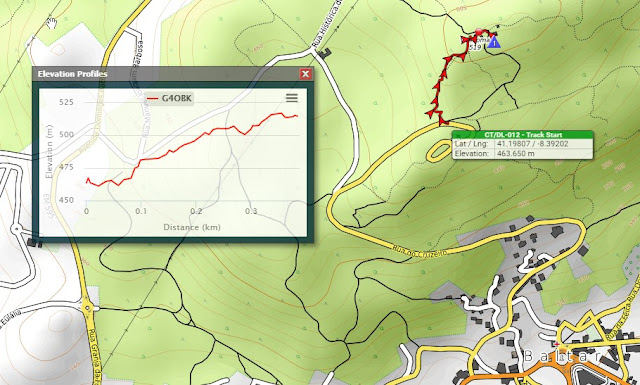 The GPX track is entered into the tracks section of the SMP. I went up on the rough path as pictured above, and walked down on the tarmac road shown in black on the map.
I was on the air by 0720z on the 40m CW band but the frequency was quiet and allbut closed. Eric F5JKK was the first contact, with other regulars GI4ONL, EA5/ON7QR, HB9CGA and DJ5AV following, before things went quiet on CW. A move to SSB produced just one contact with local operator Nuno CT2HOV, before I changed up to the 30m band where I made another 10 contacts before closing down.  I returned to the Hotel Trindade in Porto for my breakfast and a day touring the sights of the city. We left Porto the following day with a determination to return to the region next year, or possibly in Autumn 2019 if it becomes possible.
Posted by Phil G4OBK at 23:59