Breakfast was served at the Penrhos Arms in Cemmaes at 8.00 am. We left at 9.00 am having settled our bill. Before breakfast I studied the local map and found that the North Wales summit of Mynydd Cwmcelli GW/NW-052 was just four miles north of the Penrhos Arms. It was a summit which had escaped my attention until then, but with the weather looking seemingly drier than forecast we were hopeful of activating two "unique to us" summits west of Oswestry before heading for our homes north and south in the early part of the afternoon.

A lane leaves the A470 from Aberangell and takes you to a parking place for two cars at SH814105 just where the forestry track goes into Dovey Forest. The photo here shows the roadside parking spot where the recommended route to the summit of NW-052 leads off:
Once on the forest road take care not to miss the turn off on the right after 250m (which we did, slightly, we talk too much!). From here the lesser used track took us to SH808101 where fallen trees forced us into a detour around them and into the forest on the north side of the track: 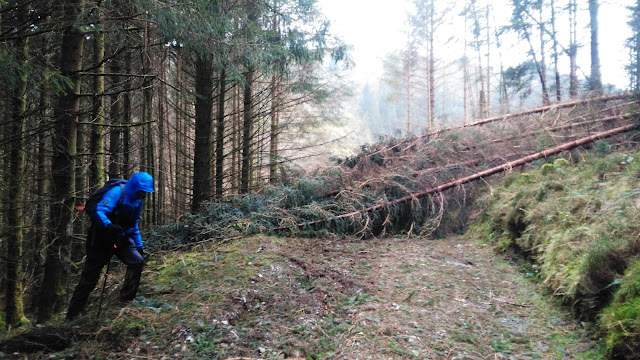 We found out why the trees had come down - forestry contractors had felled a large bank of trees on the north facing slope near our track, exposing the tall trees remaining there to the full force of the wind, so when the first big blow had come they had fallen. It happens a lot to adjoining sections of forests when partial harvesting takes place - here is the line of our track: 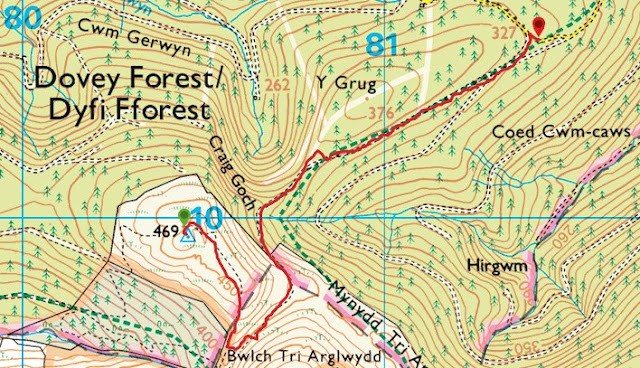 I would recommend walking the longer way to go via Bwlch Tri Arglwydd. If you are tempted to go up sooner you'll find it pretty steep... There are several hillocks around the summit area and evidence of motorbike traffic, which has made a mess of the terrain. The summit has a trig point: 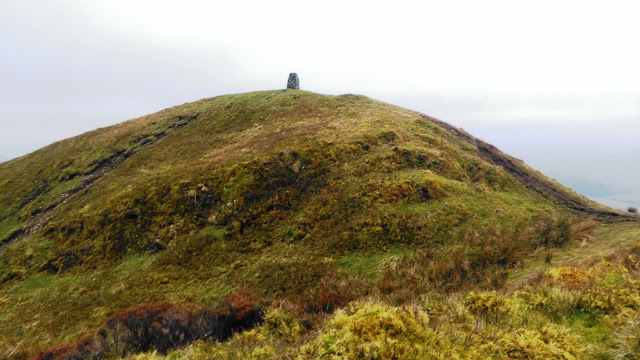 A brief ten minute session on 2m FM with the usual QRO mobile set up provided six contacts each. G0LGS and G4ILI in Cheltenham were easily worked. With a cold wind we didn't linger. It took 30 minutes to get back to the cars.

Leaving Aberangell on the A470 we made our way in the direction of Oswestry. It was a considerable drive which took around 40 minutes. Parking was at a turning point near the end of a public road leading into a forest north east of Llanwddyn - grid ref SJ052204. The last few hundred metres was a little rough but is easily passable in any car. Our cars are shown turned and ready for a quick getaway after our activation: 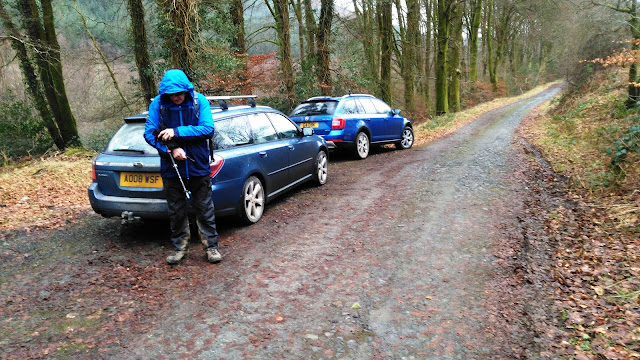 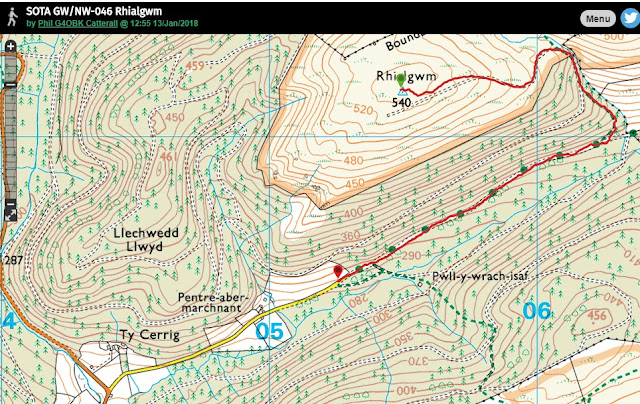 The route used was roughly two thirds forest track one third rough moor with quad tracks on the ground. You reach this gate at SJ061213 where you leave the woodland: 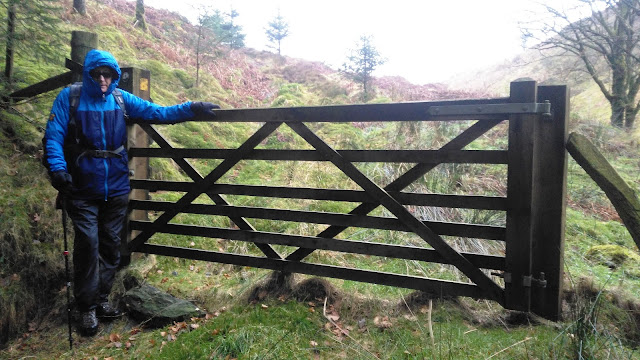 When we reached the summit and spoke to Matt G8XYJ, he told us about the amazing view from the summit. We could see nothing due to mist, so there was no point taking a photo there. We completed 9 contacts and again worked our two friends in Cheltenham.

With dry weather both days, it had been a very worthwhile 500 mile round trip for me to bag five more unique summits in Wales. The only problem for us both was driving in thick mist on the first day, getting from Geoff's QTH near Malvern to Pegwn Mawr MW-006. I had good journey back though and filled up my car on the way at Tesco in Prestwich, Manchester. It was 6.15 pm when I walked through the door back in Pickering.  I plan to return to the area in April where I am based for a few days on a walking holiday in the Elan Valley.
Posted by Phil G4OBK at 23:59