It's some years since I took part in an amateur radio contest... I was a member of Travelling Wave Contest Group from 2010 - 2013, and further back than that, from 1982 onwards I took part in many RSGB and CQ World Wide Contests in CW, SSB and DATA on a regular basis in my own right.

Since getting back on the amateur bands in January 2017 after moving house, I've wanted to see what I could work on VHF from my new location.
Despite having a temporary aerial set up 18 reasonably distant contacts were achieved this weekend from my location in Pickering, close to the North York Moors, in Maidenhead Locator IO94of. My garden is 60 metres above sea level. Each headset on this Google map represents a contact on either 6m or 2m: 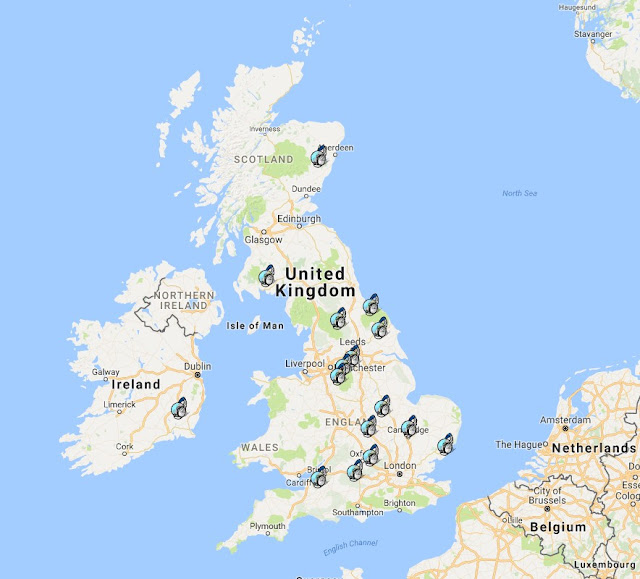 I operated for a few hours in the Fixed Station Sweeper (FSR) Section. The FSR section states that fixed stations cannot call CQ - we have to search and pounce on stations and try to work them after hearing National Field Day VHF contest stations calling CQ.

Best DX on 144 MHz was EI9E at 441 Kms, located betweeen Kilkenny and Wexford. Best DX on 50 MHz was G2BQY/P at 354 Kms, located just north of Shepton Mallet. The only station worked using Morse was GM4ZUK/P near Aberdeen, a distance of 321 Kms  on 50 MHz.

It was quite a surprise to work such distances on 50 MHz using a wire antenna, and I was pleased with the performance of the Cross Yagi on 144 MHz operating at just 4 metres above ground.

I did work one SOTA station on 2m SSB in the contest - this was GX0OOO/P operated by John Earnshaw G4YSS from Scarborough. John was on Great Whernside in the Yorkshire Dales and made contacts throughout the day on VHF in the contest and on HF also, including on the 1.8 MHz band (160m) where I also made contact using Morse and Voice Comms.
Posted by Phil G4OBK at 20:03