Having arrived in the Dolgellau area the previous day I decided we would choose an easy one point summit to start our weeks holiday in Snowdonia. I was wrong - it wasn't easy at all! The distance walked to the summit was only one mile - yet it took us an hour in hot weather to reach the highest point on the access land. Parking is available roadside on the B4405 outskirts of Abergynolwyn at SH 674067:

Leaving the B4405 a gated track joins a bridleway. At SH673071 we left the bridleway to tack up the steep hillside on the access land. Once the wall was reached surrounding the upland wood, we followed it up the best we could. It was a very hard one point climb to the summit, and I took a few photos on the way up: 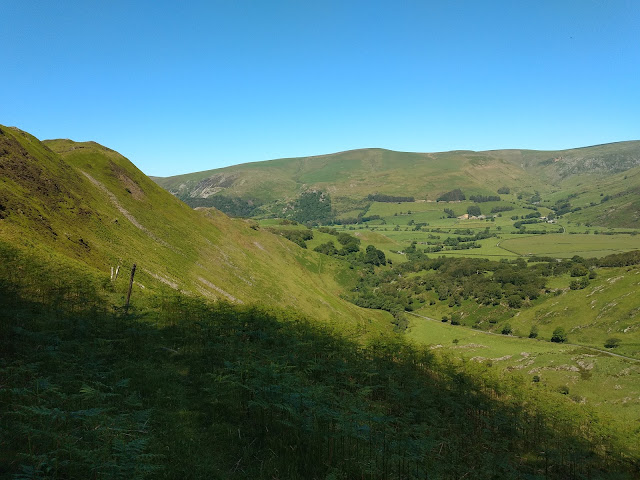 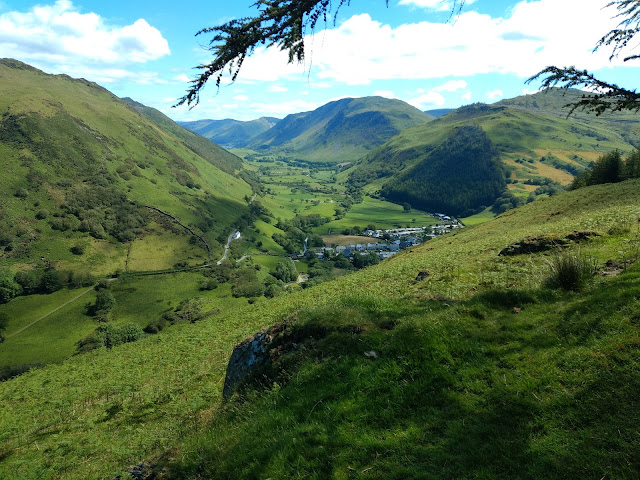 We were both hot and bothered after the one hour climb, so much so I failed to take any photos of the activation itself - I wasn't feeling myself due to a painful achilles tendon, something that has been bothering me for over a month. Switching on my Yaesu FT65E with RH771 whip was a delight though as I heard and worked Allan GW4VPX/P activating GW/NW-028 Creigiau Gleison. This was my only 2m contact - Gamallt is only 288m above sea level and surrounded on most sides by much higher summits. I went on to HF and was dissapointed by just one 60m contact with my friend Victor GI4ONL on CW. A spot by Victor and CQ calls on CW and SSB were fruitless, so I tried the other usual bands, 40/30/20m. Summit to Summit wise it was a successful activation all round, but the number of contacts - just seventeen, for the time on the air - over an hour, was dissapointing, however 20 minutes of that was spent setting up on HF with my Elecraft KX3 and link dipole:

After an hour my XYL had enough of reading her book and was being bothered by ants, flies and hay fever so I abandoned ship leaving SSB out of the activation and I packed up. Sunday's on 40m with a contest in progress is no place for a QRP SSB signal. Our lunch was back in the car and we needed it. A slightly lower level route was taken going down with the return leg taking less than 30 minutes which demonstrated how hard the stop-start climb up the hill had been for me... Power used on HF was 10 watts. There was good coverage on the EE Network on Gamallt, but zero coverage on Vodafone.
Both of us felt we had done enough on day one of our holiday, a second activation skedded for the afternoon was cancelled so instead, I drove back to the Cross Foxes pub at the A470/A487 junction near Dolgellau for ice cold refreshments in a temperature of around 25c.
Posted by Phil G4OBK at 23:59