I took a day out from a family visit in Cardiff to try to activate the last two of forty Marilyn Summits in Mid-Wales that I need for Summits On The Air (SOTA). Only one summit was completed, due to injury leaving GW/MW-020 Esgair Ddu for another day in 2-3 weeks time, when I am resident for a longer period near to Dolgellau.

I left Cardiff at 0715 a.m. on an almost three hour, 125 mile drive that took me along the now familiar and excellent roads through the Brecon Beacons, Builth Wells, Rhayader and Llanidloes. Then from Mallwyd roundabout (A470) I drove six miles eastwards on the A458 to the parking place, a wide gateway which leads to the summit of GW/MW-012 Carnedd Wen (523m, 2 points). 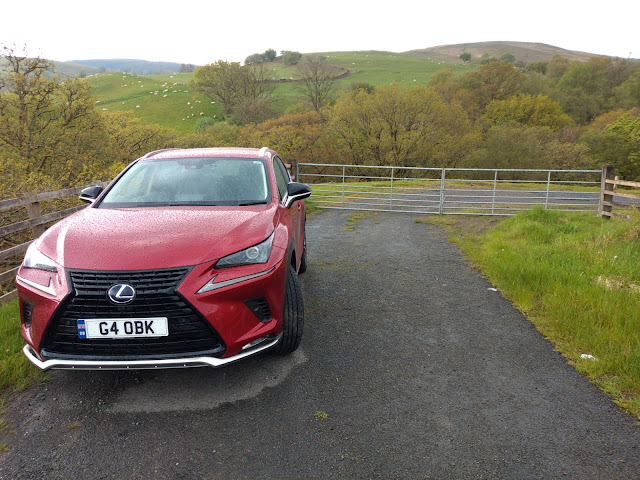 The locked metal gate at the parking spot, was one of three or four climbed that day, taking the walker on to a 3.5 mile track to the summit activation zone. The first real and immediate obstacle being a concreted sill ford - water depth was about half way up the tongues of my Scarpa's, so the feet remained dry. After a rainy spell this torrent could well overtop your boots I reckon: 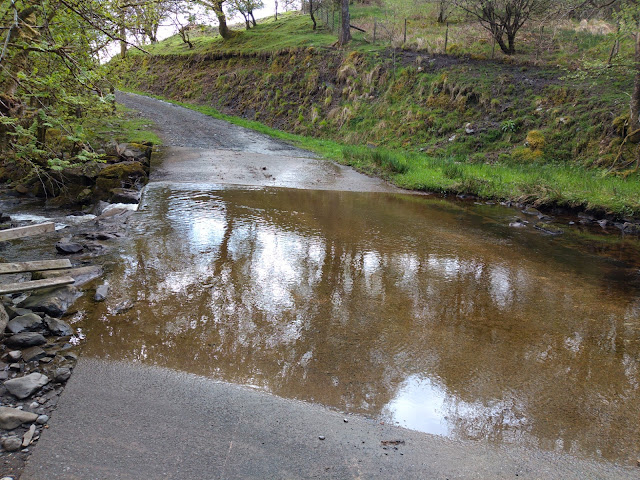 The graded track took me up across open fell and then into the forest. The navigation was straightforward, and the climb gradual and as easy as you could imagine. Within 90 minutes after 3.5 miles I was within the activation zone where a caravan had been parked: 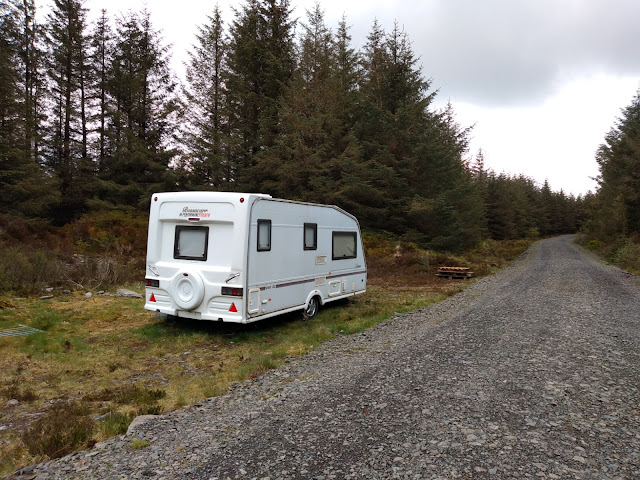 Some environmental land management was taking place as I came across packs of plantings stored on the track containing moss and suchlike, so I can only surmise that the caravan is there to act as either a crewroom or sleeping accommodation for the workers. It was a Bank Holiday weekend and I never saw a soul all day... By the time I reached the summit area my left leg achilles tendon was very sore and the final 200m spent locating the deliberately hidden trig point, involved dragging my hungry body and sore ankle over a peat bog making it worse. Rule for the future: "DON'T SKIP BREAKFAST".
The dull grey trig point had been masked by ploughing back the land - to create an ad-hoc quarry with pond, for forest roadstone within 6 feet of the trig and at least 10 feet higher. This higher terrain became the tieing off point for one end of my link dipole: 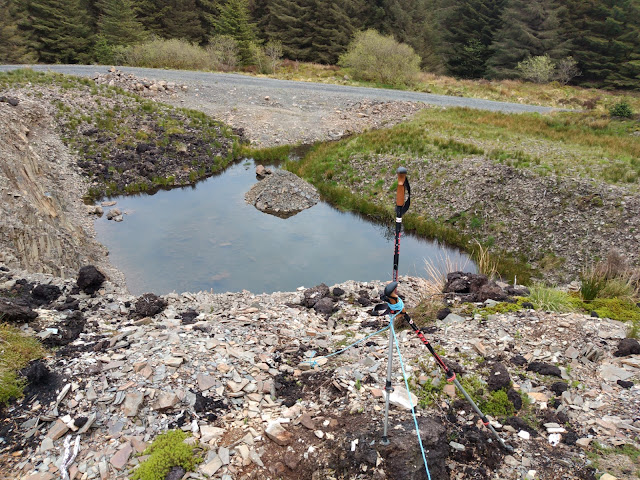 After climbing up and tieing off on top of the spoil heap I felt decidedly dizzy, so I sat down for 5 minutes to regain full conciousness (Don't tell the XYL!). I put this down to the pain from my achilles and lack of breakfast... The small pork pie and water I had at the start was insufficient to nourish the effort needed to reach the "summit" I thought. I knew at this point that one summit was all I could manage that day.... Completion of the GW/MW with MW-020 activated and chased would have to come on another day...
Time for some Radio then...
With time to spare having decided on this being a one summit day I switched on my recently purchased (Chinese made) Yaesu FT-65E. I bought this relatively cheap radio as it has a bigger battery pack than my other FT-4X (Also Chinese made). Both radio's also operate on 70cm which is a band I am unaccustomed to using. As I was setting up on HF I used the handheld with long dual band RH771 whip to work Dylan M7DST/P on Long Mynd G/WB-005. Then I heard Vicky MW6BWA/P and Rod MW0JLA/P call CQ from Great Rhos GW/MW-002 also on 2m. Two more lovely S2S QSOs with the added bonus of 59 reports both ways on 70cms as well! 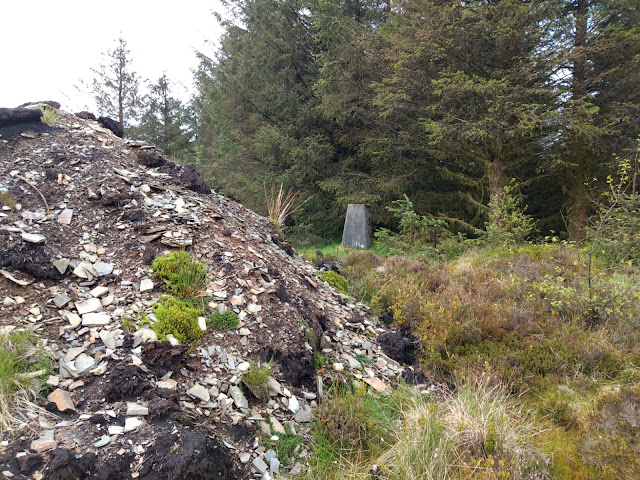 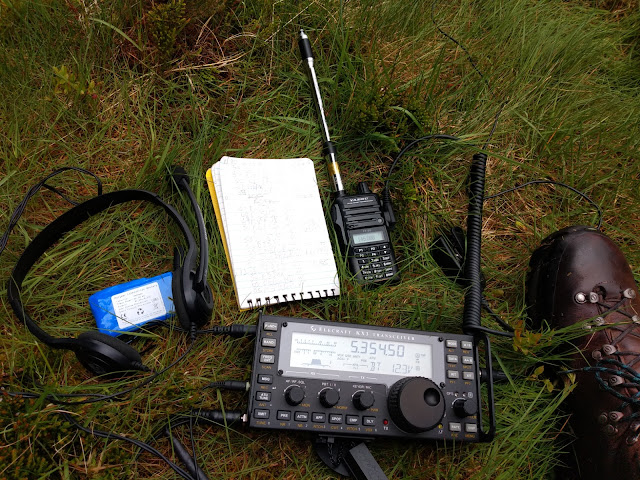 Time for HF action now and Victor, GI4ONL (Bushmills) was waiting at home for me to come on 60m CW, followed by another good mate, Nick G4OOE (Scarborough). A move to SSB and I worked another mate, Terry G0VWP (York) and continued to work my way through the bands on CW and SSB working UK and EU stations, avoiding 20m CW due to the CQ WPX Contest congestion. I finished with a good handful of welcome S2S QSOs. As I was packing up and monitoring S20 Jordan MW3TMX/P came on the air from nearby Garreg Llwyd GW/MW-014 to finish off my nice spell of SOTA activity with 45 QSOs. Jordan being on his 3rd summit of the day with another one to go later.
The way back down was painful walking with a limp and stiff leg and then when nearing the car I made matters worse, by slipping off a metal gate and slamming my sore left leg hard down on the ground. This meant the air turned blue with profanity but there was only I to hear it!  A golfing friend has suggested some exercises to repair and strengthen my achilles as well as rest and ice packs. I am hoping that this will be enough to allow me to resume activating in Wales when we return in June.
My drive back with a meal stop at the recently refurbished and much improved Burger King in Builth Wells was enjoyed, and I was back in Cardiff by around 7.45pm.
Posted by Phil G4OBK at 23:59