Reflecting back as I write this, months after our SOTA Tour of Moravia, I think Victor bounced back on day five of the tour. He still felt lousy but was not as debilitated after he got some tablets from a supermarket chemist counter early morning. For the first time in SOTA activating over 12 years I scored on 9 summits on HF in a day, total contacts in the day - 91, total points earned 46.  We started operating on our first summit OK/VY-063 at 0703z and I made my last QSO at 1545z. With two operators (G4OBK and G(I)4ONL) operating HF QRP independently with KX2s and link dipoles it was easy to quickly clear the 20m, 30m and 40m band of callers. Our style was to work SSB and CW and operate on at least two out of three of those bands. As soon as 3 CQ calls went unanswered after qualifying the summit, we packed up and moved off on to the next summit.  If one operator was still busy then the other operator went on to the 3rd band. The activity took place on the hills around the town of Zdar nad Sazavou: 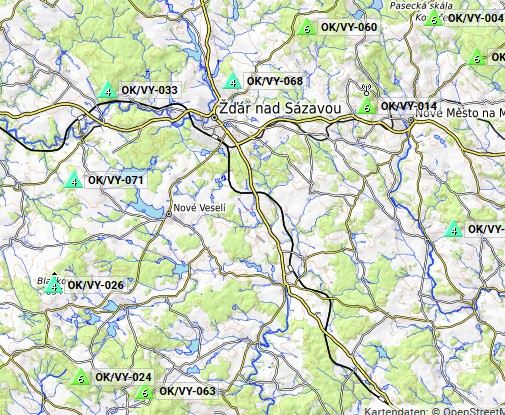